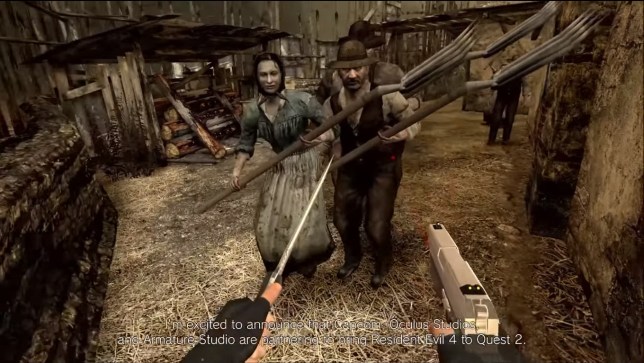 The Resident Evil showcase was full of good news for survival horror fans but the most surprising was a new VR version of Resident Evil 4.

For a long time now there have been rumours of a remake of Resident Evil 4, in the style of the Resident Evil 2 and 3 remakes, but that is not what this is.

Although the remake is almost certainly still going ahead Capcom hasn’t announced it officially, and instead the Thursday night Resident Evil showcase unveiled Resident Evil 4 VR for Oculus Quest 2.

Given the modest graphical abilities of the Quest 2 (since it’s wireless and so all the hardware has to be contained in the headset itself) the game still looks largely the same as the most recent remasters, except now it’s all first person and in VR.

There weren’t many details offered, other than that ReCore developer Armature are handling the game, as Facebook is planning to reveal all at the Oculus Gaming Showcase on Wednesday, April 21.

Given how difficult movement can be in VR games, with many relying on teleportation to avoid nausea, this new version may offer a useful workaround for Resident Evil 4’s old tank controls, which as outdated as they may be, are responsible for maintaining the pacing and rhythm of the original game.

Remake Resident Evil 4 has always been a thorny subject, but it could be that this sideways step works out better than a complete ground-up remake.

There’s no indication of when the VR game will be released, although that information may come next week. It’s also unclear if the game will ever be released on PlayStation VR but it certainly sounds like an Oculus timed exclusive at the very least.