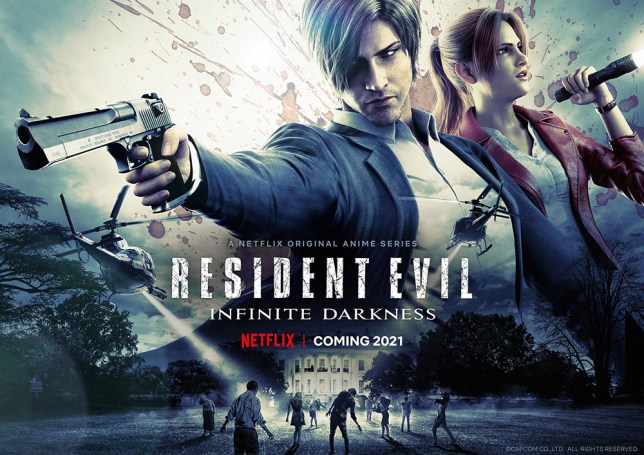 As well as the two lead actors, new plot details have been revealed for the Resident Evil: Infinite Darkness Netflix show.

As a reminder, Infinite Darkness is an animated series and stars Resident Evil regulars Leon S. Kennedy and Claire Redfield as its two main leads, making this the first time the two characters have interacted since Resident Evil: Degeneration, the 2008 animated film.

Not only that, but fans will be pleased to learn that their respective actors, Nick Apostolides and Stephanie Panisello, who voiced the characters in the Resident Evil 2 remake, will be reprising their roles.

Resident Evil: Infinite Darkness is bringing back the RE2 remakeâs Nick Apostolides as Leon Kennedy and Stephanie Panisello as Claire Redfield. pic.twitter.com/qjIa13hfZc

The announcement on Twitter also shows a couple of stills and a new poster for the show and the official Resident Evil website has some plot details explaining exactly what Infinite Darkness is about.

It takes place in 2006, a year after the events of the Degeneration movie, and begins with Leon investigating a hacking incident at the White House, where he and his team are suddenly attacked by zombies.

Around the same time, Claire, who is providing relief support to refugees in another country, receives a drawing from a child that appears to depict a victim of a viral infection.

Leon and Claire reunite and, according to the synopsis, discover that the zombie attack at the White House and the child’s drawing are somehow connected.

The series is expected to release sometime this year but there’s no exact date. Netflix will be presenting a panel at the AnimeJapan consumer show on March 27, so it may be revealed then.

That’s not all fans have to look forward to this year. Not only is Resident Evil Village due to release in May, but a new live action movie is on track to release in September, acting as both a reboot of the Resident Evil movie series and a much more faithful adaptation of the games.