Nintendo and Fujifilm have collaborated on an app for the Instax Mini Link that lets you print out your Nintendo Switch photos.

When the original Pokémon Snap released for the Nintendo 64 in 2000, you could take the cartridge to a Blockbusters and have the photos you took in-game printed out (in the US and Japan at least).

That’s obviously not possible nowadays but, with the long-awaited sequel finally releasing this month, Nintendo has recognised that fans may want something similar and has made a special printing app for the Instax Mini Link.

Made in conjunction with Fujifilm, the smartphone app lets you send any photos you’ve taken on the Switch to your phone, which can then be printed out through the Mini Link, either to decorate your room with or pop into your phone cover.

The app will release on April 30, the same day New Pokémon Snap releases, and Fujifilm will also have two new printer models for sale. One’s a simple ash white coloured one with red and blue highlights (a reference to the original Pokémon games maybe?), but it’s the other that’s bound to get snapped up quickly, since it comes in a Pikachu shaped case.

Despite the obvious tie-in with New Pokémon Snap, you won’t be limited to just that game. It seems any photo you take using the Switch’s snapshot feature can be printed out, with the official website using Animal Crossing: New Horizons and Super Mario 3D World as examples.

The app also comes with multiple frame prints based on Super Mario, Animal Crossing, and New Pokémon Snap, which can be used for selfies and other photos.

The app is compatible with all Instax Mini Link models, so no need to worry about buying a new one if you already own one. For those looking to get one though, they usually retail at £109.99. 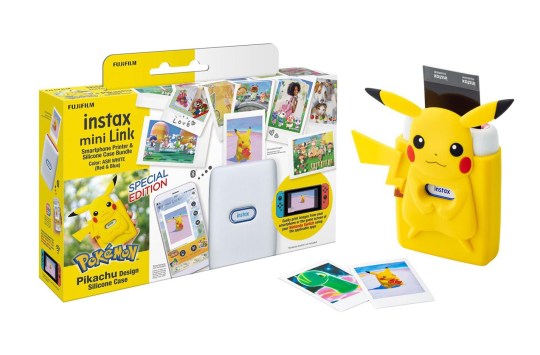