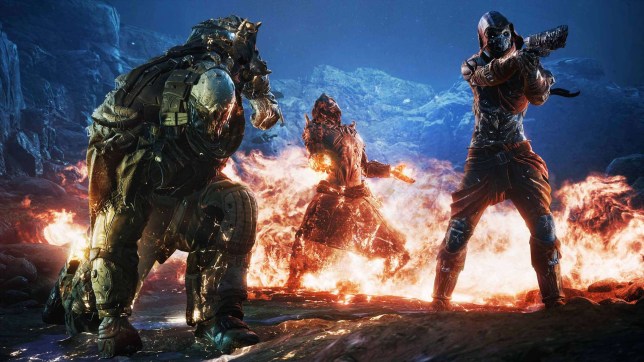 People Can Fly is giving away some free content to Outriders players, to make up for the server issues that have plagued them since launch.

Despite being an obvious amalgamation of various other shooters, Outriders manages to not only stand out from the crowd but also be an enjoyable game in its own right.

It already seems to be more popular than Square Enix’s other co-op looter game, Avengers (at least on Steam). But its launch has unfortunately been scuppered by severe connection issues, with many players being unable to access the servers. And since Outriders requires an online connection, this meant many couldn’t play the game at all.

As you’d imagine, developer People Can Fly is already working on a patch that will address the server problems, as well as fix other issues. In addition, it intends to give launch window players a small ‘appreciation package’, basically free content as an apology for the issues.

There’s no scheduled date for when the package will be handed out, but the plan is to give each player’s highest levelled character a level appropriate legendary weapon, a level appropriate amount of titanium (the rarest resource in the game), and the Frustration emote.

Said emote is currently unobtainable and even People Can Fly acknowledges the irony of it, stating that this wasn’t intentional on its part. The studio notes that the contents of the package may change depending on how technically feasible they are to do.

The package will be eligible for anyone who has played Outriders between March 31 and April 11. However, any players who experience the automatic inventory wipe restoration will receive it as well.

This is being done in response to a bug that has been wiping players’ entire inventories. People Can Fly aims to restore affected inventories in the near future, but this won’t apply to items that ‘were acquired but where the game connection was terminated before an autosave could complete.’

The full details regarding the upcoming patch, other re-balancing plans, and a breakdown of what exactly was causing the server issues in the first place can be found on the official Reddit.