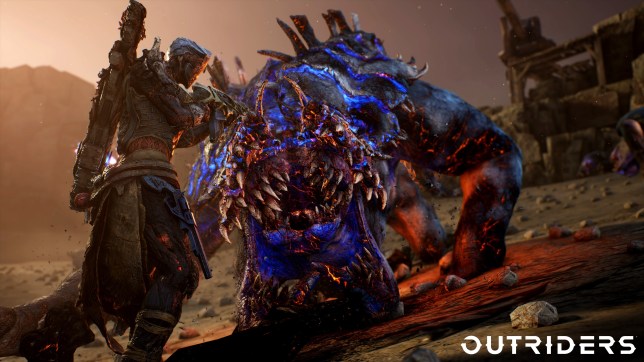 Even those who haven’t been affected don’t want to continue playing (Pic: People Can Fly)

People Can Fly has patched Outriders but it has failed to remove an awful bug that’s wiping hours’ worth of progress.

Outriders certainly had something of a rough launch. Connection issues prevented many from being able to play the game at first and a nasty bug has been deleting entire inventories.

Developer People Can Fly has been working to fix these issues and, at first, it looked like things had mostly been resolved. The PC and PlayStation 4 versions were patched not too long ago, and a PlayStation 5 patch went up this morning (a patch for the Xbox versions is still in progress).

Unfortunately, it’s been reported that the aforementioned inventory wipe bug has persisted, with many unlucky players claiming that they have lost tens of hours’ worth of progress and grinding.

‘Since the recent patch we have seen an increase in reports of this issue – resolving the inventory wipe is our top priority and will remain so until fixed,’ writes People Can Fly on Reddit.

It reiterates that it intends to restore lost inventories in the future, but not without some caveats. For example, restored items may not have the same stats that they had when they were lost.

We are aware and deeply sorry that some users are continuing to encounter an inventory wipe.

We are doing everything we can to resolve this issue, both server and game-side.

Our plan is still to work on a restoration for all affected accounts – details:https://t.co/7DZulERIkm

Judging by some of the responses on Twitter, players are at a tipping point, with many openly expressing their anger with the situation and others making unfavourable comparisons to Anthem and Cyberpunk 2077 when they launched.

Is this what gaming has come to? The standard? Release a half assed final product of a game and consistently update/patch it? Don’t get me wrong, your communication has been aces, but that doesn’t excuse the unfinished product. I knew the demo was a warning.

I want a refund so badly, your game had all of the right mechanics and ideas to be something truly decent. But instead you released it in a state that has deleted mine and many other players past week of gameplay and grinding. Truly unacceptable. Worse than Cyberpunk IMO.

The worst multiplayer experience of my life !! You make Anthem look like the game of the century. Continuous disconnections, crashes and when you are lucky to find someone to play with the game for some reason has an unacceptable lag . On top of that my inventory was wiped .

Currently, there’s no timeline for when players can expect the bug to be fixed or for inventories to be restored. Ideally, People Can Fly can get this resolved soon because the longer it’s left like this, the more players it risks losing.

Get £140 in FREE bets for boxing showdown