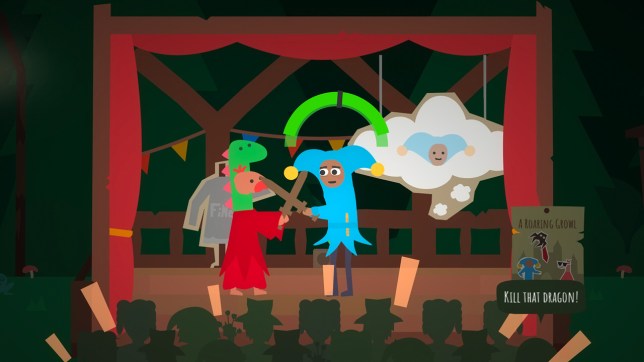 Once Upon A Jester – whose line is it anyway? (pic: Crunching Koalas)

Perform improvisational theatre across a fantasy kingdom in one of the funniest and sweetest games of the year.

Plenty of games feel like passion projects, but few are able to project the sense that they were a joy to make quite as well as Once Upon A Jester. As the darker side of the industry has become more widely obvious in recent years, from the long work hours of the ‘crunch’ to the disposable why in which whole studios are treated by publishers, it’s become harder to divorce the sacrifices involved in the creative process from the final product – even when the end result is designed to be uplifting escapism.

Once Upon A Jester is a theatrical musical adventure developed by four Dutch musicians at the studio Bonte Avond, and the joy in its bones radiates from the first note. You play as the aptly named Jester, who takes up performing improv theatre with his best friend Sok across a fantasy kingdom, to score an invite to the royal palace so they can steal a coveted diamond. As you perform for various zany inhabitants, Jester and Sok start to question their intentions and begin to appreciate the art of performing itself.

In the spirit of improv, as noted by the developers in the recent Indie World showcase, the dialogue used in the game is often the first take. Some lines have cracks of laughter during bad puns, exaggerated voices feel invented on the spot, while the delivery can fluctuate on a whim. It’s loose, silly, and charming even when it doesn’t quite land, like you’re in the company of mates trying to make each other laugh via the dumbest means possible.

Most of the characters are voiced by the developers, including musical numbers, but there’s also some cameos from Twitch and YouTube stars, including Karl Jacobs, Foolish Gamers, and Corpse Husband. Coupled with the paper art aesthetic, reminiscent of South Park, there’s an endearing DIY quality to both the production and the humour – which also takes cues from the surreal, loony vibe of Adventure Time.

Improvisation can easily become self-indulgence, yet the approach here works because it’s baked into the mechanics. Once Upon A Jester is mostly structured around interacting with characters in an area, like a seaside port or a forest, and performing shows to earn flower bouquets for progression. While mingling among citizens, dialogue symbols pop up to indicate the genre the audience that day will and won’t respond to, from romance to horror, action, drama, and others.

Once you feel confident about the audience’s tastes, you can prepare the show. You first have to design a poster that sits on the side of the stage, which is basically a fun, elaborate menu to decide the scenario you’ll perform. You can also decorate these posters with stickers you unlock through interactions with characters and completing performances. Both the design and the stickers used are entirely frivolous, but it adds some cosmetic incentive to pursue the various branching paths once the show begins.

After you’ve chosen a scenario, the show can begin. At numerous points throughout, you’re given a choice on how you want to progress the story, whether it’s adding a love interest, a dramatic plot twist, or jumping into a musical number. These are tied to different genres, so you’re rewarded by meeting and executing on the wants of the audience.

Each time you select a direction of the story, you typically have to complete timed button prompts or pull off a small mini-game, like balancing stones or winning a pretend sword duel, to earn the highest amount of bouquets. These skits are best when dialled to extremes, like an improv recreation of giving birth or a musical number where you literally sing your heart out on stage, to the point where emergency services are called in to rapturous applause. 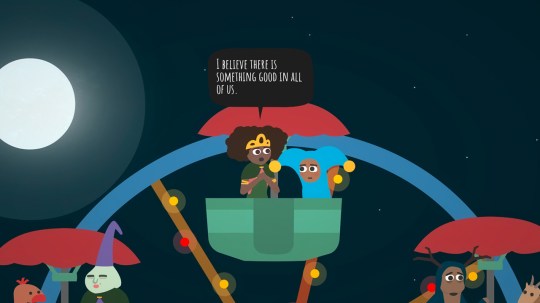 Once Upon A Jester – a touching moment (pic: Crunching Koalas)

If you fail these mini-games, the end result is often just as funny. When we were tasked with flying like a phoenix by tapping a button while avoiding the roof, a failed attempt resulted in the curtain closing on our abrupt drop to the floor. The heckles from the audience add another layer of silliness to it all, from comically mundane observations to over enthused cries of ‘Rip out those dragon guts!’, while Sok runs around dressed in a dragon hat.

The humour almost threatens to become exhausting over several hours, but it’s balanced out with some surprisingly tender moments. A piano-led ballad on a Ferris wheel ride, about finding your role in the world, is disarmingly sweet, like when you find a children’s movie unexpectedly affecting. Many of the songs channel the same heartfelt tone and it’s always effective, especially in the context of Once Upon A Jester’s collaborative creation between band-mates.

However, for all its charm, it’s disappointing when the gameplay doesn’t feel as well realised as the presentation. There’s only four show scenarios in total, while the mini-game actions do become repetitive when you’re re-running the same scenarios. It’s never a chore, but it feels like a missed opportunity to make the improv moments more dynamic and surprising, to match the personality elsewhere.

At roughly three hours long, Once Upon A Jester is short and sweet, yet unlike anything else out there. Everyone’s quick to celebrate games when they tackle serious or sensitive issues, but it’s refreshing and uplifting to play something which feels like a by-product of a laugh between friends. This hilarious and thoughtfully designed musical journey is a cosy campfire tonic and an important example of the sheer range of modern video games, in terms of subject matter, tone, and gameplay.

Once Upon A Jester review summary

In Short: A fantasy musical adventure which has big laughs to match its big heart, while being built around charming, if shallow, gameplay mechanics.

Pros: Laugh out loud funny throughout, thanks to its endearing writing and bonkers voice cast. A novel premise with interesting mechanics. Some surprisingly touching, and infectious, songs.

Cons: Gameplay does feel undercooked and suffers from repetition due to the small amount of show scenarios.