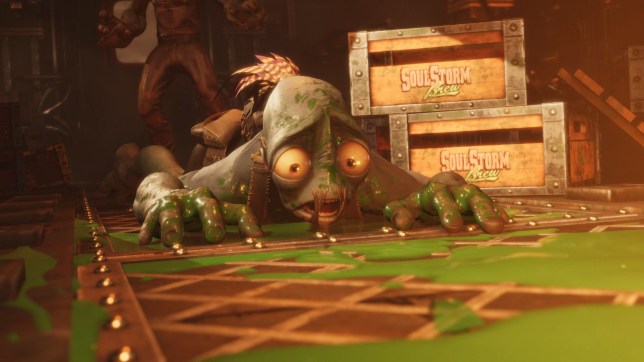 Oddworld: Soulstorm – Abe is back at last (pic: Oddworld Inhabitants)

The sequel to Oddworld: New ‘N’ Tasty is more than just a remake, as Abe leads his fellow mudokons into their biggest adventure yet.

If there’s one thing you can say about Oddworld fans it’s that they must have a lot of patience. The first game came out on the original PlayStation in 1997 and got an extensive remake, in the form of New ‘N’ Tasty, in 2014. It was one of the best remakes of the last generation and the original plan seemed to be to remake 1998 sequel Oddworld: Abe’s Exoddus fairly soon after. Except somewhere along the line that plan transformed into Oddworld: Soulstorm and a seven-year wait.

Soulstorm is a reimagining of the story from Exoddus but apart from broad stroke similarities it is essentially a brand new game. It uses the same basic 2D graphics and gameplay as New ‘N’ Tasty but expands on the abilities of protagonist Abe, while also increasing the scale and complexity of the story and its presentation.

Exoddus itself was an expansion pack style sequel, forced upon developer Oddworld Inhabitants by its then publisher, and not part of the original Oddworld roadmap, so using it merely as a touching-off point for this new game makes plenty of sense. In that sense Exoddus was never as essential as the other games, the question is whether Soulstorm will be either…

First impressions of Soulstorm are decidedly mixed. The first thing you’re confronted with is the game’s extraordinarily good cut scenes, a reminder that an Oddworld animated movie has come close to happening a number of times. In terms of visual artistry they’re fantastic, but the storytelling makes little compensation for the fact that it’s been seven years since the last game and assumes the newspaper headline intro will bring you instantly up to speed with the fact that you’re controlling a little alien guy who has just helped 300 members of his slave race escape their captors.

The game’s anti-capitalism message isn’t subtle, including allusions to real world atrocities, but it’s heartfelt and feels engagingly different to the video game norm. The gameplay does too, although that’s in part simply because the Oddworld template is an old one and puzzle platformers like this don’t really exist anymore.

The first two Oddworld games were influenced by 16-bit classic Flashblack and worked in a similar fashion, with flick screen levels. The gameplay in these new games is still 2D but now the levels scroll smoothly in both directions and even feature expansive hub areas. Although the other problem with the opening is just how dull the initial cave environments are and while things get considerably more interesting later on Soulstorm’s grip on you at the start is rather weak.

By default, Abe has no way of defending himself and instead has to creep around, avoiding enemies or tricking them into running into a trap or shooting each other. Abe has always been a frustrating platform character to control and while, in story terms, he was never presented as a superhero he has so much inertia when he moves that he can often seem frustratingly clumsy – although the generous double jump move does offers some compensation for the lack of precision.

Abe’s existing ability to possess enemy creatures is now accompanied by a new crafting system, where background objects and downed enemies can be rifled through for loot, which can then be turned into disposable objects, from Molotov cocktails to landmines. These more offensive abilities are balanced by the new Quarma system which not only tracks how many allies you save but how many enemies you kill, so how violently you choose to play is acknowledged by the game.

With more open-ended level design than before, and some satisfyingly well-hidden secrets, finding and rescuing your mudokon friends is highly engaging but it’s the complexity and variety of the puzzles that is the most enjoyable element in Soulstorm. The additional new weapons and items increases the range of options for each encounter, so even where there is a specific solution there’s still plenty of latitude in how you get there.

Possessing enemies to use their unique abilities, including flight and various ranged weapons, is great fun in itself but it’s usually part of a more complex scenario involving opening doors, disabling traps, and getting mudokons to an exit portal. At its best it’s a perfect blend of 2D retro gameplay and modern presentation, with consistently imaginative set pieces that introduce new elements or make you think about existing ones in new ways. 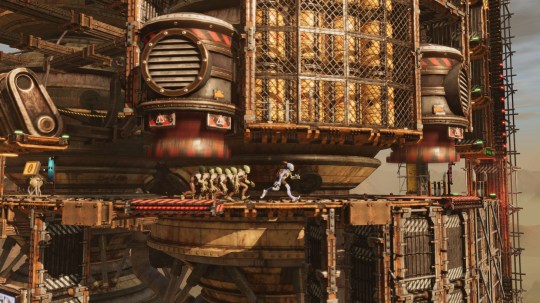 Where things stumble is with trying to reflect the fact that the older games were very difficult. Soulstorm is too, at least by modern standards, but often in frustrating ways. The platforming is one thing but there’s also a strong random element to many of the bigger sequences that often feels unfair, especially when you’re trying to rescue mudokons.

The simplest way to summarise the issues is that the game feels strangely unfinished, despite how long it’s been in development – as if it still needed a few months of final polish. Reviews were delayed not only by copies being sent out late but the wait for a major patch to fix what were, at launch, fairly significant bugs. The game’s much more stable now but there’s still lots of little problems such as poorly placed, and occasionally glitchy, checkpoints and awkward use of the camera when aiming into the screen.

There’s also an overreliance on context sensitive buttons that makes everything from looting a bin to bringing up the inventory less of a certainty than you’d like. None of these problems are serious in their own right, not even the occasionally faulty artificial intelligence of the mudokons you’re trying to save, but they do all add up to a low level feeling that the game’s not nearly as refined as it could be.

Many, if not all, of the faults may be fixed with subsequent patches but after all this wait it’s unfortunate that, for the sake of a couple of months, this has missed its chance for a more unequivocal recommendation. In the end, Abe probably should’ve delayed his exodus just a little bit longer.

In Short: A highly enjoyable platform puzzler, with some cleverly complex set pieces and great presentation – but it lacks that final layer of polish that could have made it something really special.