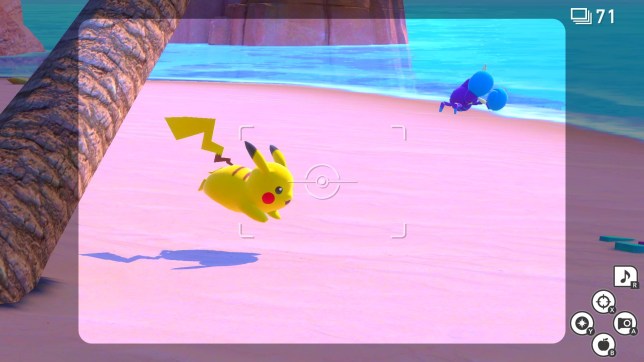 The most requested Pokémon sequel ever finally becomes a reality, as GameCentral gets a behind the scenes look at the new Pokémon Snap.

Everyone has their dream video game, that elusive sequel or concept that they’ve always wished for but which shows no sign of ever becoming a reality. Our number one choice would be an Elite style Han Solo simulator but following close behind is a new Pokémon Snap, something that we’ve badgered Game Freak about every time we’ve met them, but which has only recently been announced. We still don’t know why it’s taken so long but the best lightgun game never made finally has a follow-up.

The original Pokémon Snap was released way back in 1999, as one of the very first Pokémon spin-offs, back at a time when Gen 1 was the only one that existed and the spin-offs were all of an unusually high quality. Pokémon was already an established phenomenon by that point (the first Game Boy games came out in early 1996) but it wasn’t quite the formularised corporate product that it’s inevitably become today.

In the early days of Pokémon the various creatures were treated much more like real, living animals. Pokémon Snap emphasised that by showing them in their natural habitat, where you only had a limited level of interaction with them and absolutely could not catch them. That’s true of the new game too (which Nintendo are, for some reason, keen to categorise as not a sequel) which does have new ideas of its own but generally sticks very close to the original template.

Much as Detective Pikachu showed pokémon going about their daily business in a city environment, Pokémon Snap shows how they act out in the wild. That’s not something you see in the mainline games, where even in Pokémon Sword/Shield they’re just wandering around aimlessly within a very small area. Pokémon Snap though is designed like a sort of interactive nature documentary, as you watch pokémon lazing around in the sun, foraging for food, and getting into fights with each other.

Your role is simply to photograph them for the local Pokémon professor, who wants to catalogue the various species and discover the secret behind the ‘Illumina Phenomenon’ that’s given certain pokémon a kind of bioluminescence. The game runs on-the-rails as you get into a golf cart-like vehicle called the NEO-ONE, that takes on you on a slow safari around one of several different islands. It’s then up to you to simply look around and try and take the best and most revealing photos possible.

In other words, it really is just like a lightgun game, only you’re shooting photos instead of bullets. The pacing is more languid than The House Of The Dead but things can still happen very quickly when a large or aggressive pokémon suddenly appears and riles up the others. If it wasn’t for the coronavirus we’d have been able to try the game out for ourselves but watching footage of someone play an early level set on a beach the action seems to be well orchestrated and full of secrets that demand multiple playthroughs to uncover.

The level we saw was only a few minutes long, just like the originals, but not only are there lots of different stages featuring various biomes, including desert and snow, but there are multiple different paths through each one depending on the time of day and how you interact with the pokémon. As in the original you can throw a berry at pokémon in order to coax them out to eat it, but you can also hit them with it, which often angers them, or hit objects in the background.

You unlock new abilities as you progress, including an equivalent of the pokéflute, but there’s also the new ‘scan’ ability which works a bit like detective vision in terms of highlighting pokémon and interactive elements. The scan itself also seems to act as a kind of generic interact button, although it was hard to gauge exactly what its limitations are without playing the game ourselves.

The original had a puzzle-like element to working out how to photograph rare pokémon, or to get ordinary ones to perform unusual actions, and again it was hard to judge how much New Pokémon Snap handles that aspect, in this case because the beach level was one of the earliest and simplest. Getting surfing Raichu into a position where you could take a good photo of it seemed to require a fair amount of preparation though, involving throwing out apples for Sandygast and creating an impromptu sand dune.

Special ‘Illumina Orb’ can also be thrown around too, which suggests there is a fair amount more to the game than just sitting and watching pokémon capering about. There’s also two levels of photo editor involved, with plans to allow you to upload images and share them with other people. We also liked that when playing the game in handheld mode you can use gyro controls and move the console around like an actual camera (how there was never a Pokémon Snap on Wii U we’ll never know).

Pokémon Snap was never intended to be a deep or complex game, but it was a thoroughly charming and enjoyable one, and New Pokémon Snap seems to understand its appeal very well. The graphics are impressively good for the Switch and there’s even proper pre-rendered cut scenes with voice-acting, that put to shame Pokémon Sword/Shield’s amateurish efforts.

With the promise of over 100 pokémon and plenty of different stages, all with multiple different paths through them, New Pokémon Snap seems to be exactly what fans, including us, have been waiting for. Although back in 1999 technology was so limited that part of the appeal of the game was the way it hinted at the realities of the wider pokémon world and how you might interact with it – at a time when the mainline games where still 8-bit Game Boy titles.

New Pokémon Snap doesn’t go beyond its remit but with the newly announced Pokémon Legends: Arceus it seems as if The Pokémon Company is finally starting to explore the potential of Pokémon with more advanced technology and gameplay concepts. If New Pokémon Snap helps to further that direction, while also being a worthy sequel to a beloved spin-off, it’ll be doing very well indeed.