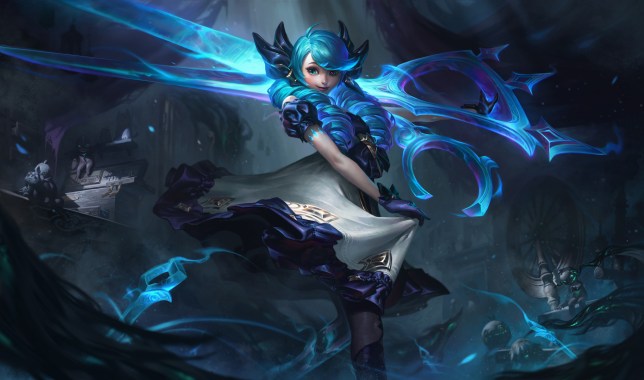 The Hallowed Seamstress, Gwen has had her full kit revealed (Picture: Riot Games)

League of Legends (LoL) will release its 155th champion on Patch 11.8 and we now know what to expect from Gwen as all of her abilities have been disclosed.

The Hallowed Seamstress is the first of three champions being released this year whose lore tie into the previously released champion, Viego.

Gwen’s biography reveals she was a doll created and stitched together by Viego’s wife, Isolde. Following Isolde’s death, Viego attempted to resurrect her only for Gwen to be accidentally turned into a real human with Isolde’s soul now a part of her.

In-game, Gwen will primarily act as a top-laner with strong skirmishing tools thanks to her giant pair of scissors and control over an ancient and protective magic known as the Hallowed Mist. Her full abilities can be found below.

Gwen’s basic attacks deal bonus on-hit magic damage based on a percentage of her health. Basic attacks against champions will heal her for some of the damage dealt. pic.twitter.com/zIEJe3imeD

Gwen’s passive is pretty simple, especially compared to some of the other champions that have been recently released.

Her basic attacks deal bonus on-hit magic damage based on a percentage of her health. Any auto-attacks on champions will heal her for some of the damage dealt, allowing her to take extended trades in lane.

Gwen rapidly snips her scissors between two and six times, dealing magic damage in a cone. At a minimum, Gwen will snip twice, adding one snip per basic attack Gwen has landed on an enemy (up to four for a total of six)! pic.twitter.com/4YKzneVtA3

Her first active ability is an AoE attack in a cone as Gwen attacks with her scissors between two to six times. The ability adds a snip for each time Gwen has recently auto-attacked an enemy (up to a maximum of four times for a total of six damage-dealing snips).

The ability applies the bonus magic damage from her passive and also deals true damage to any enemies caught in the centre – making it a very useful move for taking down tanks.

Gwen spins up the Hallowed Mist to surround her for five seconds, gaining some armor and magic resist when in it. Enemies outside the Mist cannot target Gwen or hit her with any abilities. The mist will move to follow Gwen the first time she tries to leave it! pic.twitter.com/Vh9l3gCscQ

Gwen’s W appears to be an extremely powerful move. The Hallowed Seamstress summons a small zone around her for five seconds that grants bonus magic resist and armour while she is in it.

But more importantly, while Gwen is in the small circle, she cannot be targeted or hit by any abilities from enemy champions that are outside the area. The first time Gwen leaves the mist, it will follow her position but it will disappear the next time she moves out of the zone.

Gwen dashes a short distance and empowers her attacks with increased range, speed, and on-hit magic damage for four seconds. Attacking an enemy during this time refunds 50% of this abilityâs cooldown. pic.twitter.com/vCUAggxzLL

If Gwen attacks a champion during this time, the cooldown of this ability will be decreased by 50%. This means Gwen is going to be especially potent at chasing down kills.

Gwen can cast Needlework up to three times, but needs to hit an enemy within 8 seconds to unlock each subsequent cast. Each cast fires needles in a line that deal magic damage, slow enemies, and apply Gwen’s Thousand Cuts bonus magic damage. pic.twitter.com/se9X2j2HyN

Finally, we have Gwen’s ultimate ability. Her R will fire out giant needles in a straight line which deal magic damage, slow enemies, and apply the bonus damage from her Thousand Cuts passive.

The unique twist is that the ability can be cast three times though there is a catch. Gwen needs to attack an enemy within eight seconds from the previous cast to access the next use.

But, the ability almost becomes more powerful with each recast. The first activation sends out just one needle while the second will fire out three, and the final cast will send out another five for a total of nine damage-dealing needles. 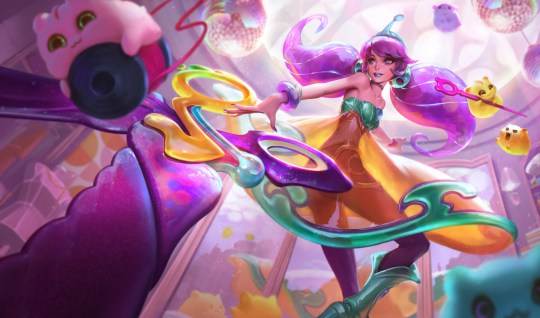 Gwen’s first skin will be from the Space Groove line (Picture: Riot Games)

It shouldn’t be long now until LoL players will be able to playtest Gwen on the Public Beta Environment as well as get a first look at her first skin which will be part of the Space Groove line – this year’s April Fool’s set of alternate costumes.

Until she reaches the PBE, we won’t know the full extent of Gwen’s damage numbers or how long her cooldowns will be but the early signs suggest that her kit will be very powerful in the hands of mechanically-talented players.