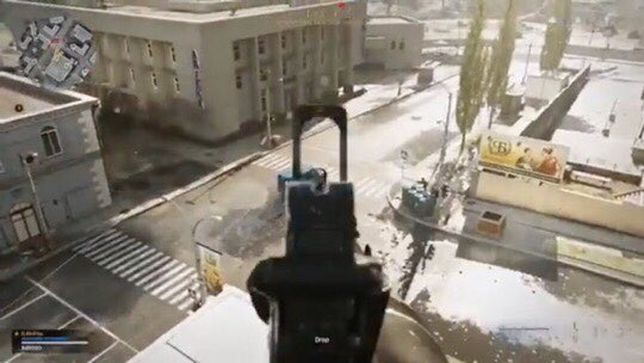 Call Of Duty: Warzone – going back in time (pic: Twitter)

Footage from the new map that will replace Verdansk in Call Of Duty: Warzone has appeared online and it looks… very 80s.

There’s almost nothing about Call Of Duty that doesn’t leak out well in advance of an official announcement and that certainly goes for the rumoured new Warzone map, that will be replacing the current version of Verdansk.

You can tell this leaked trailer is real too, because Activision has been making a huge effort to remove it from the internet – even though it doesn’t really show anything very unexpected.

Rather than a completely new map the new version features many similar landmarks to the original, just dialled back several decades, including the stadium part way through construction and a simpler aqueduct instead of the dam.

Downtown Verdansk, as well as areas like the airport and TV station, have also had an 80s makeover but you can still see it’s fundamentally the same map underneath.

There are some brand new areas though, including a new radar installation and what seems to be a mine. The video clip is only short, so there’s probably more than that too.

The new map is expected to go live at the end of the current season, probably on April 22, as part of an in-game event involving nukes.

The 1980s setting is meant to tie-in to last year’s Black Ops Cold War game and if not for the pandemic would’ve been added a lot sooner.

Activision has said before that the idea is that Warzone will constantly change to reflect the latest Call Of Duty game but they’re now getting badly out of synch.

What that means for this year’s game, which is believed to have a Second World War setting, is unknown but while it’s normal for Call Of Duty games to be announced around April or May, it’ll probably be several months till we get an official announcement this year.