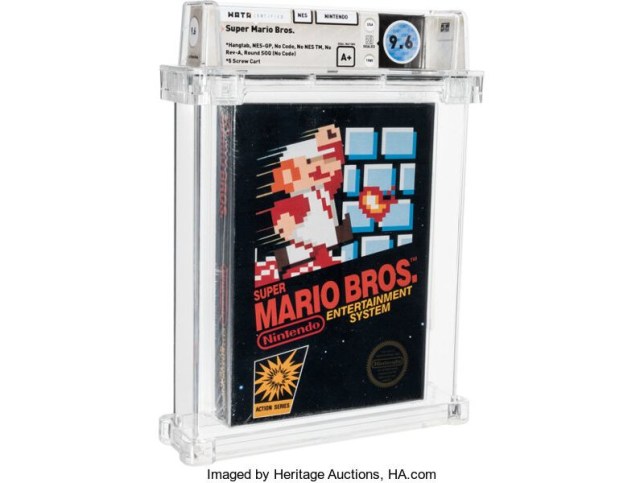 The record for the most ever paid for a video game has just been demolished by a copy of 1985 NES game Super Mario Bros.

There’s currently something of an ideological war going on between Sony and Microsoft, over backwards compatibility and game preservation – especially after Sony shut down the online stores for PlayStation 3, and PSP, and PS Vita and suddenly dozens of games became impossible to purchase anywhere.

That’s not the case for retro games, where everything is always available… for a price. But while you’d normally expect that the more common a game the cheaper it is that’s not necessarily always the case.

Super Mario Bros. sold over 50 million copies in its lifetime and yet a mint version has just sold for $660,000 (£476,939) simply because it was one of the first copies released in America in the mid-80s.

Organisers Heritage Auctions claim that the game is the oldest sealed copy of Super Mario Bros. they’ve ever sold, although it’s not a first edition and is in fact the fourth separate packaging variation for the game.

The auction list is surprisingly vague as to when this edition of the game was actually released but to the casual observer it looks exactly the same as any other, except it’s in mint condition and still wrapped in cellophane.

What’s really remarkable about the auction though is how much the game has gone for, given the previous record for a video game was $156,000 (£112,731) for a rare packaging variant of Super Mario Bros. 3.

That was only back in November and yet, as you can see, that’s almost pocket money compared to this newest auction.

The question now is how long the record for the most expensive video game will stand, especially if an even older copy goes up for auction…

Test EVERY person arriving in UK and ditch Covid exemption list to get holidays back, says bonking boff