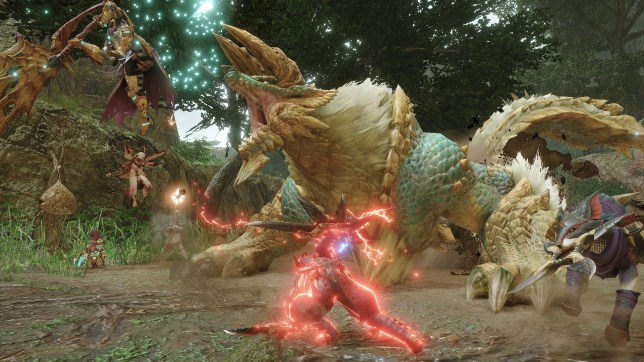 The Nintendo Switch gets an exclusive new Monster Hunter game that may just be the best co-op experience on the console.

If the rumours are true then Nintendo is currently sitting on a mountain of unannounced games, that will be released later in the year to coincide with the launch of the fabled Switch Pro. In the meantime though their release schedules are bare, with only more minor releases and remasters to keep things ticking over. Ordinarily, you wouldn’t expect Nintendo to be able to rely on third parties to pick up the slack but then Monster Hunter is not an ordinary game.

Although it only gained mainstream success in the West with 2018’s Monster Hunter: World, the franchise has been around since the PlayStation 2 era and is a full-blown cultural phenomenon in Japan. It almost single-handedly made the PSP a success in its home territory and its absence on the PS Vita is a major reason why Sony’s second portable console failed.

It wasn’t available on the PS Vita because Nintendo signed it up as a portable exclusive on 3DS, something they never usually do and another sign of how important the franchise is considered to be. What deals they’ve made to ensure Rise is a Switch exclusive (on consoles, there is a PC version due next year) they’ll probably never reveal but this is not only a full-bodied entry in the franchise it’s arguably the best it’s ever been.

The secret to Monster Hunter: World’s success in the West wasn’t really much of a secret. Much of the franchise’s appeal in Japan was due to the social element involved in meeting up physically to play on PSP. That didn’t translate to the West but having robust online options did and so Monster Hunter finally became a worldwide hit.

The obvious reason for making Rise a Switch exclusive is that World wouldn’t run properly on Nintendo’s less powerful console, but as anyone who’s played the demo will already know Rise is one of the best-looking games on the Switch. Certainly, there are compromises in getting it to running at a consistent pace with four people online, but the monsters and human characters look fantastic and the landscapes, while lacking detail close up, are impressively varied and highly interactive.

Although Monster Hunter has a long learning curve the basics are very simple. Although there is always some underlying storyline, it’s really just a means to build up the tension around the larger boss-like monsters at the end of game. Generally speaking though Monster Hunter is a game of side quests, where you play as a simple hunter in a medieval village (in this case one that is more obviously Japanese than usual – although thankfully the Californian dudebro dialogue from the demo has been curtailed in the full game).

It’s your job to go out hunting monsters, presumably for their meat but in terms of game rewards you’re after resources such as skin and bones that can be used to craft ever more powerful weapons and armour. It’s a simple loop – fight monsters to get the equipment needed to fight even bigger monsters – but it’s one which you have a huge degree of freedom in how you approach.

There are 14 different types of weapons (the same 14 from World) that range from a fairly simple sword up to complex ranged devices and Bloodborne style transforming gadgets. New players often find them clumsy to use at first, especially as there’s no lock-on for the camera, but that’s entirely purposeful. Monster Hunter’s combat revolves around learning a monster’s tells and making sure every attack you make is a purposeful one, which it needs to be given the long wind-up for most moves.

Although there is an easy-to-use dodge and roll this is miles away from the fast action of Devil May Cry and closer to Dark Souls in terms of relying on careful tactics and planned attacks. Monster Hunter is not nearly as hard as Dark Souls and its ilk though and if anything the main complaint that series regulars will have is that some of the returning monsters require only a more simplified approach to defeat.

Compared to previous games in the series Rise has a more arcade style approach, with what amounts to power-ups scattered across each of the maps and some easy to learn combos for each weapon. There’s also the key new feature of wirebugs, which can be used as a grappling hook to get around but also to clamber aboard monsters. The idea of mounting creatures is greatly expanded on from World, in that you can ride some of the smaller creatures around for a short time and use their own unique attacks – or simply get them to slam into a wall and injure themselves.

The wirebugs also enable a different set of special moves for each weapon type, that can be used to slow down or ensnare monsters, either for mounting or in conjunction with traps and non-lethal weapons to capture the creature alive (but don’t let that fool you as this is not a game for those squeamish about harming animals, even if there’s never any gore).

Even when just sticking to one weapon the variety of options at your disposal are immense, with the game leaving it entirely up to you how you approach a hunt. That includes making use of the canyne hunting partners, which can also be customised with their own weapons and armour.

The cat-like palicos are mainstays of the series and particularly useful in helping to cure status aliments and restoring your health. The dog-like palamutes are more suited to combat but can also be rode like a little pony, which is helpful for getting around as you can still collect and use objects as you go.

With so many options it’s easy to feel lost at times, even as the game tries its best with detailed pop-up tutorial help on every subject. That’s not nearly as intrusive as it sounds and if anything we would’ve liked to see context-sensitive help keep reappearing, as it’s very easy to forget how whole swathes of the game’s interconnected systems and complex interface work.

However, that’s an unavoidable problem with a game this involved and certainly this is more accessible than any of the pre-World games. The best way to learn though is in a team, with the game offering both local and online co-op options. On a technical level the latter seems to work fine pre-launch but the problem comes with the importance of communication. It’s easy to join a hunt in progress with a random player but you could easily play and complete the mission without even seeing them, let along co-operating with them in any meaningful manner.

As Switch users have learned to expect by now, if you want to talk while you play you’ll have to use Discord or some other alternative on your own, which is a needless obstacle for what is the best way to play the game. 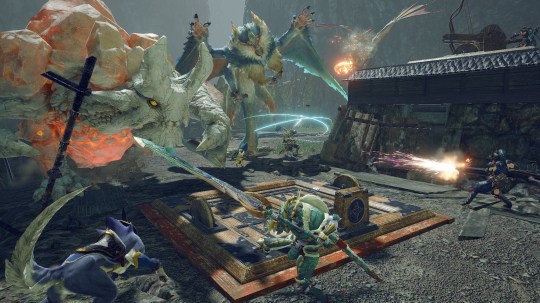 Most people probably expected Rise to be just a slimed down version of World but it’s really not. It takes everything that’s great about that game and mixes it with existing elements from the older titles and an impressive number of new features, which includes the new Rampage quests.

These are a key plot element and involve monsters being riled up to attack the village en masse, forcing you to take a defensive stand in what is a mix of survival mode with a Tower Defence style strategy element. Different defences, some automated and some of which you have to control yourself, can be set up before a wave of monsters appear… at which point your carefully laid plans devolve into frenzied melee action.

As an additional style of quest it’s a welcome change of pace and indicative of the fact that this is not just a pared down Monster Hunter: World but a full sequel all of its own, with its own unique features and tempo. Everything about the game feels expansive and carefully detailed, including the excellent level design that hides innumerable secrets in terms of resources, collectables, and unexpected vantage points for a monster ambush. Each is a proper open world too and not split up into separate sections like the older games.

From snowy wastes to a sunken forest, the variety of biomes is highly impressive, with each filled with both new and returning creatures. Monster Hunter Rise feels like the best of all possible worlds when it comes to the series at large, allowing for the portability of the PSP version, incorporating the more modern elements of World, and adding plenty of new features of its own.

Monster Hunter Rise is not only one of the best third party games on the Switch but one of the best games of any kind, and has every chance of becoming this year’s Animal Crossing in terms of being the perfect social experience for friends near and far.

In Short: A fantastic tour de force for the Switch and arguably the best Monster Hunter game ever, with a huge range of features and monsters, both new and old, and great co-op gameplay.

Pros: Fantastically complex game worlds that allow great freedom in how you approach them. Huge range of options and new features like the wirebug, palamutes, and rampages are very welcome.

Cons: A necessarily long learning curve for everything but the very basics; more context-sensitive help would’ve been useful. Voice chat has to be organised outside of the game. Older monsters are a little oversimplified.