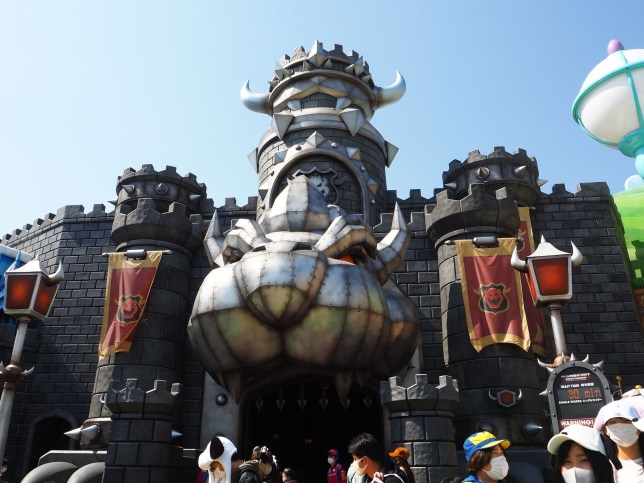 GameCentral visits the Super Nintendo World theme park in Japan and reviews the biggest ride there: a real-life version of Mario Kart.

On March 18, 2021 Super Nintendo World officially opened its warp tunnel to the general public. The new attraction, sitting alongside Hogwarts, Jurassic Park, and (for some reason) Waterworld in Universal Studios Japan is an exacting recreation of the Mushroom Kingdom, full of witty, whimsical, and wonderful nods to Mario games old and new.

The centrepiece of the attraction happens to also be the only area of Super Nintendo World that isn’t swimming in colour: Bowser’s Castle. Within the walls of the archvillain’s abode lies Super Nintendo World’s biggest ride, Mario Kart: Koopa’s Challenge.

Mario Kart: Koopa’s Challenge is an ambitious, augmented reality experience that aims to manifest the frenetic action of a Mario Kart race in a controlled way, giving the riders the thrill of throwing koopa shells and perfectly grinding sharp corners in the physical world. But before you can even get onto the ride, the first thing you have to do is make your way through Bowser’s imperious castle.

What strikes you as soon as you approach the castle is just how enormous it is. The cast iron Bowser head entrance and industrious brickwork towers over most of Super Nintendo World’s modest square footage. As soon as you’re through the gates, cobalt grey walls are decorated with luscious reds and opulent golds. Gone are the bold, sugary sweet colour palettes of Mario and friends. We’ve entered Bowser’s house. And Bowser is boujie. 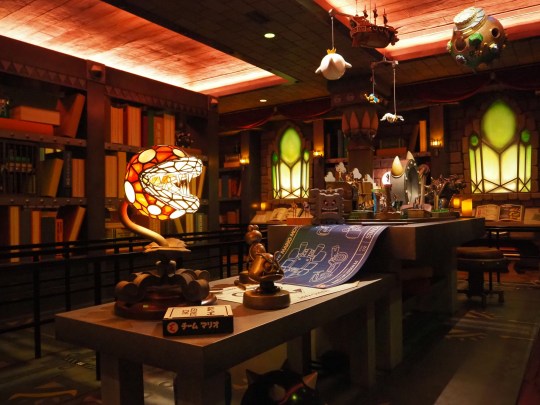 As you pass the giant Bowser portraits and drift along the tapestry-filled corridors, heading towards the ride, every nook and cranny is adorned with Mario Kart Easter eggs. These range from the obvious showpieces, such as the gorgeously re-created Mario Kart trophies, displayed and backlit in all their glory, through to smaller details that could be easily missed, such as a book titled, Surviving Rainbow Road.

Every detail helps build out the lore and fantasy of Bowser’s Castle, which is a genius way of making the queue time fly by. At peak hours of the day the wait can easily push to around 60 minutes. Considering the fact that COVID protocols are limiting entrance numbers to around 10,000 people a day you can expect those wait times to double when tourists are allowed back into Japan and the world finds its new normal. Thankfully, you will be too engrossed in the castle’s finer details to get bored of waiting.

As you progress through the castle, these details become even more ambitious. Paintings that were once static start moving depending on your perspective. Even further in, paintings spring to life, such as an adorably shy Boo within the castle’s library. 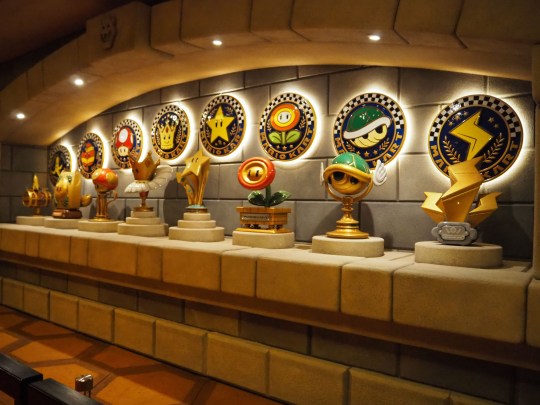 Eventually, once you have passed through the labyrinth of corridors and rooms, you make it through to the starting area of the ride and are handed your first peripheral: a Mario visor. This device is a simple enough head piece, designed to house the AR goggles you are presented with just before the ride commences. It is by no means the most comfortable thing to wear but it is micro-adjustable and not too heavy, so it can perch on your crown without too much bother.

The decor within the castle starts to noticeably shift throughout this section. Gone are the heavily decorated crystal lamps and statues, instead we start to get a glimpse of what a Mario Kart race would look like if it were run more like a Formula 1 event. Screens relay race feedback, consisting of multiple feeds of different tracks all pulled from Mario Kart 8 Deluxe. Once again, the attention to detail builds out the fantasy of the ride, making it much more than just a quick thrill.

Finally, it is time for the ride. The aim is simple: you are part of Team Mario, racing against the villainous Koopa clan. When an arrow flashes up on your AR visor you need to turn your steering wheel in that direction. When you physically turn your head, a series of friendlies and enemies will appear in front of you. 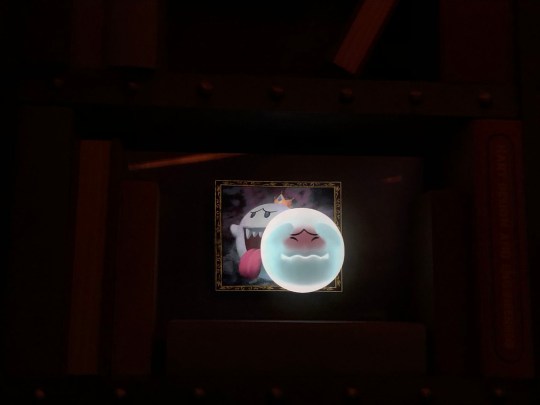 Mario Kart: Koopa’s Challenge – Boos don’t like it when you look at them (photo: Bianca Weber)

On your steering wheel you have two buttons which act like triggers for the series of koopa shells you will collect throughout the race. The more enemies you hit, using your vision to aim, the more gold coins you earn. At the end of the experience all your gold coins and digital stickers are transferred to your overall high score via the optional (but not really optional) Power-Up Bands that can be purchased both within and outside of Super Nintendo World.

There is a charm in making the ride so interactive – the thrill of being involved in the moment-to-moment action of the race is very real. But once you have passed the instructional videos and you are about to board your kart the first sticking point arises: you are sharing a kart with three other people. 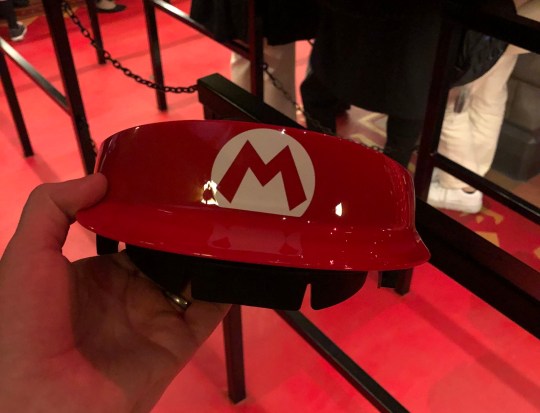 Mario Kart: Koopa’s Challenge – of course the VR helmet would look like this (photo: Bianca Weber)

Logistically, it makes perfect sense to have four to a kart. The total time racing is around the five-minute mark so if there were less people going around at one time the queuing time would be astronomical. The problem is that you are wrestling control of the kart with other people. If the kart was a two-seater this wouldn’t be too much of a hassle, but with four people it can get really messy. You might be turning your wheel with pinpoint accuracy but if the person next to you isn’t the kart will slow down, making for a juddery ride.

Alongside this, each rider has a colour-coded koopa shell to make keeping track of where you’re firing easier. The problem, again, is that your AR display is simulcast to everyone on the same kart. So at any one time there are four fast moving koopa shells pinging around your vision. Tracking your shells, everyone else’s shells whilst moving your head to aim, and then steering with the wheel when prompted is kind of like spinning plates on your head whilst doing the can-can: a bit tricky.

The ride takes you through multiple different Mario Kart level designs, from the standard track through to deserts and underwater levels. Most of the time, however, the franticness of keeping track of everything means that any cleverly designed physical sets sitting behind the AR screen are soon ignored. Even the music, a staple of Mario Kart and typically a beautiful cacophony of big band silliness, drifts into obscurity whilst focusing on what’s ahead of you. For four out of the five minutes of the ride, it’s mostly just highly stressful. That’s until you hit Rainbow Road. 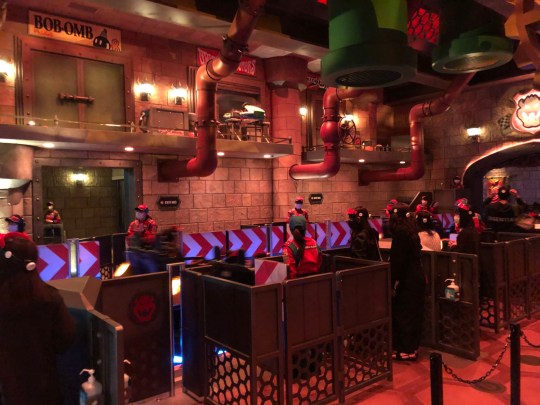 Mario Kart: Koopa’s Challenge – the wait will be even worse after COVID (photo: Bianca Weber)

After toiling through confusing, nondescript levels, Rainbow Road’s audacious soundtrack and glittery aesthetic hits you like a spade. It’s brash, bold, and captures the pure essence of fear and thrill one always feels when attempting to not fall off this infamous track. This is the moment Mario Kart: Koopa’s Challenge makes sense. Every element, from the AR enemies through to the kinetic feeling of turning and shooting feels its most streamlined and exciting. It’s wonderful, it’s just such a shame it’s only for the final few moments of the ride.

Once all is said and done, and your score has been calculated (I got 129 gold coins which I was chuffed with until I saw the all-time high-score of 445 pop-up soon after) you leave Bowser’s Castle via one of Super Nintendo World’s two gift shops: Mario Motors. 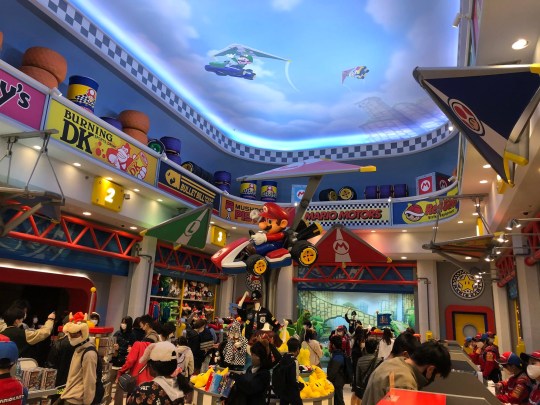 Mario Motors is chock-full of Mario Kart themed plushies, sweets, and a racing jacket that was almost too irresistible to not buy (the ¥14,000/£92 asking price soon put a stop to that). There is something for anyone looking to pick up a memento of their experience in Bowser’s Castle and beyond.

All in all, Mario Kart: Koopa’s Challenge is a fun ride that doesn’t quite live up to its lofty ambitions, which feels like a disappointment when compared to how staggering its enclosure within Bowser’s Castle and the rest of the attraction is.

If it were the case that Mario Kart: Koopa’s Challenge was the only ride in the nearby vicinity, then it would be a romp. However, Super Nintendo World lives within Universal Studios Japan, where there are much better thrills (Jurassic Park’s Flying Dinosaur) and audio-visual experiences (the Japan exclusive Space Fantasy: The Ride) that do the job better.

When the time comes that we can all travel again, and you’re lucky enough to find yourself with tickets to Super Nintendo World, try to get on Mario Kart: Koopa’s Challenge early to beat the crowds. But if you’re slightly disappointed, the rest of what Super Nintendo World has to offer will leave you grinning from ear to ear. 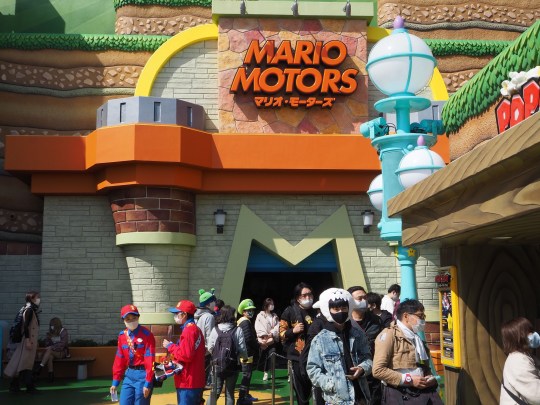 When will pubs reopen? Most won’t open on April 12, bosses warn