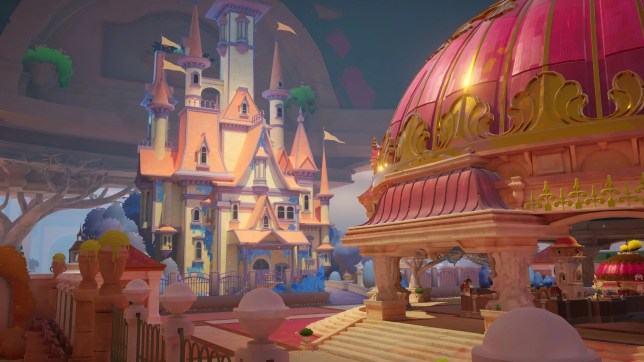 The latest indie release from Annapurna Interactive is a mix of love story and first person puzzler, with voiceovers from Bryce Dallas Howard.

Ever since Portal’s release in 2007, there’s been a steady stream of first person puzzle games, where previously the concept was almost unknown. From classics like The Witness and The Talos Principle, to The Turing Test and dozens of lesser known indie titles, it’s become a popular way of delivering brain teasers alongside atmosphere and plot.

Maquette joins this long line of immersive puzzlers, with its touching love story told via a series of puzzles that play with the idea of scale and perspective. Each scene in Maquette is told in a recursive space where the room you’re in is echoed by larger ones in successive scales up, and smaller ones built in miniature in what look like perfectly made dioramas of the room you’re in. A concept reminiscent of 2019’s A Fisherman’s Tale but without the VR.

The twist is that any change you make on any scale is reflected all the way through the chain from tiny to gargantuan. Pick up a key and drop it into a tiny model, and you’ll see the enormous key clanging to the ground in your character’s reality, exactly where you dropped it in the model. It’s initially a lot to take in, and early puzzles require a degree of trans-scale thinking that is anything but natural.

The game’s meet-cute opening has two artists begin their relationship over a spilled drink in a San Francisco coffee shop. You never see their faces, just hear their conversations while watching the contents of their mutually drawn sketchbook appear in real-time, scrawled across the scenery. Played by Bryce Dallas Howard and Fringe’s Seth Gabel, the voice acting is excellent, helping prevent the protagonists’ scripted quirkiness from becoming toe curling.

Wandering through Maquette’s serene, pastel-hewn world, studded with Disney-style palaces and colourful gazebos, you come across a model of the very gardens you’re in, where you discover how its systems work and that changes you make are mirrored at every scale. Like the drawings from the sketchbook, the story’s text appears written on buildings and walls, helping guide you to the next puzzle.

As well as echoing changes to your environment, you can also use changes in scale to re-size objects. Drop a regular-sized item out of a window into the larger scale world, and when you retrieve it in your own environment it will appear to have shrunk. The same works in reverse, scaling things up to make them useful in completely different scenarios – keys becoming bridges or ramps, letting you access otherwise unreachable areas.

The same technique works for your character. Find a way to climb into the next scale up and you can suddenly fit through mouse-sized holes in walls, discovering places that are only accessible in miniature. It’s a process that creates hugely satisfying moments of epiphany, where you suddenly figure out how to escape the confines of the scale you were trapped in, unlocking a new tranche of puzzles and plot. 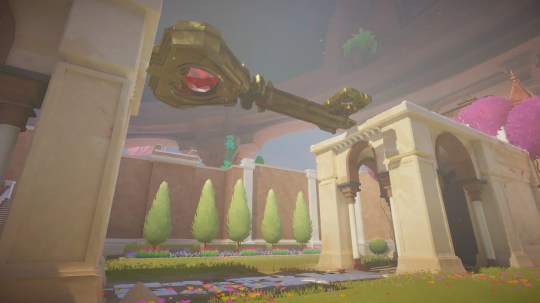 Maquette – the key to the solution (pic: Annapurna Interactive)

The concept is not without its problems though. One of those is knowing what you’re supposed to be doing at any given moment. The text of the story helps with that, showing you the area in which you should be looking, as do the translucent barriers that fence off parts of the level you definitely don’t need to be working with, but it’s still easy to spend long periods aimlessly wandering in search of the small clue or item you missed.

That’s a problem exacerbated by the exponential increases in distance. There’s no run button, and that’s fine when you’re in your native scale, but the next level up makes a short jaunt into a mind-numbingly tedious multi-minute stroll. Those regularly end with the realisation that you’re barking up the wrong tree entirely, forcing you to retrace your steps at the same soporific pace.

The plot neatly mirrors the puzzles, with the lovers’ quirks gradually starting to become major annoyances, in the same way that small objects turn into massive ones depending on where you put them. It’s a nice feature and gives the game a sense of momentum and purpose that it might lack with the puzzles alone. It’s certainly every inch an Annapurna release, with the kind of rich emotional range many games ignore in favour of violence.

However, you can’t help feeling as though the structure of the levels isn’t quite fully explored. Unlike Portal’s increasingly mind-bending use of the portal gun, Maquette’s recursion is used often but never in ways that surpass the revelations made in the opening hour of the game. Its relatively short runtime may be extended by those protracted moments of wandering, but equally the intellectual supercharging that might have brought this into the same territory as The Witness just isn’t there.

Maquette is a love story with some interesting and occasionally obtuse puzzles to lend it shape and structure. Expecting it to be a hardcore puzzle game isn’t fair, and the high quality of both its voice acting and art design never falter, but you can’t help but wonder what might have been if the game had pushed itself just slightly harder in the direction of brain teasing. Still, as developer Graceful Decay’s debut it remains a positive and hugely promising start.

In Short: A love story told through a first person puzzle game that delights in playing with scale and recursive environments, even if its conundrums eventually feel a little undercooked.

Cons: Many moments feel directionless and walking around the huge-scale areas can be a chore. Central gameplay mechanics don’t feel fully exploited.