Can we have a Thunderjaw next, please? (pic: Lego)

An official Lego set based on the Tallneck robot from Hoirzon Zero Dawn and Forbidden West also has an Aloy minifigure.

Presumably there must be some people in the world that don’t like Lego, but for 99.9% of the population the idea of turning your favourite obsession into a brick-based model always seems like fun no matter your age.

There are Lego sets to make everything from a flower bouquet to the Taj Mahal, as well as an increasing number based on video games. There have been several sets for Overwatch, a recent one for Sonic The Hedgehog, and a whole line for Super Mario and Nintendo that has already been extremely successful.

And now there is an official set based on Horizon Forbidden West, with a 34cm high version of the Tallneck robot that’s made up of 1,222 pieces. 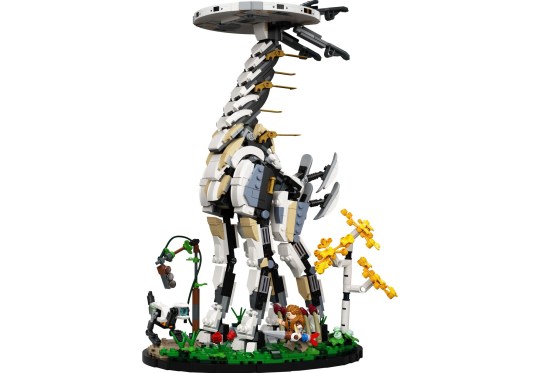 This is the first time Lego has ever partnered with PlayStation and the model was no doubt inspired by the many fan-made ones that have existed ever since Horizon Zero Dawn was released in 2017.

Whatever else you think of the Horizon series, the design of the animal-shaped robots is fantastic and this set includes not just the giraffe-like Longneck but also a little Watcher robot, which resembles a small bipedal dinosaur.

There’s also a minifigure of protagonist Aloy, complete with a unique hairpiece for her very distinctive hairdo from the new game.

Although Horizon Forbidden West is out this Friday the Lego set won’t be released until May 2022, when it will cost £69.99.

Whether there’ll be any more sets after that has not been announced, but there were recent rumours of an Uncharted set.

You would have assumed that would be announced to coincide with the movie though and in fact one Lego fan claims to have made up the entire rumour.

Now that Lego has Sony’s number though more sets do seem inevitable, but it’ll also be interesting to see if they ever try to do something with Hideo Kojima – who makes no secret of being a Lego fan.