Peachy finally gets her own minifigure (pic: Lego)

MMAR10 Day has seen the announcement of a number of new Lego Super Mario sets, including a Princess Peach starter course and minifigure.

Nintendo and Lego have been collaborating on Super Mario themed sets for years now, in what has been one of the most successful new lines of recent years for Lego. They’ve made toys of even very obscure characters, and recently expanded out into the Luigi’s Mansion series, but the one person they haven’t featured, until now, is Princess Peach.

Six other new sets have also been announced today though, including a massive new Peach’s Castle set, a new Yoshi set, a homage to Super Mario 3D World, and a marvellous looking Shoe Goomba.

Rather than just being normal Lego sets, with ordinary minifgures, the idea of the Super Mario series is that you build your own custom Mario courses and then use special Bluetooth minifigures to see how many coins you can collect within two minutes.

There’s already Mario and Luigi minifigures and the one of Peachy works in the same way, with a sensor at her feet that allows the figure to detect both colours – so it knows if she’s walking on lava or poison – and special Lego bricks with QR codes on them.

The QR codes trigger special animations on the figure’s chest and relevant music, sound effects, and quotes. So if you jump on a ? block it’ll know or if you come across a friend or enemy the minifigure will start talking to them. The three different Bluetooth figures will even talk amongst themselves. 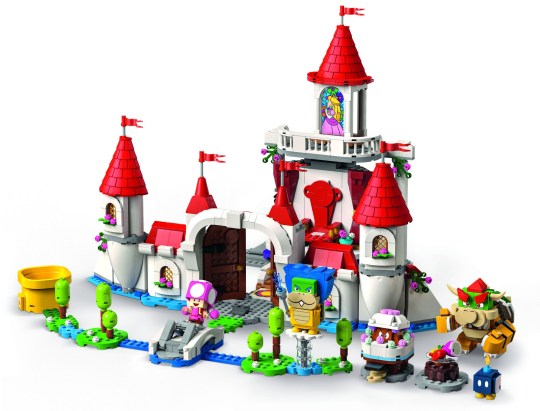 Peach’s Castle Expansion Set – only the second set to include Bowser (pic: Lego)

The previous expansion sets, like Bowser’s Airship and the Lego equivalent of Super Mario Maker, have all been great and the six new ones look equally good. They are:

71403 Adventures with Peach Starter Course
Not yet on the Lego shop site but the other starter courses are both £54.99.

71405 Fuzzy Flippers Expansion Set
Also not on the site yet, but it’s a smaller set with two Fuzzy enemies on seesaws.

71406 Yoshi’s Gift House Expansion Set – £24.99
Only the second appearance of a green Yoshi and also comes with a Monty Mole. 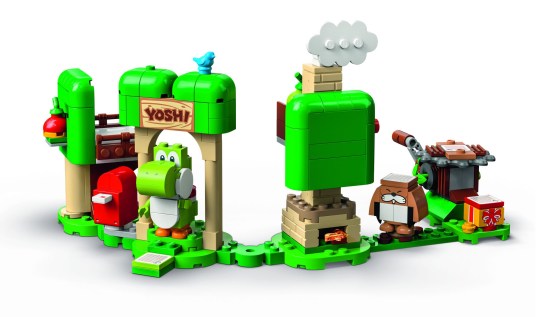 71408 Peach’s Castle Expansion Set – £114.99
Including figures for Bowser, Toadette, Ludwig von Koopa, and a Goomba and Bob-omb – but not the Princess Peach minifigure.

Although the new sets aren’t out until August 1 there is a special MAR10 page on the Lego website highlighting all the sets, with a free Fuzzy & Mushrom Platform Expansion Set and Super Mushroom Surprise Expansion Set if you spend a ‘certain amount’ on a Super Mario set today. 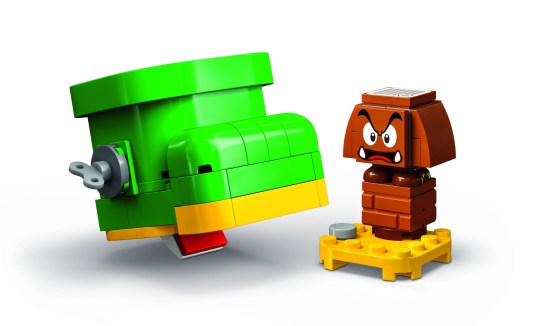 Goomba’s Shoe Expansion Set – we’re totally getting this one at least (pic: Lego)

You can also get an exclusive Lego Super Mario play coin if you take your Bluetooth minifigure to a Lego store that has a Super Mario cut-out that can detect it. Alternatively, you can just take your photo with the cut-out and get one anyway.

There’s also a number of bundles on the official Lego MAR10 site, including a £99.98 one with the Mario and Luigi minifigures and their starter courses that gifts you 1,000 bonus VIP Lego Points (worth over £50 of in-store credit) and 50 My Nintendo Platinum Points.

In a similar manner you can get all three Luigi’s Mansion sets plus the Luigi minifigure starter course for £181.96 plus 1,500 bonus VIP points and 50 My Nintendo Platinum Points.

Finally, there’s the Beach Blast Bundle that includes the Mario starter course and two of the new beach-themed expansion sets for £134.97, with 1,200 bonus VIP points and 50 My Nintendo Platinum Points

Finally, there’s a sweepstake to win Super Mario sets, including the ? Block, if you’re feeling lucky rather than rich today. 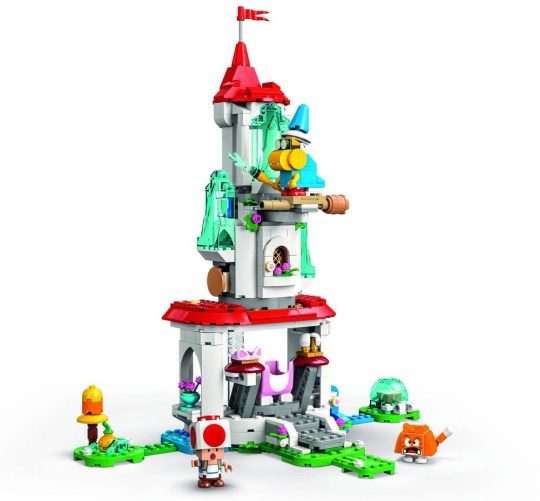 Cat Peach Suit and Frozen Tower Expansion Set – the suit fits onto any of the minifigures (pic: Lego)