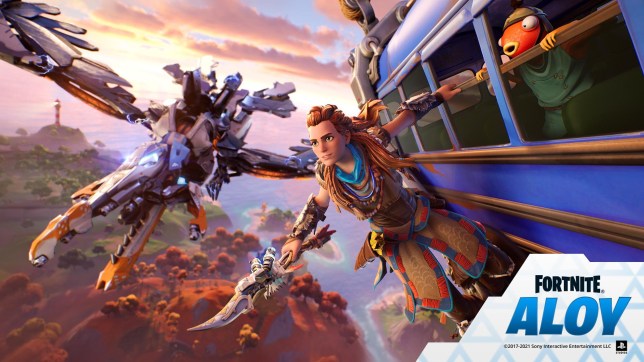 Not only is Fortnite playing host to another PlayStation video game star but Epic Games has just secured themselves $1 billion in new funding.

If you’d told someone a few years ago that one single video game would feature Alien, Predator, Terminator, Tron, Star Wars, Marvel, DC, and PlayStation and Xbox exclusive characters they would’ve thought you mad.

But every company in the world wants to be a part of Fortnite and the latest addition is Aloy from Horizon Zero Dawn and the upcoming Horizon Forbidden West – in fact, her inclusion in Fortnite could well be another hint that the sequel is coming out this year.

As far as Fortnite is concerned though it’s an excuse to pair her up with Lara Croft, who is already in the game, in a limited time co-op mode where only bows and dual pistols will be allowed.

Aloy is the second first party PlayStation character to be added to the game, after Kratos turned up in December of last year.

At the time it was speculated that Epic Games might be trying to go for the triple by having a Nintendo character included as well, perhaps Samus Aran from Metroid, but that never happened.

Apparently, all the money in the world couldn’t convince Nintendo to lend their character out – and that’s no exaggeration of Epic’s bank balance given their latest rounding of funding, which has raised a staggering $1 billion (£728m) for the company.

That means Epic Games is now worth an unholy $28.7 billion (£20.9bn), not only thanks to Fortnite but also their Unreal Engine licensing business.

Not so much the Epic Games Store though, as recent information from their spat with Apple reveals that all those paid-for exclusive have put the whole store in the red – although clearly Epic can afford it.

Interestingly, $200 million of the new funding came from Sony, the only company Epic mentioned by name during the funding announcement.

‘This round includes an additional $200m strategic investment from Sony Group Corporation, which builds on the already close relationship between the two companies and reinforces their shared mission to advance the state of the art in technology, entertainment, and socially-connected online services’, reads the statement.

What that might mean in the future is unclear, except that Aloy probably won’t be the last PlayStation exclusive character appearing in Fortnite.