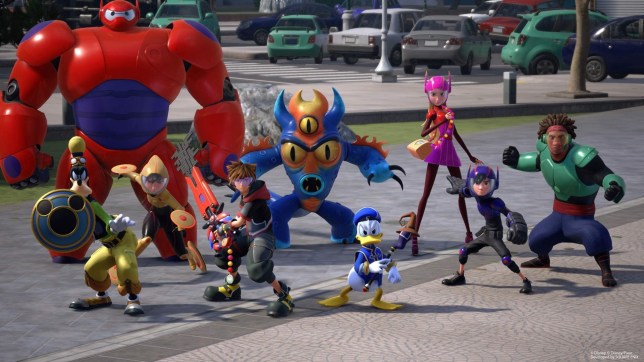 This is only a small handful of the amount of characters you’ll meet throughout the series (Pic: Square Enix/Disney)

The Final Fantasy/Disney crossover series is now available on the Epic Games Store and, to celebrate, the games’ prices have been reduced.

The Kingdom Hearts series has finally made its long-awaited debut on PC via the Epic Games Store. It’s an opportunity for newcomers to jump into the series and see what all the fuss is about and for long-time fans to relive these crazy adventures.

And to mark the occasion, the entire collection is already being sold at a discount of 20%. The offer won’t last long, as they’ll go back up to full price next week on April 6, so anyone interested in investing in the series best do it now.

Thankfully, if you had already pre-purchased any of these games at their original price, you are eligible for a partial refund, which should be applied automatically.

For simplicity’s sake, here is now each game is priced:

For those who pre-purchased on the Epic Games Store, you will be eligible for a partial refund back to your original payment method.

While the discount is obviously welcome, buying the entire series will still set you back £151.96 exactly. At full price, they would cost £189.96, meaning you save yourself £38.

By comparison, the Kingdom Hearts All-In-One package on the PlayStation Store, which includes everything except for Melody Of Memory, is £89.99, which is certainly a far more enticing option for those unconcerned with playing the series on PC.

Another extra detail that’s easy to miss is that anyone who buys Kingdom Hearts 3 + Re Mind will also receive a three-month Disney+ subscription. This offer is even lasting longer and will be available until May 31st. You can check the full details on this FAQ page.

As for the future of the series, its 20th anniversary is taking place next year, so there are naturally expectations for a new game to coincide with it, something director Tetsuya Nomura has already suggested will happen.

Kingdom Hearts 3 marked the end of the Dark Seeker storyline which began with the very first game, but it also set seeds for the next saga, with Square Enix even referring to it as Phase 2 in a manner similar to the Marvel Cinematic Universe.