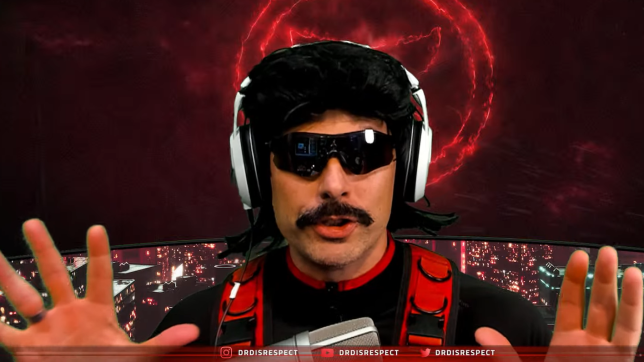 He finally got to try Warzone 2 (pic: Twitch)

Dr Disrespect bashing Call Of Duty is hardly news anymore, but this time he actually played the game, unlike when he criticised Warzone 2’s DMZ mode – which has since been dubbed a beta.

He’s not the only one to express his concerns with the sequel, as Twitch streamer Shroud was also left unimpressed with the game.

When he finally got to play Warzone 2 on launch day, like everyone else, the Doc kept running into issues until he couldn’t hold in his anger any longer.

During his stream, he mentioned multiple times that Warzone 2’s looting system was ‘atrocious,’ with the final straw being him getting lost in a dead player’s inventory.

‘I don’t know what the f*** I’m looking at… This looting experience, it’s something else. It’s atrocious. I mean, it’s awful,’ Dr Disrespect said.

Other comments suggested that his game, Deadrop, will have a very different looting experience from Warzone 2. There are no details about when the Doc’s game will be finally released but it’s assumed to be somewhere at the end of 2023.

Deadrop was also recently compared to 100 Thieve’s Project X, with Dr Disrespect quickly commenting on the situation on Twitter, in his usual sarcastic tone.

So far, it seems like Dr Disrespect has been enjoying Warzone 2 way more than Modern Warfare 2, which he rage-deleted after only playing for three days. Although you never know what he might do next, or what will set him off, the more he plays the new Call Of Duty titles.

Lately, he’s also been playing Overwatch 2 and even though he seems to be having fun so far, the game hasn’t completely avoided his criticisms, particularly after the Doc was placed in the Bronze tier rank.

However, he claims that his criticisms usually come from a ‘place of love,’ since he used to be a video game level designer working at Activision.