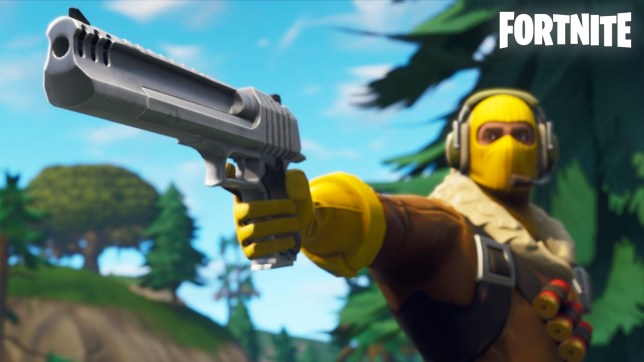 Fortnite – the hand cannon is back, for a bit (pic: Epic Games)

A surprise new update to Fortnite Season 5 has unvaulted the beloved hand cannon but removed the not quite so loved flint-knock pistol.

Fortnite Season 5 has been filled with unexpected character cameos, from Tron to Street Fighter, but perhaps the biggest surprise so far is that the hand cannon is back.

The slow but powerful pistol was originally vaulted at the start of Fortnite Chapter 2 but has made guest appearances since then, for just 24 hours, in December 2019 and January 2020.

It also turned up in the Spy Games limited time mode but now it’s back in the main game, although probably only for a week – seeing as it’s replaced the now vaulted flint-knock pistol which was itself only added a week ago.

The hand cannon uses heavy rounds and does 2.0x headshot damage but there’s no special way to get hold of it. Now that it’s in rotation it’ll just turn up randomly in a weapon stash and you’ll just have to get lucky to find it.

It’s not especially rare though, so play a couple of games and you’re sure to come across it. Just remember it’s very slow, so don’t go into a fight thinking you’re going to use it like a machinegun.

Epic Games are hinting that when the hand cannon is re-vaulted it’ll be replaced with another classic weapon that hasn’t been seen for a while, although there’s no clue as to what it’ll be yet.

This week’s update has also added a new limited time mode in the form of Comeback Squads, which unlike normal Battle Royale rules allow you to respawn multiple times.

Not only that but the more times you respawn the better the loot you’ll get, although you can’t come back an infinite number of times, which means there’s a nice risk vs. reward mechanic going on.

The hand cannon is in the game right now, while Comeback Squads will be available to play later in the week.

A new Hotfix is live!

ð«The Flint-Knock heads back to the vault, but something handy took its place this week.
ðNew LTM later this week: Comeback Squads. Every life your loot gets better, but you have limited respawns! pic.twitter.com/W7DJD1yInf