No longer faster than a speeding bullet (pic: Epic Games)

Marvel characters had a whole season of Fortnite dedicated to them but while that’s not happened with rivals DC there are already a lot of their characters in the game, with more to come as tie-ins to the new Suicide Squad film.

Batman is already part of Fortnite but the other two from DC’s trinity of big hitters have been missing up until now. Wonder Woman is still MIA but Superman is finally making his appearance this season, although in order to keep things playable he’s not invulnerable to bullets.

The Man of Steel is now available to unlock from the battle pass but, as you’d expect, there are a few hoops to jump through, literally in this case, before you can start using him and the Clark Kent outfit.

How to complete the Fortnite Superman quests

The Superman quests are pretty straightforward and simply involve talking to Clark Kent, Armored Batman or Beast Boy and doing their fetch quests for them.

Clark Kent is at the orchard north of Corny Complex, Batman is at Dirty Docks, and Beast Boy is at Weeping Woods. They’re not hiding, so finding them and completing their quests should be easy.

How to unlock Black/Shadow Superman suit

All of the above is pretty easy but the hardest quest is getting the Synder-esque Shadow Superman suit and its related extras.

It’s difficult in that you have to complete a lot of epic quests, but none of them are specific to Superman or DC, so if you’ve already done a bunch you should be more than halfway there by now. 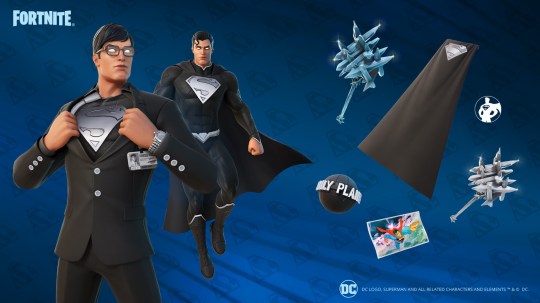