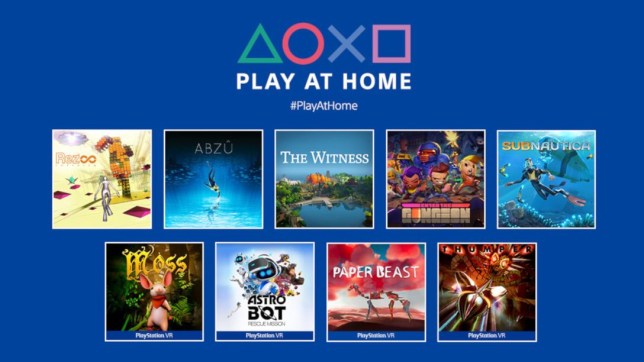 You should really try them all (pic: Sony)

Rez Infinite, Moss, Thumper, and Subnautica are amongst the free games being offered to all PlayStation owners this month and next.

This week has been full of announcements and rumours about Xbox Game Pass, with many worrying that the subscription service is one that Sony, literally, cannot afford to compete with.

But it’s almost certainly not a coincidence that Sony has just announced they’ll be giving Horizon Zero Dawn and nine indie games away free to everyone, no question asked.

The offer is part of Sony’s existing Play at Home initiative, which has previously included games such as Ratchet & Clank and Journey, but on much larger scale, with nine top notch indie games available from Thursday, March 25.

Horizon Zero Dawn Complete Edition is the headline grabber but given some of the other indie classics it’s by no means the best game on the list.

It’ll be available for download on April 19 and you’ll have until May 14 to grab you free copy, at which point the offer ends.

The indie games will be available until April 22 and include the following, all of which are well worth a look at – although the line-up does include a couple of PlayStation VR exclusives.

Subnautica
One of the most original and enjoyable survival games of the last gen, with a unique underwater world to explore that’s fascinating in the shallows and terrifying once you get deeper.

ABZÛ
The closest thing to a weak link in the line-up and even then it’s still a perfectly enjoyable, scuba diving game that’s heavily influenced by Journey.

Enter The Gungeon
One of the best top-down shooters of recent years, with elements of roguelikes and bullet hell that are well judged enough in terms of difficulty that anyone can enjoy the action.

The Witness
We weren’t the biggest fans of this first person puzzle game but we were in the minority on that, as you explore a Myst style island full of mysteries.

Thumper
The world’s only survival horror music game, with a stunning soundtrack that is both exhilarating and deeply unnerving – and even better in VR.

Rez Infinite
The definite version of one of our favourite games of all time, as the classic Dreamcast era on-rails shooter gets an optional VR mode and an extra level featuring greater freedom of movement.

Paper Beast
Sadly overlooked when it first came out, this purposefully strange mix of god game style concepts, by Another World creators Éric Chahi, has you influencing the lives of an ecosystem full of origami animals.

Astro Bot: Rescue Mission
Technically not an indie game at all, but instead one of the best VR games ever made and one of the only games to rival the best 3D Super Mario game.

Moss
One of the few VR games that’s almost as good as Astro Bot and an utterly charming third person action adventure whose only flaw is that it’s over too soon.