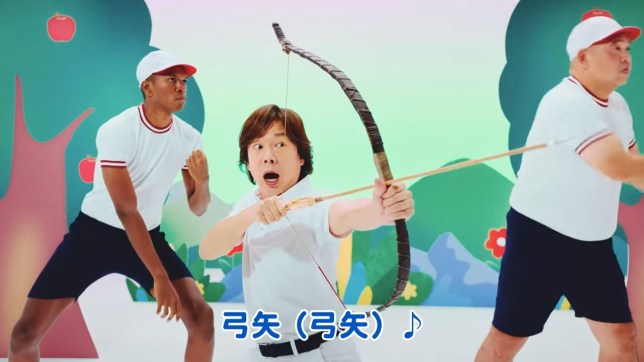 We have several questions but none of them will ever be answered (pic: YouTube)

Marketing has ramped up ahead of God Of War Ragnarök’s release, but the game’s newest ads are pretty bizarre.

We didn’t think anything could be more ill-fitting than that Japanese advert for Resident Evil Village that turned its squad of monstrous villains into cute, comedy puppets.

A new ad for the Japanese release of God Of War Ragnarök may have beaten it, however, in terms of completely failing to match the game’s tone.

While we’ve been denied the gloriousness of hand puppet Kratos, the ad instead has a trio of men sing a jaunty song alongside game footage of Kratos looking moody and committing acts of extreme violence.

The song and cartoonish set wouldn’t look out of place on a CBeebies show, with the singers wearing broad smiles all the way through.

If it didn’t include any footage, you’d only know it was for God Of War because the lead occasionally pulls out Kratos’ axe and Atreus’ bow.

It’s such a strange take considering ‘happy’ and ‘jolly’ are words you don’t usually associate with the God Of War series. Kratos may not be as murder happy nowadays as he was in the original games, but he’s still got a lot of emotional baggage, and no one is expecting God Of War Ragnarök to drastically shift the series’ tone.

We choose to believe that everyone involved with the ad’s creation is aware of the tonal dissonance, and that’s the joke. If not, well, it still makes more sense than the American ad.

It’s about a minute longer than the Japanese one, but it somehow features less gameplay footage and spends near enough the entirety of its runtime depicting a father-child support group with Ben Stiller cosplaying as Kratos. Although he apparently wasn’t committed to the bit enough to shave his head.

Conceptually, the joke makes sense as a big part of Santa Monica Studio’s God Of War duology is the relationship between Kratos and his son. We just don’t understand the choice to have Stiller, LeBron James, and John Travolta be the ones chosen to promote it beyond the fact that they’re parents (their actual kids being included is a nice touch though).

The whole thing feels like a rejected Saturday Night Live skit and it’s difficult to imagine this will do a better job at convincing people to pick the game up over any of the gameplay or story trailers.