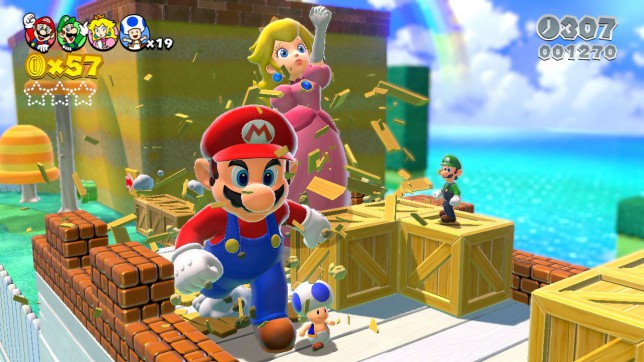 The Super Mario 3D World re-release has local and online multiplayer, which is perfect for the occasion (pic: Nintendo)

Recent studies show that half of parents see the benefits of gaming during lockdown, but few find it productive or a worthwhile hobby.

In case it wasn’t obvious already, more and more people have turned to gaming as a means of keeping occupied during lockdown. There’s plenty of evidence for it too, like how Steam’s concurrent users record keeps getting broken.

There are, however, concerns over the effect an overreliance on gaming could have, especially on young children. But new research commissioned by HyperX, the gaming division of Kingston Technology, suggests that gaming has actually been beneficial during this period.

Of the 1,000 parents (aged 28 or above) spoken to, over half of them believe that gaming has helped their children cope with lockdown, with exactly 50% saying that it has improved their children’s mental health.

‘Gaming is an important way for adolescents to socialise with their friends – and the importance of gaming’s social function has become even more significant during lockdown,’ says Dr Dieter Declercq, Lecturer in Film and Media Studies at the University of Kent.

‘Three out of five children prefer to play games with or against other people online, with far fewer opting to play on their own. When children think of gaming in 2021, most now think of it as something they do with other people, especially to interact with their peers, but also to make new connections.

‘This social function of gaming is of course very valuable during a time when there is less physical interaction possible. The pandemic has really highlighted the role of gaming in the social life of young people and the way they communicate with friends.’

Despite these benefits, the majority of parents appear to still view gaming as a waste of time. Compared to the 58% of children that say gaming is a productive use of time, only 33% of parents agree.

While this difference of opinion between parents and children is unsurprising, it’s strange to hear parents be so dismissive of the hobby when 86% of them admitted to playing games themselves.

That said, the overall outlook is still positive and shows a further growing acceptance of gaming.

‘It is encouraging that parents understand that gaming is more than just a hobby for their children,’ says HyperX’s UK regional manager Dayna Sinclair, ‘It is a way to connect, talk, make friends and compete while stuck at home. Gaming brings people together even when we are apart.’