The latest musical celebrities to be added to Fortnite are Bruno Mars and Anderson .Paak but you’ll have to fight to get their skins early.

Fortnite has played host to many famous musical acts over the years, from Travis Scott to Ariana Grande, but usually they’ve appeared via a dedicated concert. Silk Sonic though will see Bruno Mars and Anderson .Paak added as part of a new in-game radio station and as prizes in an upcoming tournament.

Icon Radio, as it’s called, is being used to showcase all of Fortnite’s musical guests and features Bootsy Collins as its DJ, with more acts being added as time goes on.

Music has become increasingly important to Fortnite over the years and last year Epic Games bought Rock Band developer Harmonix to work on the game, although the fruits of their labour have not yet been revealed.

How to unlock Bruno Mars and Anderson .Paak in Fortnite

The Silk Sonic Cup is a duos tournament that’s open to anyone, no matter their skill level.

You’ll be given three hours to complete 10 matches, with any team that finishes in the top 1,250 unlocking the complete Silk Sonic Set, including the skins.

An exclusive spray will also be given away to anyone that scores at least eight points, which is still braggable.

The exact start times haven’t been announced yet but you can read more on the official rules here. Or… you can just wait a few extra days and buy them from the Item Store. 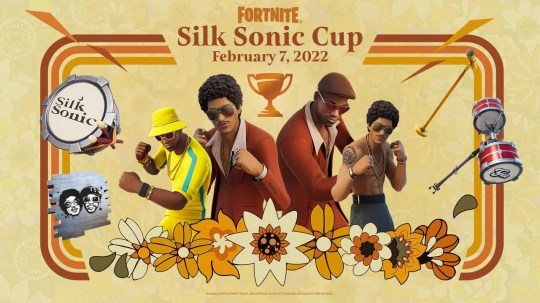