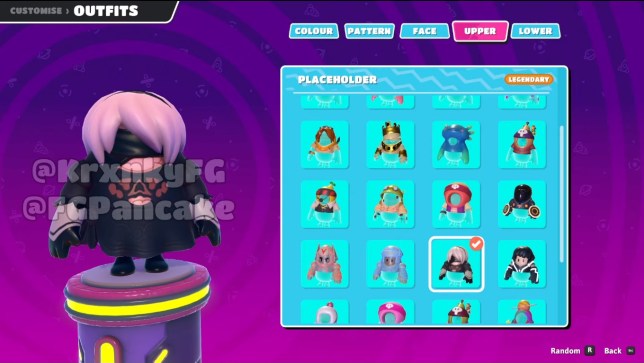 Season 4.5 of Fall Guys is going to have some Fortnite style cameos but they’re not an easy fit for the portly beans.

Although it’s hard to say exactly how successful anyone thought Fall Guys was going to be, it seems fair to imagine it was an even bigger hit than Sony and Mediatonic hoped for.

Its popularity led to, amongst other things, Epic Games buying Mediatonic and the game starting to add in special costumes based on other properties, from Godzilla to Sonic The Hedgehog.

The problem is that the beans aren’t really suited to a lot of the outfits and certainly 2B from NieR:Automata seems to have put on a lot of weight since her last game.

The leaked costumes you see here were datamined by fans KrxnkyFG and FgPancake and as well as 2B from NieR:Automata also include a number of Tron costumes, from both the original film and Tron Legacy.

Tron also turned up in Fortnite recently, despite there not having been a new film in years, which may give fans hope that Disney is still interested in the property.

Bomberman is also a bit out of leftfield but it’s always good to see Konami being reminded that it’s a video games company, and at least the costume looks a bit better on the beans.

Fall Guys also has an Among Us crossover coming up soon, so clearly you can expect plenty more crossover costumes in the future.

What you can also expect is the game appearing on formats other than the PlayStation and PC, although there’s still no release date for the other versions yet.