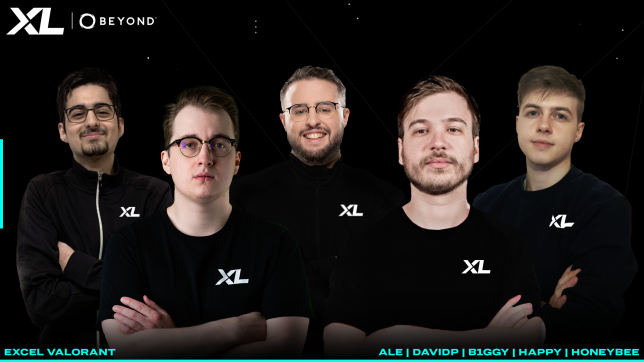 Excel Esports will compete in the Valorant Champions Tour 2021 (VCT) after revealing its ambitious roster.

Now the rest of the roster has been revealed as the British esports organisation set their eyes on qualifying for VCT Masters Stage 2 in Reykjavík, Iceland – Valorant’s first-ever live LAN event.

This is the third major esports title that the British organisation will compete in, adding to Excel’s young Fornite superstar Jaden “Wolfiez” Ashman and the League of Legends European Championship (LEC) team.

The five-man Valorant roster is mostly made up of former CS:GO talent as Davidp is joined by Morgan ‘B1GGY’ Madour, who coached and competed in the first-person shooter, and Vincent “Happy” Cervoni who won two CS:GO Majors while leading the very strong squads of Team EnVyUs and Team LDLC.

Completing the team is young British talent Marc ‘Honeybee’ Begley, who competed in CS:GO and a semi-professional level, and another exciting young talent in Alend “Ale” Khalaf who is renowned for his impressive mechanical skill.

As for in-game roles, Davidp will be the team’s in-game leader and smoker, Morgan “B1GGY” Madour will play support, Marc “Honeybee” Begley will be the sentinel, Alend “Ale” Khalaf will take on the duelist role, and Vincent “Happy” Cervoni will play flex.

Excel have established themselves as one of the biggest esports organisations in the UK with headquarters based in the 82,000 seater Twickenham Stadium in south-west London.

Now the organisation will be looking for in-game success as the Valorant team will debut in the Challengers event of VCT Phase Two which starts March 31.