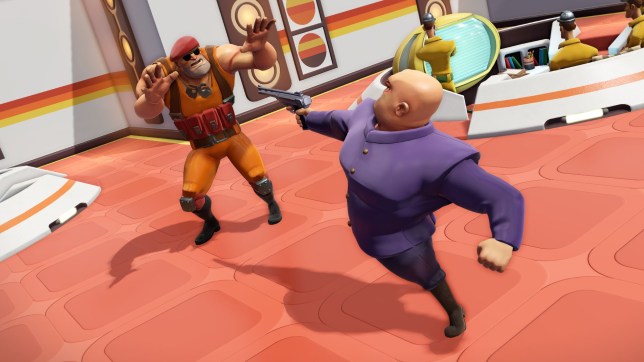 If you’ve ever fancied yourself as a Bond villain, Rebellion offers up the perfect simulation of playing the bad guy.

The original Evil Genius was made by a real-life genius – it was the last game created by Demis Hassabis’ Elixir Studios, before Hasssabis retrained as a neuroscientist and embarked on a path which would lead to him becoming Google’s artificial intelligence guru. Though a fine game, Evil Genius’ 2004 release coincided with publisher Vivendi Universal’s exit from the games industry, and a lack of marketing support left it short of sales success.

Recently, the ever-enterprising Rebellion picked up its intellectual property rights and, as a result, we can finally anticipate the arrival of Evil Genius 2: World Domination, due to be released on March 30. Like the original game, it’s PC only (controls-wise, it really needs a keyboard and mouse) and belongs to a long-lost genre of base-building simulators, as epitomised by Dungeon Keeper or, more recently, Two Point Hospital.

For this preview, we were able to play the first five hours of Evil Genius 2, most of which was effectively a tutorial. Indeed, Evil Genius 2’s tutorial may be one of the longest ones in the history of video games, and there’s a reason for that: it’s a complicated game. Those Bond villain lairs don’t build themselves, you know, plus they require a shocking amount of upkeep and a carefully assembled staffing complement.

In the full game, you will be able to choose between four evil geniuses, each with a separate storyline and different specialities, but the preview code only allowed us to play as Maximilian (familiar to those who played the original game), a narcissistic, monocled despot obsessed by global domination.

From the off it became clear that Rebellion hasn’t messed with the blueprint established by the original game – although, via Evil Genius 2’s extended tutorial, it has wisely opted to hold players’ hands much more assiduously. As such, its action takes place in two main areas: the base that you’re building and Global Operations, in which you can send out your minions to operate in different parts of the world, causing general evil mayhem, pulling off money-making heists, and kidnapping people with useful skills that can be imparted to your own minions and henchmen.

Initially, the vast majority of your time is taken up by base-building. This time around, you start off on a secluded tropical island, on which there is a tourist-friendly front operation designed to disguise the constant traffic of helicopters flying in and out. Behind that front (which you eventually turn into a casino resort), you can construct your lair by blasting into the island’s rock.

One innovation offered by Evil Genius 2 is the ability to build multi-storey bases, although that won’t kick in until after the period we were allowed to play through during the preview. That should come in handy though, since you must build an awful lot of rooms, each conferring some beneficial effect on your staff, general operations, or the ability to withstand the incursions of enemy agents.

For that reason, it’s quite likely that you will eventually want to scrap the first base you build in favour of something more carefully designed, once you get a handle how things work. There’s a limited amount of rock to blast out into rooms, and it pays to have key areas, such as your vault full of gold and your built-in power station, hidden well away from the prying eyes of enemies.

Power is a key commodity (as is radio broadcasting capacity, handled by the control room), so you must make both those rooms as big as possible. Luckily, it’s easy to extend rooms until you hit bedrock boundaries, and to rearrange the (sometimes large) objects you must place in those rooms.

Proceedings are relatively calm at first, as your base begins to take shape and before the forces of non-evil start to realise what you’re up to. Once you have power, a vault, a control room, accommodation, and a mess hall for your minions – along with a prison and some traps embedded in the walls (initially a classic boxing glove on a spring, although Rebellion has gone to town with a roster of ever more elaborate traps) – you start to get an inkling of what Evil Genius 2’s gameplay will be like once your base is more or less finished. 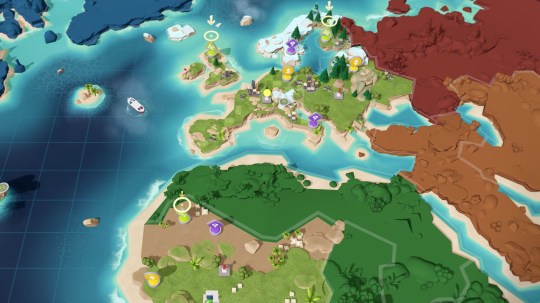 Evil Genius 2 – the world is yours (pic: Rebellion)

At this point it’s time to switch to the Global Operations screen, where you can pick a territory on its archetypal Bond villain map of the world and send some minions out in preparation for setting up a local offshoot of your evil organisation. There, you can choose between various dastardly acts, each of which requires some commitment, either of manpower in the form of minions from your lair (who will never return to it and take a while to arrive by helicopter) or of seed cash for operations which won’t garner gold but have other useful knock-on effects.

In each territory in which you operate, you can see the level of heat from local law enforcement; every so often, a territory will go into lockdown so your cell of operatives can avoid capture. The number of territories in which you can operate being dictated by the radio transmitter capacity you have in your control room.

Before long, you must turn your attention to creating minions with particular skills; in the case of Maximilian’s story they’re divided into three categories: muscle, deception, and science. Initially, the first yields guards, the second valets who man the roulette tables and the like in your front operation, and the third technicians who keep all the machinery in your lair running. As you progress, you unlock more sophisticated types of specialisation for your minions and move onto recruiting criminal masterminds to be your henchmen.

In order to acquire the means of training your minions, you employ a tried and tested evil genius method: kidnapping people with the right knowledge and torturing it out of them during interrogation. This necessitates trips to Global Operations, to launch those kidnap heists.

As your criminal organisation takes shape, Evil Genius 2 becomes progressively more frenetic (especially if you select the option to speed up its gameplay). More and more enemy agents begin to appear – if you see them, you can tag them for various dastardly fates, but detecting them requires a lot of vigilance. And there’s a constant background flow involving building extra items, such as power generators and radio transmitters, in order to keep your operations running smoothly. 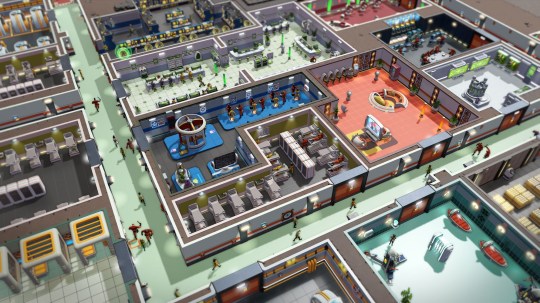 As video games go, Evil Genius 2 is at the more complicated end of the spectrum, but one area where the game excels is its menu system, which has a clear logic to it and is about as simple as you could imagine it being – given the amount of ground it has to cover. Various things run in the background, such as optional objectives, and there’s an inordinate amount of satisfaction to be had when you fulfil one of those and claim the cash reward it offers.

The logic visible in the menu system runs through the game as a whole and the extended tutorial gives you the chance to quickly grasp how it all works, which means that an eventuality which afflicted the first game, in which you found yourself overtaken by events and unsure of what to do to improve matters, has pretty much been eliminated.

Visually, Evil Genius 2 is great. It picks up the original’s endearing Spy vs. Spy-meets-Austin Powers vibe and runs with it very effectively. At times, you will spy animations that make you laugh out loud, and there’s a generous helping of gentle humour, constantly taking the mickey out of cliched, egomaniacal supervillains and the curious things they always seem to do.

Limited previews can sometimes offer false impressions of games; if, say, they run out of steam and ideas halfway through or have annoyingly short single-player campaigns. But neither of those pitfalls would appear to be a problem with Evil Genius 2. The first four of our five hours with it felt like scratching the surface of what it offers, but it also felt worthwhile and, importantly, fun.

Although it wasn’t in the preview, Rebellion has just announced that, for those who love the building aspect in particular, the final game will include a Sandbox mode in which the pressures of keeping the Forces of Justice at bay, and making the most of your global criminal networks, will have been removed.

Thus, Evil Genius 2 should constitute the perfect lockdown game, at least for those who seek games that place a premium on cerebral entertainment above twitch action. It doesn’t hurt if you have a love for James Bond and all its many parodies but even if that aspect means nothing to you this has all the ingredients to become an enjoyable obsession while we’re all confined to quarters.

Which Married At First Sight Australia couples are still together?