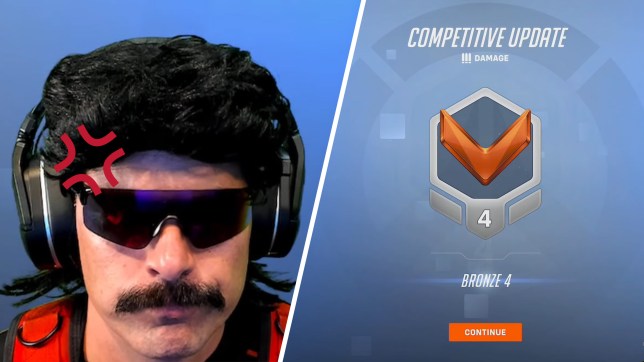 He wasn’t too happy with his rank (pic: Metro.co.uk)

It seems like the Doc has finally moved on to another game, with Overwatch 2, after he grew tired of bashing Call Of Duty over and over.

Dr Disrespect doesn’t shy away from making harsh comments about… anything really. The most common recipient of his affections is none other than Call Of Duty, even though he claims his criticisms come from a place of love.

It seems that now the former Twitch streamer has moved on to another game, namely Overwatch 2, he has no intention of holding back on it either. The game has mostly recovered after facing multiple problems in its first week, though it’s still not managed to steer clear of controversy.

The ranked system of Overwatch 2 has also caused fans to complain, with many returning players claiming that they’ve been placed in lower tiers than usual.

That’s what happened to Dr Disrespect, when the game prompted him to receive a rank during his stream, after scoring seven wins.

The Doc appeared confident, but his smile got wiped away when he saw he was placed in Bronze 4 – the second lowest rank tier. At first, he went completely silent, flabbergasted by the result, but he quickly went back to his old self and started ripping Overwatch 2 apart.

He said that he didn’t belong in the ‘gutter trash rat league’ tier he’d been placed in and wanted to queue for another game immediately.

‘Like someone said, if you don’t play the game or it’s your first time playing, they’re going to throw you deep into Bronze, so that’s all that is champs, right?’ he said.

Then he doubled down to convince both himself and his viewers and blamed the game’s algorithm for putting him in a low bracket. He said the ranked system is punishing him for ‘first-timing’ a role.

‘It doesn’t matter how well you do in that, champs. If you’re a first-time competitor of a role-specific rank list, that’s what they throw me in,’ Dr Disrespect said.

To further prove his skill, the Doc went on to stream for another six hours, playing ranked matches, in what ended up being one of his longest live broadcasts on YouTube.

Although it might take him a bit longer to climb up from the Bronze 4 tier, if he keeps grinding like that, he’ll for sure make it to the top in no time.

Whether he’ll be able to put aside his hatred for Call Of Duty is unclear though, as Modern Warfare 2 will officially launch in less than 24 hours.