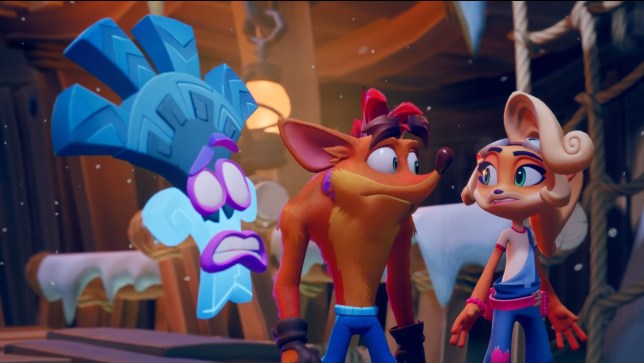 Crash Bandicoot’s comeback seems to have been a surprisingly brief affair (pic: Activision)

Despite a positive announcement from Toys for Bob about working on Call Of Duty, comments from now former staff paint a different picture.

After Crash Bandicoot 4: It’s About Time, many were hoping that developer Toys for Bob would also revive the Spyro series with a new game. Instead, it will become another of Activision’s studios helping to support development on Call Of Duty: Warzone.

Toys for Bob itself made the announcement via Twitter, writing that it ‘is proud to support development for Season 3 of Call of Duty: Warzone, and look forward to more to come.’

While the account obviously portrays the news positively, it sounds like the decision has led to several staff members leaving the studio. Nicholas Kole, a character designer and illustrator who worked on both Crash Bandicoot 4 and Spyro Reignited Trilogy, retweeted the news and called it ‘the end of an era.’

He added later that, while the studio itself is still active, everyone he worked alongside with has been let go.

Itâs the end of an era, but I wish my former coworkers still with TFB all the best with whatâs ahead!

Same! Altho everyone I interfaced with and worked along was let go, Iâm very glad itâs not a totally shuttering

Designer Blake Maloof also announced their departure from the studio, clarifying that they weren’t fired, but the decision only further pushed them into leaving.

I left on my own terms. I had been needing a change anyways, so this just pushed my decision.

Responses on Twitter show plenty of people are worried that this is a sign that Toys for Bob will become a support studio only and not be able to spearhead any projects of its own.

The concerns aren’t completely unfounded. Earlier this year, Activision announced that Vicarious Visions (the studio behind the Crash N. Sane Trilogy and Tony Hawk’s Pro Skater remakes) had been merged into Blizzard and will now only help to work on Blizzard’s own games.

Whether the same fate will befall Toys For Bob is hard to say at the moment but given how much money the Call Of Duty franchise makes, and how long Activision intends to keep supporting Warzone, it’s looking likely that the company wants all possible hands on deck to keep the franchise as profitable as it can be.

What a downgrade and waste of talent

Y’all could keep living in denial about all of this, but remember Radical Entertainment?

Remember how they’d become the de facto developer for Crash Bandicoot and Activision shut down development on all future games, and reduced them to a support team???

Seeing a lot of concerns here from people. Relax Toys for Bob have just been roped in to help out here. This does not at all imply that they`ve been moved to become a dev team for Call of Duty development.

TFB out here getting work! Glad to see it. IDK why everyone else is complaining tho. Its like they only want TFB to only do crash shit. Theyre a dev team, thats what they do: work on multiple games. Not just crash or spyro shit pic.twitter.com/NzKnW4uYWi

As for the future of the Crash Bandicoot and Spyro series, there are some other studios that could potentially helm a future entry. Beenox, for example, developed the Crash Team Racing remake and assisted with development on Crash Bandicoot 4.

The other implication of this news is that there’s not going to be a Crash Bandicoot 5 anytime soon. Although Crash N. Sane Trilogy was a surprise hit Crash Bandicoot 4 did not seem to be nearly as successful, with physical sales 80% less than the remake trilogy in the UK.

That likely paid a significant role in Toys for Bob’s reassignment and may mean that Activision’s most recent experiment with its family friendly franchises is now at an end.

Pfizer Gang and the Sadness of Vaccine Culture