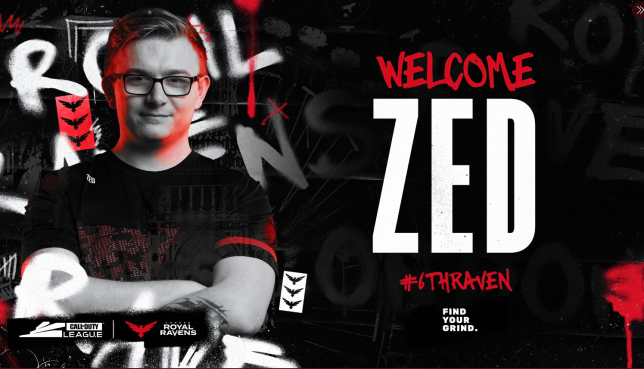 London Royal Ravens have signed Zach ‘Zed’ Denyer for the Call Of Duty League (CDL) Stage 1 Major, who will be standing in for Alex ‘Alexx’ Carpenter who is on leave due to personal issues.

According to a tweet from the esports team, ‘Due to some personal family matters, Alexx will be traveling back to the UK.

‘As a result, we’re welcoming Zed to the roster for the Stage 1 Major.’

There has been no announcement yet of whether this agreement will extend beyond the Major, and how long Alexx will be out of action for.

Zed, who previously played for Paris Legion, has been without a CDL spot since September 2020.

Paris Legion replaced their entire roster at the end of the 2020 season, after being eliminated in the second round of the losers bracket by London at the 2020 CDL Championship.

Zed started his career with Excel Esports back in 2015, and has gained a lot of experience in the European scene since then.

He’s since tweeted that he ‘got the call up from the gaffer last night and of course had to say yes, coming with the fire #6thraven.’

London Royal Ravens have had a tough start to the 2021 season, going five games without a win in Stage 1, making them the only winless team in the entire league.

They will be up against Toronto Ultra in the first round of the Major, who had a win-loss record of 1-4 in Group B of the regular season.

Win that game, and they will face Minnesota RØKKR in the following round, and the games are only likely to get tougher from there.