Bungie won’t be ‘muzzled’ by Sony over abortion rights comments

While Insomniac is forced to keep quiet about the abortion rights debate in the US, Bungie pledges not to be silenced by its new owner.

While the majority of the games industry has kept quiet over the leaked Supreme Court draft, that says it will overturn the Roe v. Wade abortion ruling in the US, Bungie was the first studio to publicly decry it.

Shortly after the leak broke, Bungie called the potential decision ‘a blow to freedom in America and … a direct attack on human rights,’ promising to support any employees that would be affected.

That’s not Sony’s take on the issue though, as PlayStation boss Jim Ryan recently sent out a letter to employees asking them to ‘respect differences of opinion among everyone’ regarding the issue.

With Bungie set to become a first party Sony studio, there are concerns that its new owner will attempt to silence Bungie and prevent it from taking public stances like this in the future.

However, Bungie itself has promised that will not happen, with senior community manager Dylan Gafner saying, ‘There will never be a ‘muzzle’ big enough to stop us from standing up for what’s right.’

CEO Pete Parsons backed up Gafner’s comment, insinuating that if Sony ever attempts to silence Bungie on this or any similar political manners, Bungie will adamantly defy it.

I admit, Iâm just a CM in the grand scheme, but Iâm confident in the following:

We are, and will continue to be, Bungie.

There will never be a âmuzzleâ big enough to stop us from standing up for whatâs right.

At the time, Bloomberg reported that many employees were unhappy with Jim Ryan’s letter, not just for refusing to take a firm stance but also for trivialising the issue, as Ryan also took the opportunity to talk about his cat’s birthday and whether he should buy a dog or not.

In an internal email sent by Insomniac CEO Ted Price, and seen by The Washington Post, Sony will also match the donation and has set up a new initiative to financially assist employees who may need to travel to other states for reproductive care.

However, neither Sony nor Insomniac will formally acknowledge this, with Insomniac employees outright forbidden from talking about it.

In response to a question about tweeting anything to do with the donation, Price explained ‘There would be material repercussions for us as a wholly owned subsidiary.

‘Among other things, any progress that we might make in helping change [Sony Interactive Entertainment’s] approach would be stopped dead in its tracks. We’d also probably be severely restricted from doing important public-facing work in the future.’

Price adds that it’s the same situation for all of Sony’s internal studios, saying ‘It will not approve any statements from any studio on the topic of reproductive rights. We fought hard for this and we did not win.’

‘For the most part, our ability to tweet has been unfettered. However, there are rare times when we’re in opposition (like this week) and [Sony Interactive Entertainment] will have the final say,’ he added. 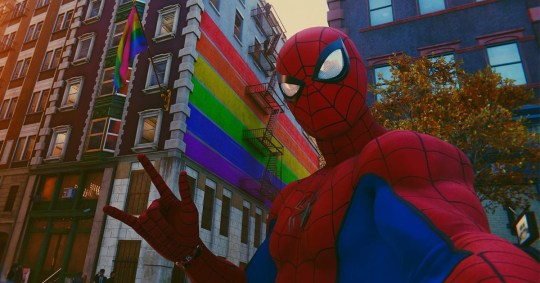 Insomniac’s mad political statements in the past (pic: Insomniac Games)

So, what makes Bungie think it can get away with speaking out when Insomniac can’t? It could be to do with how, if the acquisition goes through, Bungie won’t be a first party studio in the same way as other Sony developers.

When it was announced, Sony explicitly said that Bungie would remain independent to the point where its games could continue to release for rival platforms. So, it likely retains a level of autonomy that ingrained studios like Insomniac don’t have.

Other developers to condemn the Supreme Court’s decision include Psychonauts 2 developer Double Fine and Guilds War 2 developer ArenaNet, as well as smaller studios like Hinterland Studios and Outerloop Games.

However, no publisher has made any kind of public comment, no doubt so as not to alienate the part of their audience that does want abortion to be made illegal.

This is despite the industry as a whole showing support for the Black Lives Matter movement in 2020 and making public donations to related charities. More recently, the industry’s been very vocal with its condemnation of Russia’s invasion of Ukraine.

The one exception is Microsoft which, much like Sony, will ‘support employees and their enrolled dependents in accessing critical health care – which already includes services like abortion and gender-affirming care – regardless of where they live across the US.’

In a statement to Business Insider, it added ‘This support is being extended to include travel expense assistance for these and other medical services where access to care is limited in availability in an employee’s home geographic region.’

‘It was perfect’: Horror film fanatics marry at gothic-themed wedding