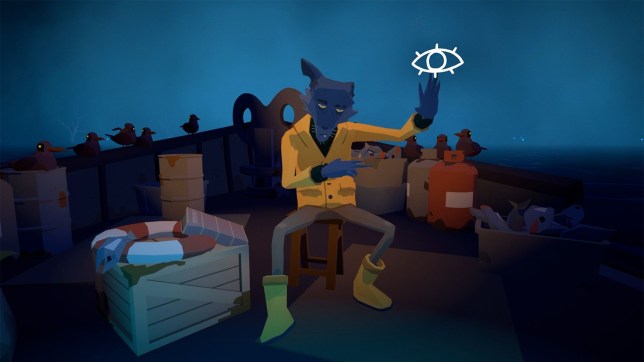 Before Your Eyes – don’t press any button to continue (pic: Skybound Games)

A video game where the only way you can interact with it is by blinking is a pretty peculiar idea, but it works surprisingly well.

If there’s one key difference between how gamers and non-gamers perceive video games it’s how intimidating a controller seems to those that are not used to it. Experienced gamers never realise just how complex they appear to others and how moving two analogue sticks at once is an entirely alien concept, that has to be learnt and practised. That isn’t a problem with Before Your Eyes though, and neither is the worry that, because this is a PC game, you’ll need to use the keyboard as well. What you will need though is a webcam.

The premise behind Before Your Eyes is that the main character has recently died and needs to justify himself to a ferryman style spirit in order to secure a comfortable afterlife. This involves relieving the most important moments of protagonist Benny’s life, from a child to the moment of his death, and allowing both the ferryman and you, the player, the chance to see what kind of person he was.

As you watch the game’s story unfold the webcam in turn watches you, and while you can move your head around using the mouse you can only select things by blinking. There are no puzzles as such, but an onscreen metronome allows you to forward time by blinking, while more than once you’re challenged to stare at the webcam for as long as possible without blinking. Which is… an unusual concept for a video game.

Before Your Eyes is not even two hours long, so it’s very difficult to discuss its story without risking spoilers, especially as there’s more than one shock revelation that forces you to reassess everything you’ve seen up until that point. But Benny isn’t a superhero or chosen one, he’s just a normal guy who’s lived a life that, while uneventful from an action video game perspective, is filled with love, loss, and all the concerns of a normal person’s life.

He’s very easy to empathise with, which is of course the whole point of the first person view, and when those plot twists do come it can be genuinely heart-wrenching. Video games very rarely show ordinary people doing ordinary things, and they’re generally terrible at portraying love and romance, but while Before Your Eye’s script can be a little clunky and obvious at times its heart is in the right place and so will yours be when the big revelations start to happen.

You don’t have much input on where the story goes – you are, after all, watching events that have already happened – but there are important choices to make during the game, that do affect how things play out.

And while there aren’t any complex puzzles there are some clever uses of the webcam, including trying to keep your eyes open for as long as possible to keep a particular memory going or closing your eyes so you can listen in to other people’s conversations. 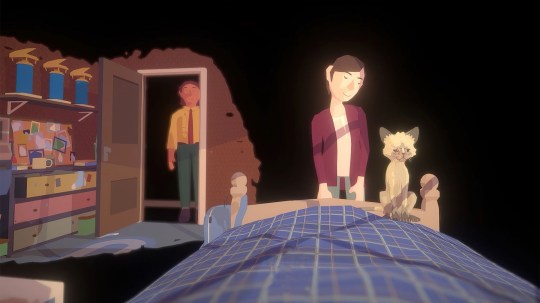 As far as utilising the webcam as a control system goes, the game really does seem to wring every once of potential out of the concept, in an almost Nintendoian way. Although we imagine developer GoodbyeWorld would’ve preferred the game to use headtracking too, instead of having to rely on the mouse for that, but that seems to have been beyond their abilities.

Whether the idea to make a game you control by blinking came first, or GoodbyeWorld added it in later, we’re not sure but while it works perfectly in theory, in terms of how well it suits the game and its story, the technical side of things often causes problems. It’s probably going to depend a lot on what brand of webcam you have and your lighting conditions – and how good you are at sitting still – but it doesn’t take much for everything to get out of kilter and for the controls to just flat out not work, requiring you to recalibrate.

You can default to just using mouse clicks but that immediately spoils the sense of immersion and the whole point of the game being designed the way it is. The fact that the script can also let all the good intentions down is also a shame, with the voice-acting being competent but not good enough to compensate for the sometimes awkward dialogue.

Given its low price and the novelty of its ideas Before Your Eyes is a game that easily survives its flaws and as long as the technical issues do not become too serious – which may be a difficult thing to anticipate before buying it – it achieves its central goal of investing you in the life and death of a very atypical video game protagonist. Seeing someone else’s world through their eyes has never been taken so literally before and even with the game’s problems it’s a touchingly emotional experience.

Before Your Eyes review summary

In Short: What sounds like a silly gimmick works extremely well at immersing you into the life of another, although the technical problems can be severe.

Pros: Great concept and the constantly evolving plot is highly engaging, despite the laidback storytelling. When it works the use of the webcam is very clever.

Cons: The technical side of things rarely works exactly as intended, with constant recalibrations needed. The script isn’t as good as it could be and the voice-acting is merely competent.