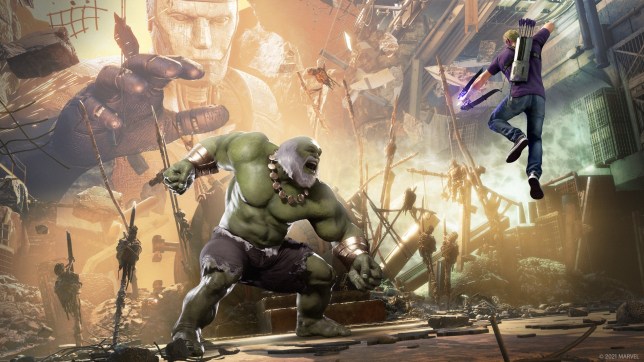 Crystal Dynamics has clarified that the MCU-inspired outfits for its Avengers game must be paid for and some aren’t happy about that.

With an actual roadmap of content and the promise of the highly demanded Black Panther in the summer, it looked like Square Enix and Crystal Dynamics’ Avengers game could be on the road to recovery.

But, once again, the game has found itself in hot water concerning the addition of new outfits that are inspired by the Marvel Cinematic Universe, namely for the fact that you will need to pay for them.

A few days ago, a post on the official Twitter account advertising the upcoming Red Room Takeover event stated that it will feature ‘rewards like animated nameplates, outfits inspired by the Marvel Cinematic Universe, a deadly HARM Room hacked by Yelena Belova, and more secrets to decrypt.’

Many read this to mean that the outfits in question would be unlockables but, earlier today, a follow-up post was made to clarify that these outfits will only be available in the in-game marketplace to be purchased with credits.

Credits are an in-game currency and, while they can be earned through play, the game also sells them in exchange for real money.

To clarify, the outfits inspired by the Marvel Cinematic Universe will be available exclusively in the Marketplace for purchase with credits.

They give all story, new missions and characters for free, in order to develop those things they need a source of income. Iâm okay with this.

Free shit content every 4 months and stuff thatâs integral to superhero games (takedowns and costumes) are locked behind 15 dollar paywalls.

âNothing but a cash grabâ Theyâre trying to turn a profit, yes. Thatâs the point of the marketplace. To gain continued profit in order to support the ongoing live service experience. That is also the point of selling games. I donât think they ever said these skins would be free.

Unsurprisingly, many have reacted to the news with disappointment or anger, but there seem to be just as many who defend the decision, arguing that it’s justified since the game regularly receives free content and needs to recoup money somehow.

Regardless, this is but another bullet point in the long list of disasters to befall Avengers ever since its less than stellar launch. It’s player-base has gradually dwindled and while it has attempted to win players back with two expansions, which added two new playable heroes, both characters are just different versions of Hawkeye.

Dedicated PlayStation 5 and Xbox Series X/S versions are now available, but they coincided with an update that deliberately made levelling up characters take longer, a move that was met with near universal criticism.