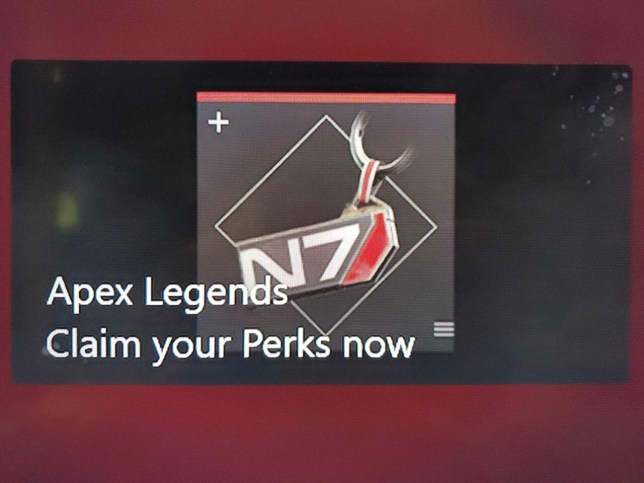 A new Apex Legends item clearly inspired by Mass Effect has been spotted, which is likely to tie in with the Mass Effect remaster.

With how indulgent Fortnite has been with its numerous crossovers, ranging from Star Wars to DC Comics, it probably shouldn’t be too surprising to learn that rival battle royale Apex Legends could be about to do something similar.

Granted, nothing has been officially announced yet by either Respawn or EA, but one Apex Legends player has spotted an image of what is clearly a Mass Effect themed item on the Xbox Series X dashboard.

The image was sent to GameSpot, who has verified its authenticity. It’s not entirely clear what the item is meant to be, but the likeliest possibility is that it’s a weapon charm. One thing that’s undeniable is that it’s related to Mass Effect, as it bears the iconic N7 code seen on main character Shepard’s armour.

While the dashboard icon reads ‘Claim your Perks now,’ clicking on the icon apparently just takes you to the perks page, where there is no mention of a Mass Effect item – which suggests that the promotion has been posted ahead of schedule.

A couple of other Mass Effect gun charms were found through datamining, courtesy of Apex Legends leaker Shrugtal, back in November (as well as ones for Mirror’s Edge and Plants Vs. Zombies), but Shrugtal claimed that these would be rewards for subscribing to EA Play. The N7 charm wasn’t included among them so how you’ll be able to earn it for yourself is still a mystery.

With Mass Effect: Legendary Edition, a remastered collection of the original trilogy, launching in May, it’s probably safe to assume that the item is to tie in with its release and will become available around the same time.

Apex Legends is available now on PC, PlayStation 4, Xbox One, and Nintendo Switch.