There’s another chance to be disappointed by a new Aliens video game, although at least Fireteam looks better than Colonial Marines.

There are few movies that have had more influence on video games as a whole than Aliens and it’s tragic to think that the best official tie-in so far, if you don’t count the various Predator crossovers, is still the 1987 Commodore 64 game by Electric Dreams.

Alien Isolation was based on only the original movie and while it didn’t stick the landing in terms of story it was so atmospheric it almost felt like Ridley Scott himself had made it.

Whether you’ll think James Cameron was involved in new game Aliens: Fireteam remains to be seen but based on the trailer it looks… not awful?

Obviously, 2013’s Colonial Marines is the gold standard for disappointing Aliens games but while this new one seems okay the way the aliens run looks much more like dogs than the human-derived creatures in the movie. And unless you’re meant to be in the outer space equivalent of Battersea Dogs Home we don’t think that’s meant to be deliberate.

Still, a co-op shooter is a perfectly reasonable way to adapt the movie, even if some will no doubt be upset that there doesn’t seem to be much storytelling going on.

There is a plot though, with the game set 23 years after the original trilogy, as you play as a team of Colonial Marines investigating a distress call from an outer colony.

There are four separate campaigns, where you can play with two friends or computer-controlled team-mates and 20 different types of alien, as well as android enemies (or artificial person if you prefer). 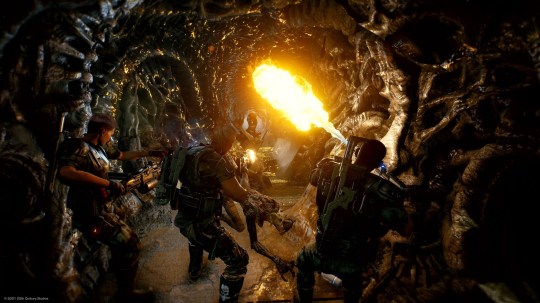 Aliens: Fireteam – will it do the movie justice? (pic: 20th Century Games)

The impression from the trailer is of a Left 4 Dead style PvE shooter, with the ability to customise characters in five different class types, and pick your loadout of customisable weapons and gear.

Something called a Challenge Card system allows you to ‘mutate’ each mission, presumably with different rules and enemies/equipment drops.

The game is by new developer Cold Iron Studios, who is known to have been working on a new Aliens game for some time – although this is the first time it’s been seen in public.

Aliens: Fireteam will be released this summer for Xbox One, PlayStation 4, Xbox Series X/S, PlayStation 5, and PC.