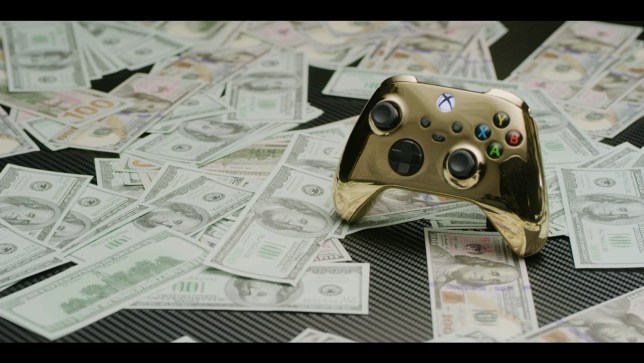 Owning an Xbox Series X has put people in an increasingly less exclusive club during the last month or so, but if you want to keep yourself above the hoi polloi then you could always… buy a solid gold version of the controller?

For some reason, unofficial gold consoles and controllers are one of the first things to appear once a new console launches, with a gold-plated PlayStation 5 having already been announced last year.

The same thing happened with previous generations but so far there hasn’t been a gold Xbox Series X (unless you count someone just getting a spray can out). There is a solid gold Xbox controller though, even if you can’t buy it in shops.

The controller was created by YouTube channel Linus Tech Tips, who claim it cost around $87,500 (£63,000) to make and is therefore, unofficially, the most expensive controller ever made.

The very obvious problem with the controller, apart from the enormous waste of money, is that joypads are carefully weighted and balanced and gold is really heavy – so this one is a nightmare to use, as you can see from the videos.

The controller was cast from 1.5kg of 18-karat gold by a Canadian company called Expert Casting and the channel will be making multiple videos in order to pay for it – hopefully one of which will explain why they bothered in the first place.

The Xbox Series X/S controller has been criticised for not offering any major improvements over the Xbox One controller but it’s so far received the fewest number of complaints about joystick drift, compared to the Nintendo Switch and PlayStation 5 – even though they all use the same basic components.

There have been reports of issues with unresponsible face buttons, which Microsoft has acknowledged, but they don’t seem particularly widespread. If the gold controller has problems though Linus will have to fix it themselves.