FRENCH tennis star Benoit Paire appeared to give up during defeat at the Argentina Open.

It was the conclusion to a crazy game for the 31-year-old who had already got into an angry argument with the chair umpire, spat on the court, sworn and been docked a point. 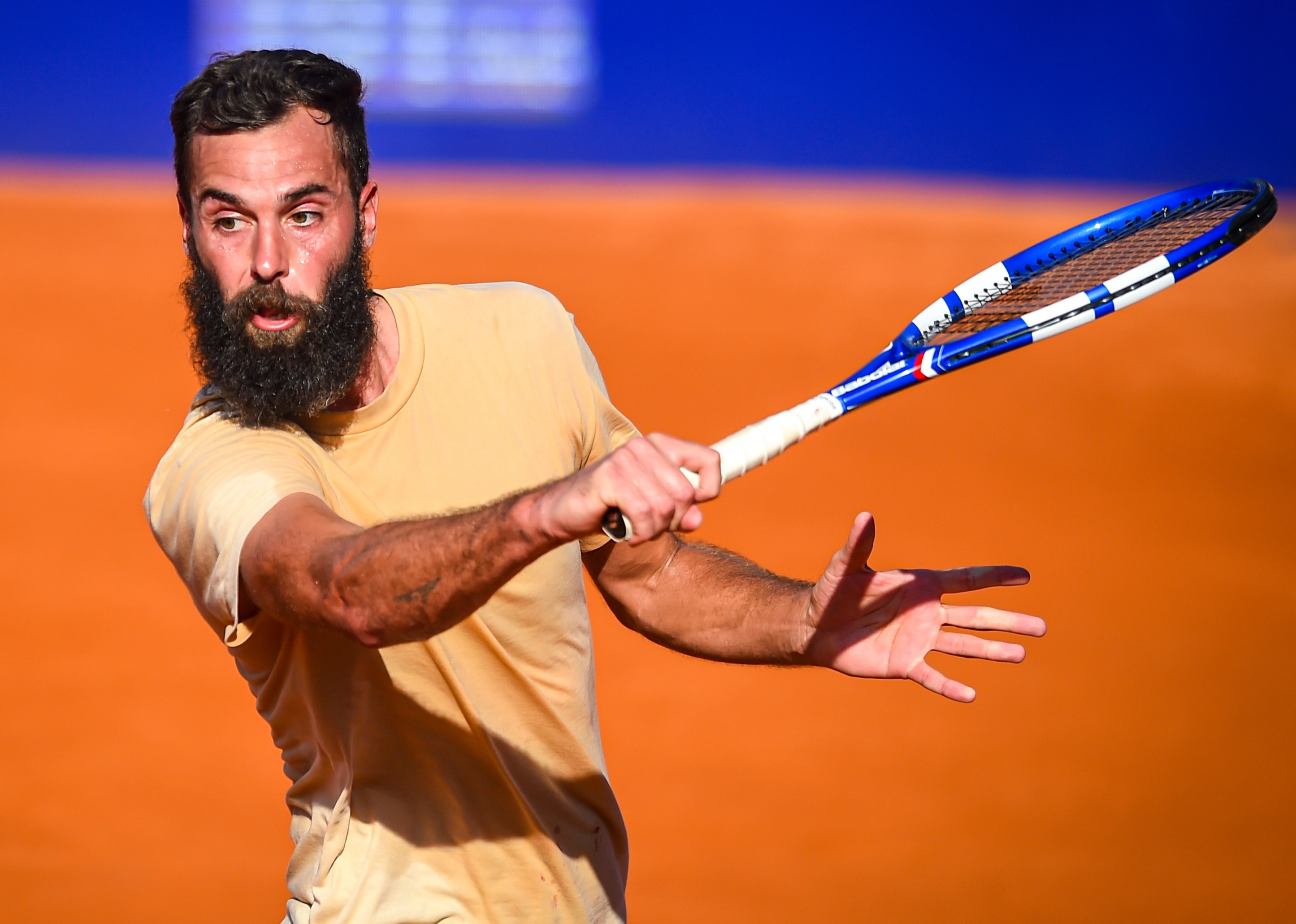 Benoit Paire was involved in yet another furious implosion as he appeared to give up at the Argentina OpenCredit: Getty Images – Getty 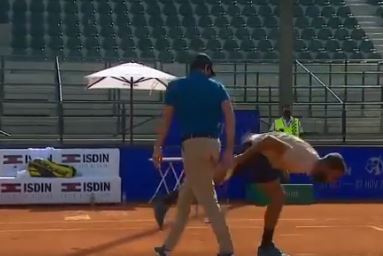 The Frenchman spat into the clay when a line call went against himCredit: Twitter @ArgentinaOpen 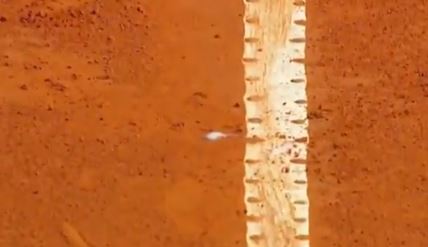 Paire spat again later in the second set and was docked a pointCredit: Twitter @ArgentinaOpen

He seemingly ‘tanked’ at the end of the match… then went on to boast about his £6million tennis career earnings.

Everything appeared to be going smoothly for the world No29 – seeded third at the tournament – as he claimed the first set 6-4.

But a Cerundolo serve during the second set imploded Paire into a self-destructive rage.

The ball down the middle was called in – Paire disagreed and pointed to what he believed was the mark in the clay proving it was out.

Umpire Nacho Forcadell got down and decided the ball had caught the line – he gave Cerundolo the point as Paire lost his cool and the few spectators began to whistle and jeer.

Realising he was fighting a losing battle, the Frenchman leant down and spat at the mark, swore and marched to the back of the court, receiving a warning for his conduct.

Later in the second set he was docked a point for spitting again – just as he did at last year’s ATP Cup in Australia – as his 22-year-old opponent, playing in his hometown, battled back to take the second set 6-3. 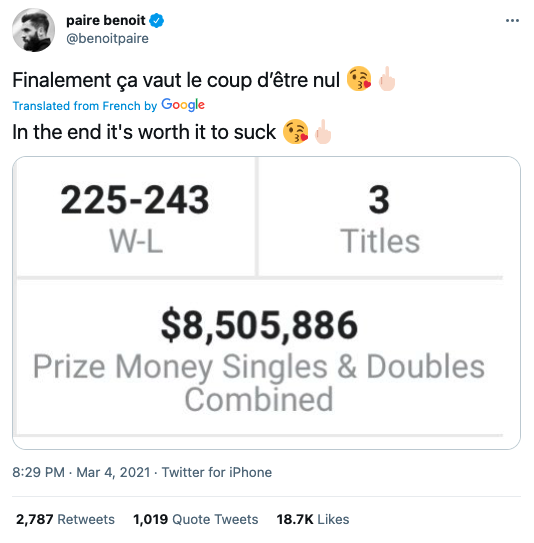 Paire shared a grab showing his career earnings after the match

Six games later, hot-head Paire, who has a history of struggling to control his emotions on the court, trailed 5-1 in the decider and served to stay in the match.

But by this point, his head had clearly gone as he served two wild double faults to hand world No137 Cerundolo the win.

Paire even pathetically hit the last second serve way out while the ballboy was collecting the ball from the first serve, which he casually dumped in the net.

Soon after his exit, the former world No18 – who has reached the fourth round at Wimbledon twice – took to social media and shared a screenshot showing his $8.5m (£6.1m) prize money.

He captioned the post: “In the end it’s worth it to suck,” with kiss-face and middle-finger emojis.

Others translated the comment to read: “In the end it’s useful to be useless.”

Paire is expected to be handed a fine for his on-court behaviour as his miserable start to the 2021 season continued with a fifth defeat out of six singles matches.

He was dumped out in the first round of the Australian Open to Belarus player Egor Gerasimov, describing the tournament and its organisation as ‘s***’, ‘c**p’ and ‘grotesque’. 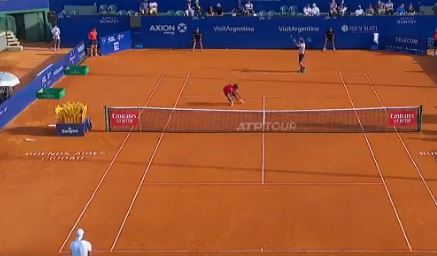 The world No29 hit his final serve of the match way out – while the ballboy was still collecting the ball from his first serveCredit: Twitter @ArgentinaOpen 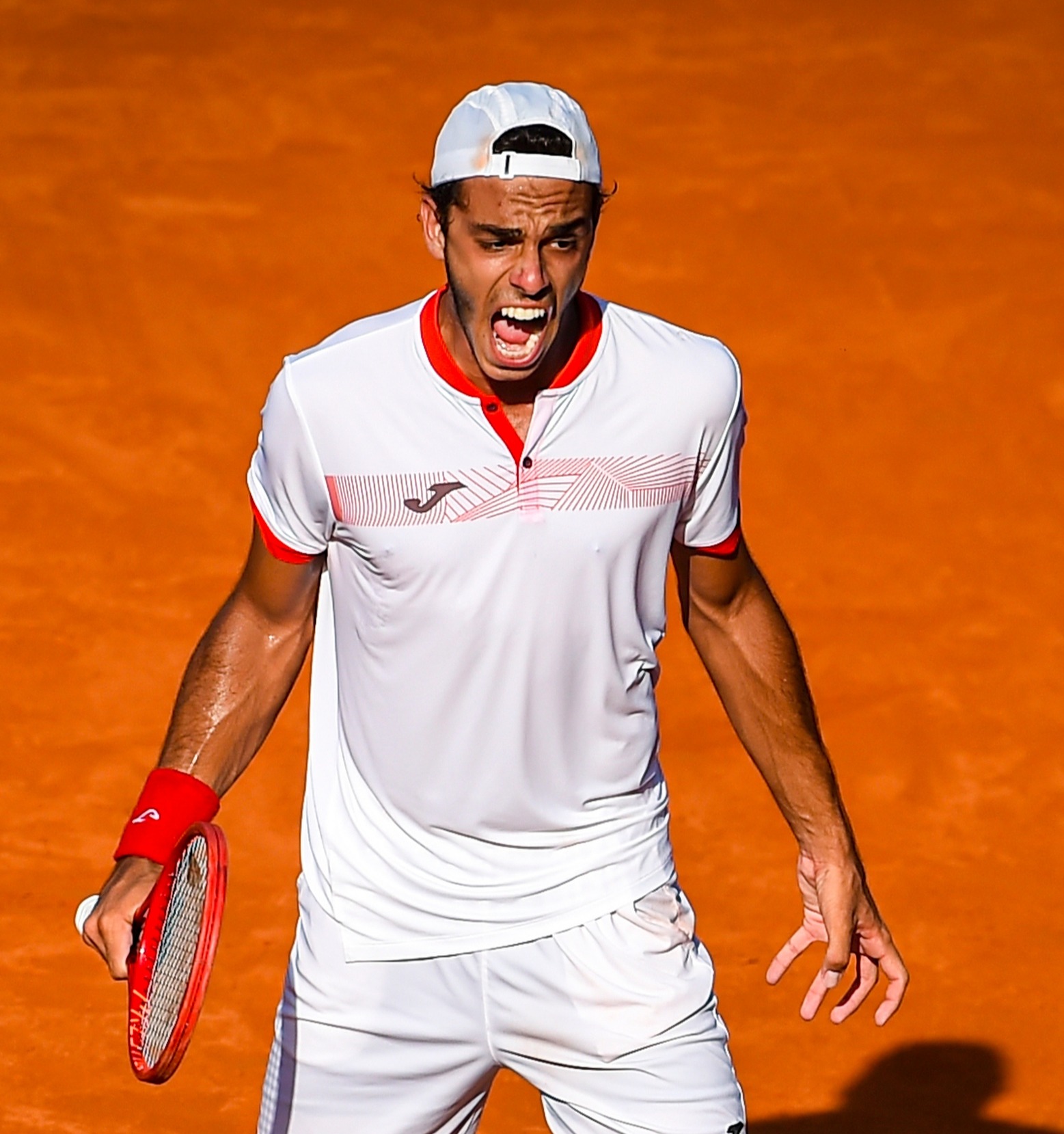 Local hero Francisco Cerundolo made the most of his opponent’s meltdown to win 4-6 6-3 6-1Credit: Getty Images – Getty