TETCHY Novak Djokovic will have to replace one mangled tennis racket in his kit bag after a 19th Australian Open match win in a row.

The world No.1 showed both sides of his character – the brilliance and the petulant – in the early hours of Wednesday morning in Melbourne, which is why he remains such a compelling sportsman to watch. 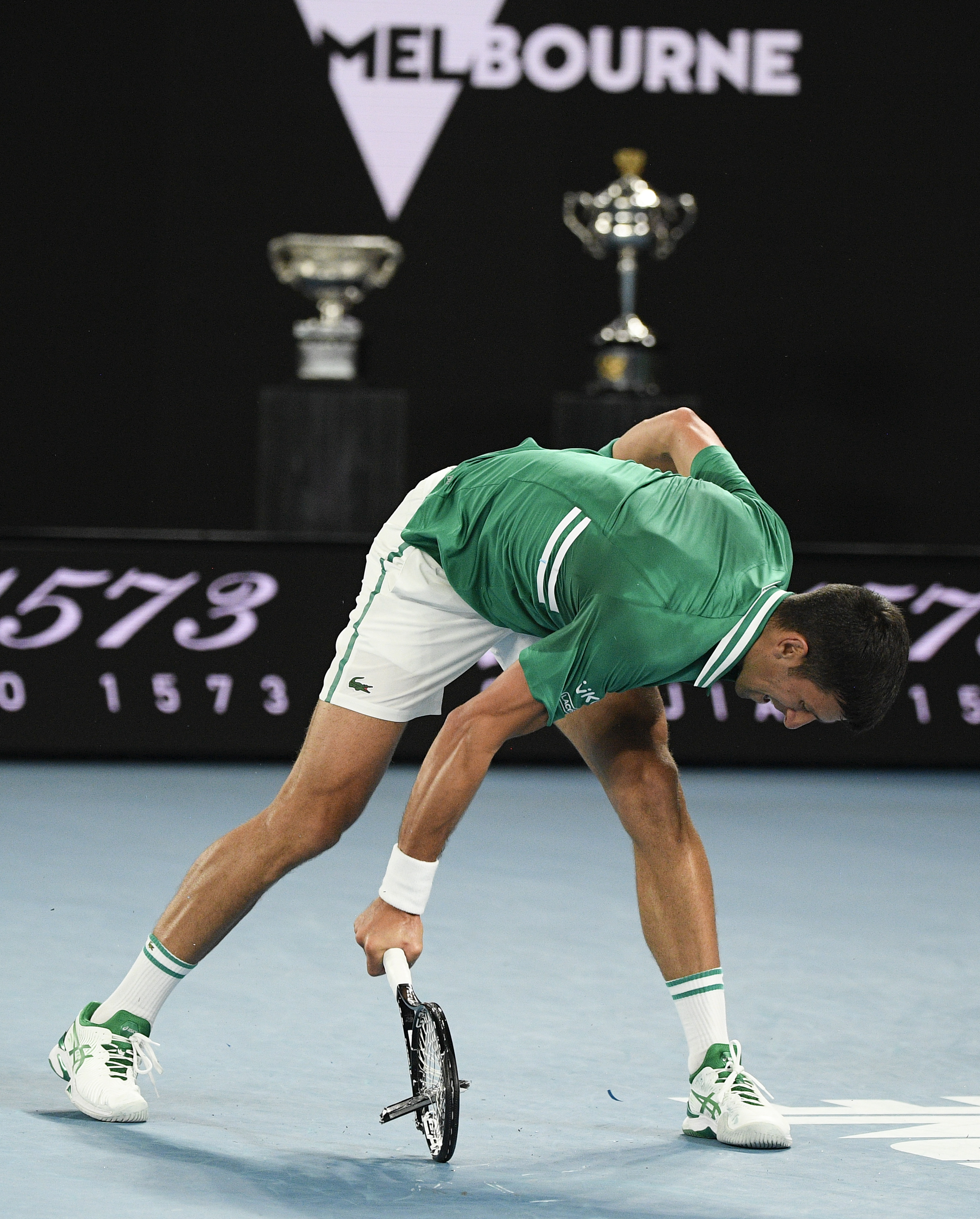 Novak Djokovic took out his frustrations despite moving into the Australian Open semi-finalsCredit: AP:Associated Press 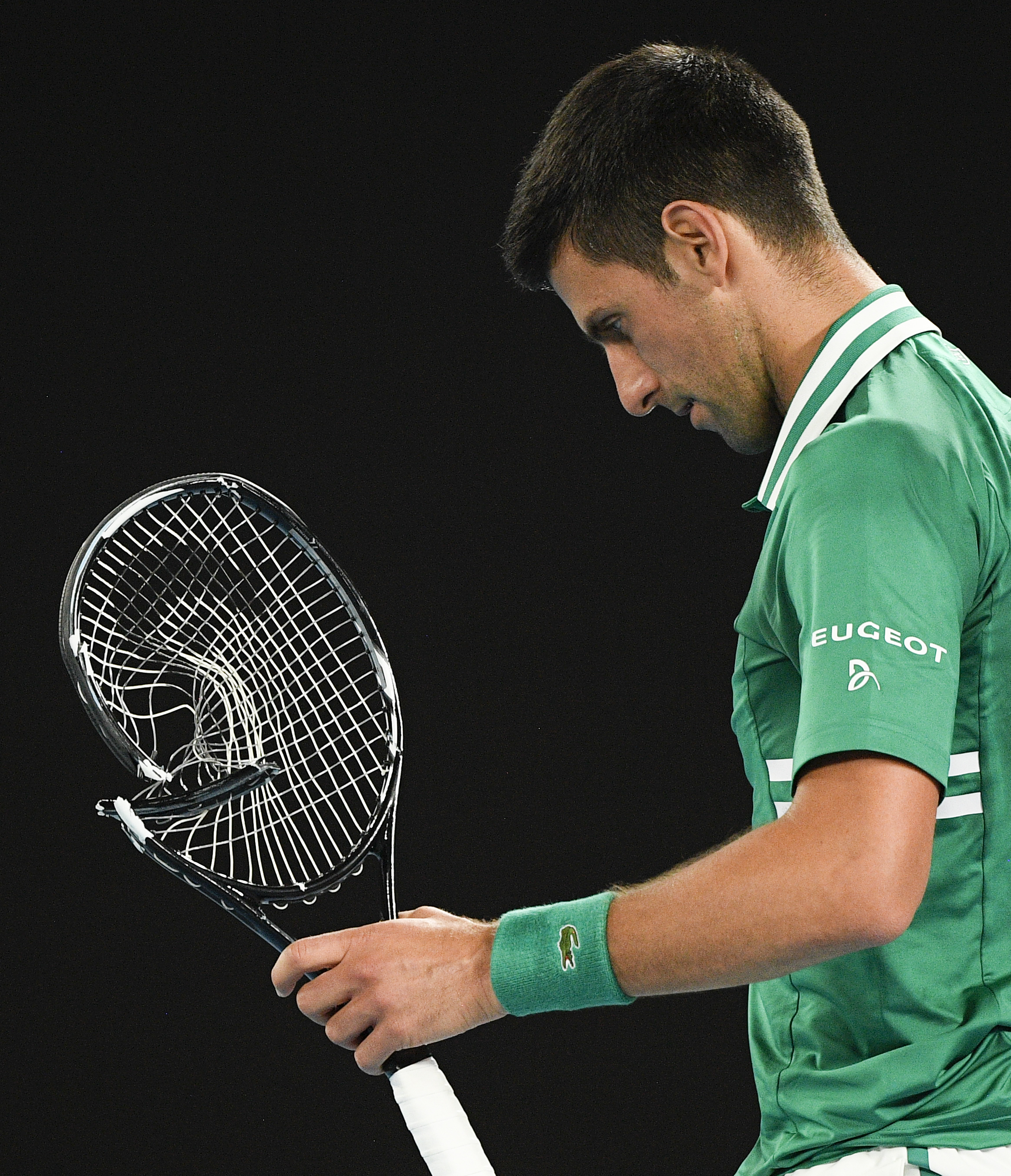 The damaged racket will have ended up in the bin following the almighty outburst in the fourth setCredit: AP:Associated Press

Betraying no signs of significant injury or physical discomfort, Djokovic came from behind to knock out German Alex Zverev 6-7 6-2 6-4 7-6 to reach a 39th Grand Slam semi-final.

Yet in the fifth game of the third set, the world No.1 let rip on the court after losing deuce point, smashing his equipment THREE TIMES in a row.

The racket was completely ruined and the umpire had little choice but to award a code violation for the indiscretion.

What made it worse was that Zverev was forced to wait before serving out the game as Djokovic went over to his chair to locate a new racket.

And then to compound the situation, Djokovic had the audacity – some may say arrogance – to ask the umpire for the mess to be cleared up.

A poor ball girl had to get on her hands and knees to clean up the shattered bits scattered all over the Rod Laver Arena. 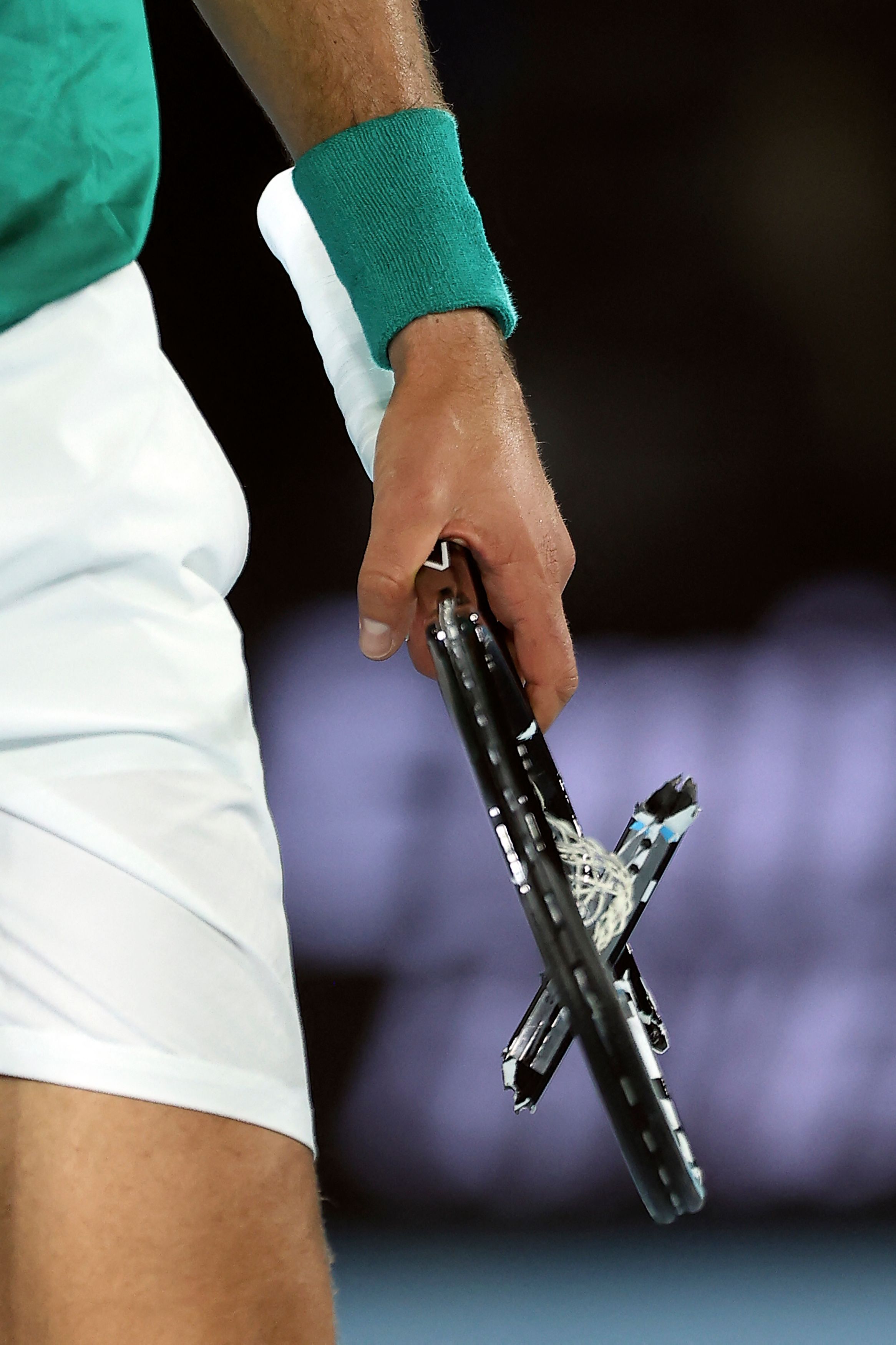 The Serbian was given a code violation by the umpire for racket abuseCredit: AFP or licensors 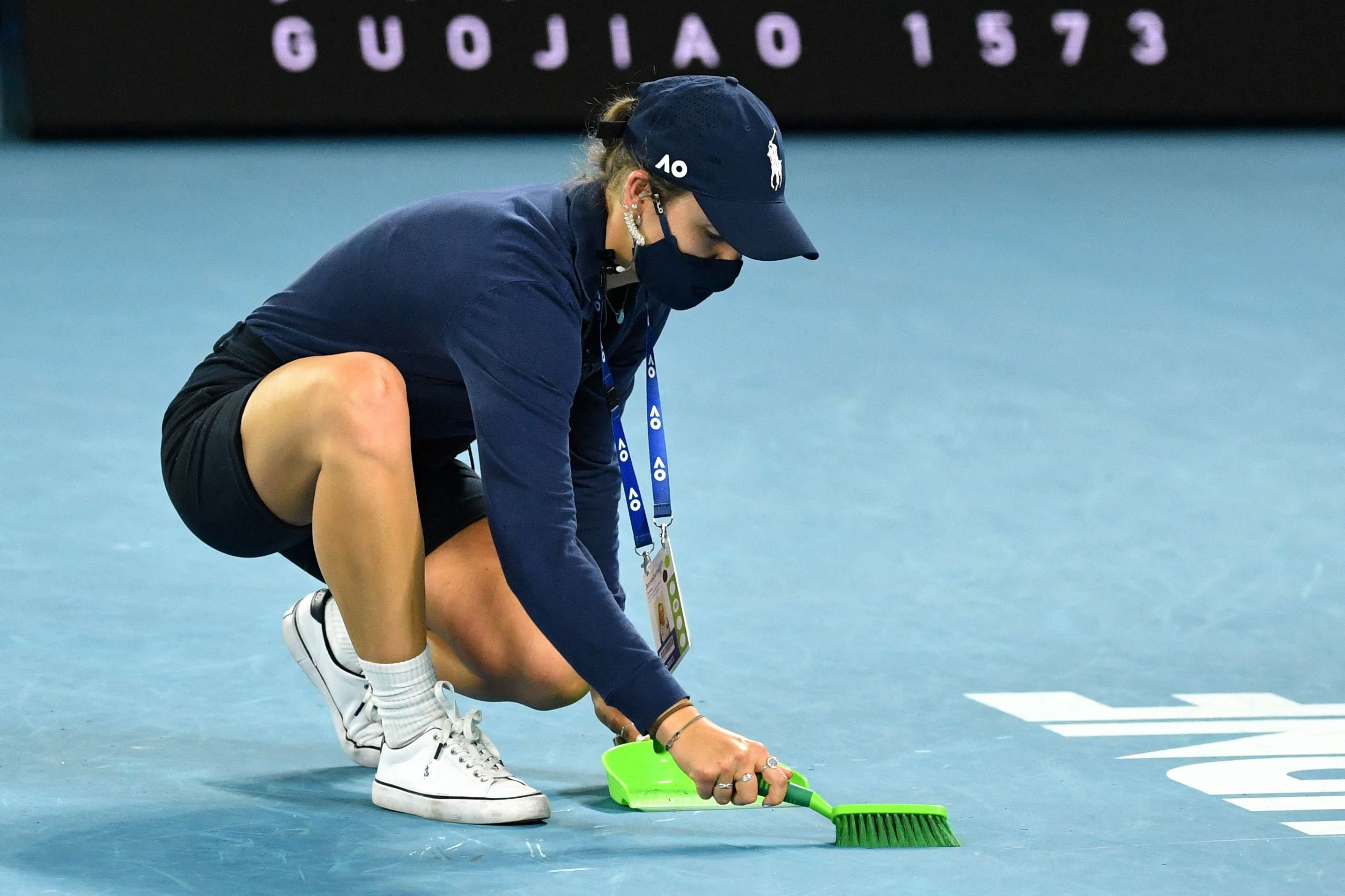 A ball girl had the unenviable task of cleaning up the mess left by the world No.1Credit: AFP or licensors

The Eurosport commentators were not impressed, saying: “I suppose if you’re going to break a racket, do it in style.

“The court has held up pretty well considering. It was smashed to smithereens. It’s everywhere!

“Novak has been harnessing that a while. It will cost him – but it would cost him a lot more if he did it at Wimbledon.”

The co-commentator added: “Djokovic has asked for it to be cleaned. Maybe he should do it. He did the damage himself.”

Djokovic later said the incident fired him up, he “regained focus” and things “shifted in a positive direction” as he went on to complete a 301st win at a Grand Slam.

Djokovic, who saved a fourth-set set point with a 199km/h ace, will now play Russian rookie Aslan Karatsev in the last four on Thursday.

The 33-year-old has been playing with pain in recent days and though he is not as bad as initially feared, the side injury has meant he has not practised properly on his days off. 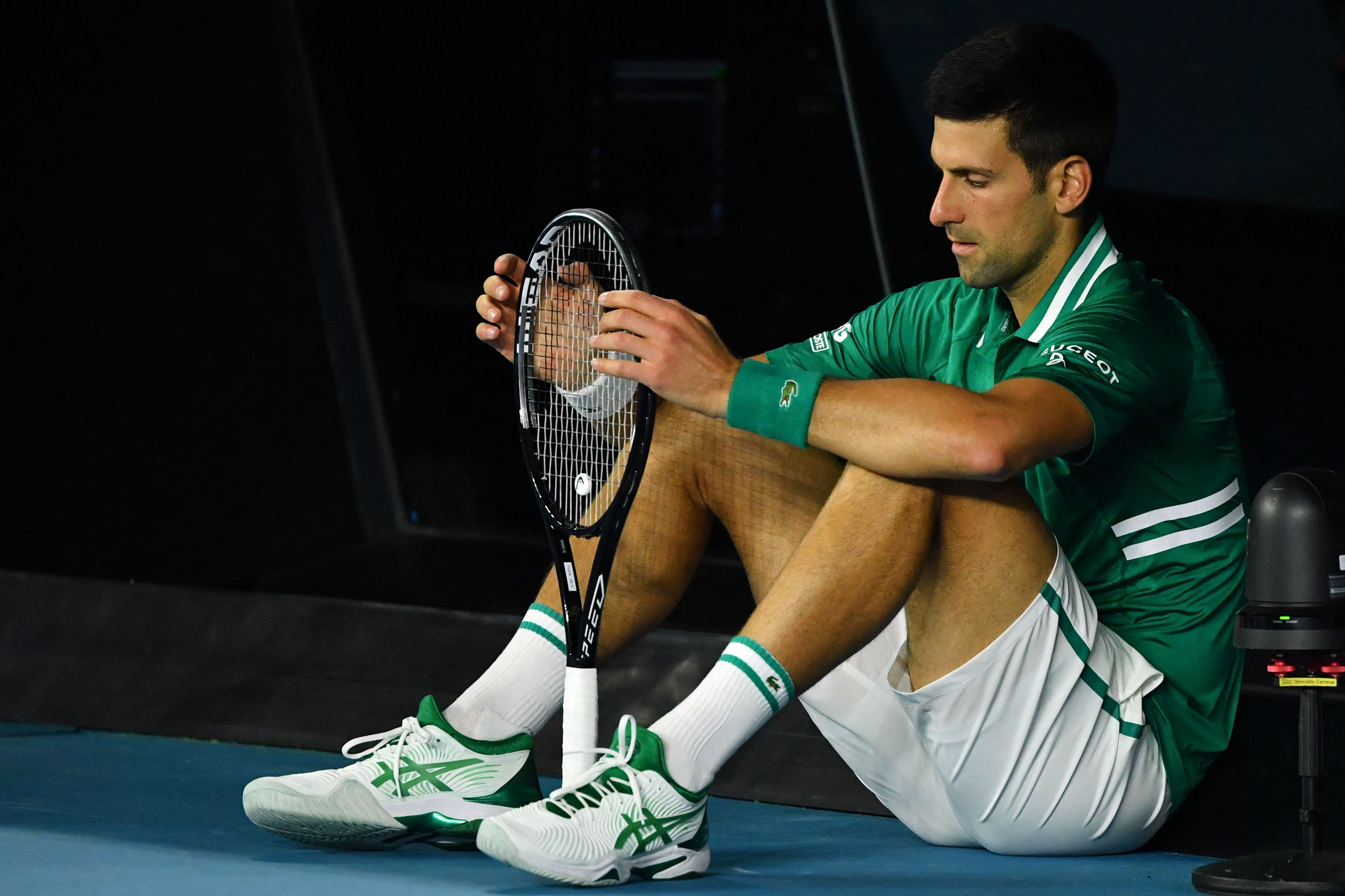 Djokovic took a breather by the side of the court as he waited for Zverev to change racketsCredit: AFP or licensors 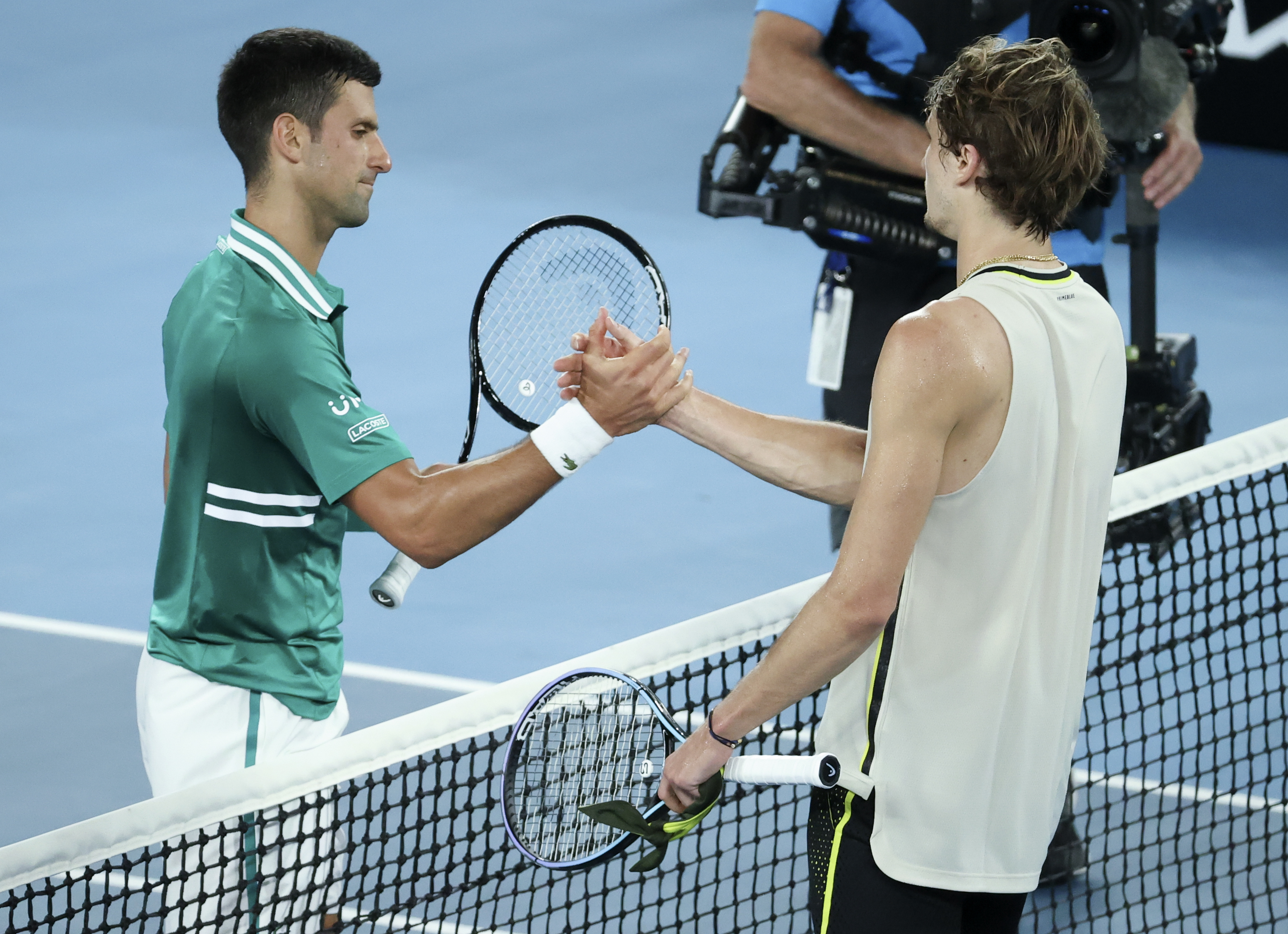 Djokovic saved a set point which would have seen the match decided in a fifth set in MelbourneCredit: AP:Associated Press

He said: “I’ve suffered various injuries during my career in Grand Slams. It’s not the first time it has happened.

“But the magic hands of my team and ATP physios have helped me out.

“It will take time for me to warm-up so I can feel I will rotate well. I was lucky to get that break.

“It was a close first tie-break. After that I felt I started to move better and serve better.

“Down to the very last shot it was anybody’s match, a lot of nerves and pressure.

“Emotionally I feel drained now. We pushed each other to the limit.”

When is Married at First Sight UK returning?