MAVERICK Nick Kyrgios ordered a member of his entourage to kick their girlfriend out of his Australian Open box during a bizarre yet typical on-court outburst.

But a few hours after progressing to the second round in Melbourne, a more relaxed and laidback Kyrgios branded Novak Djokovic a ‘strange cat’ and again criticised the world No1’s antics last summer. 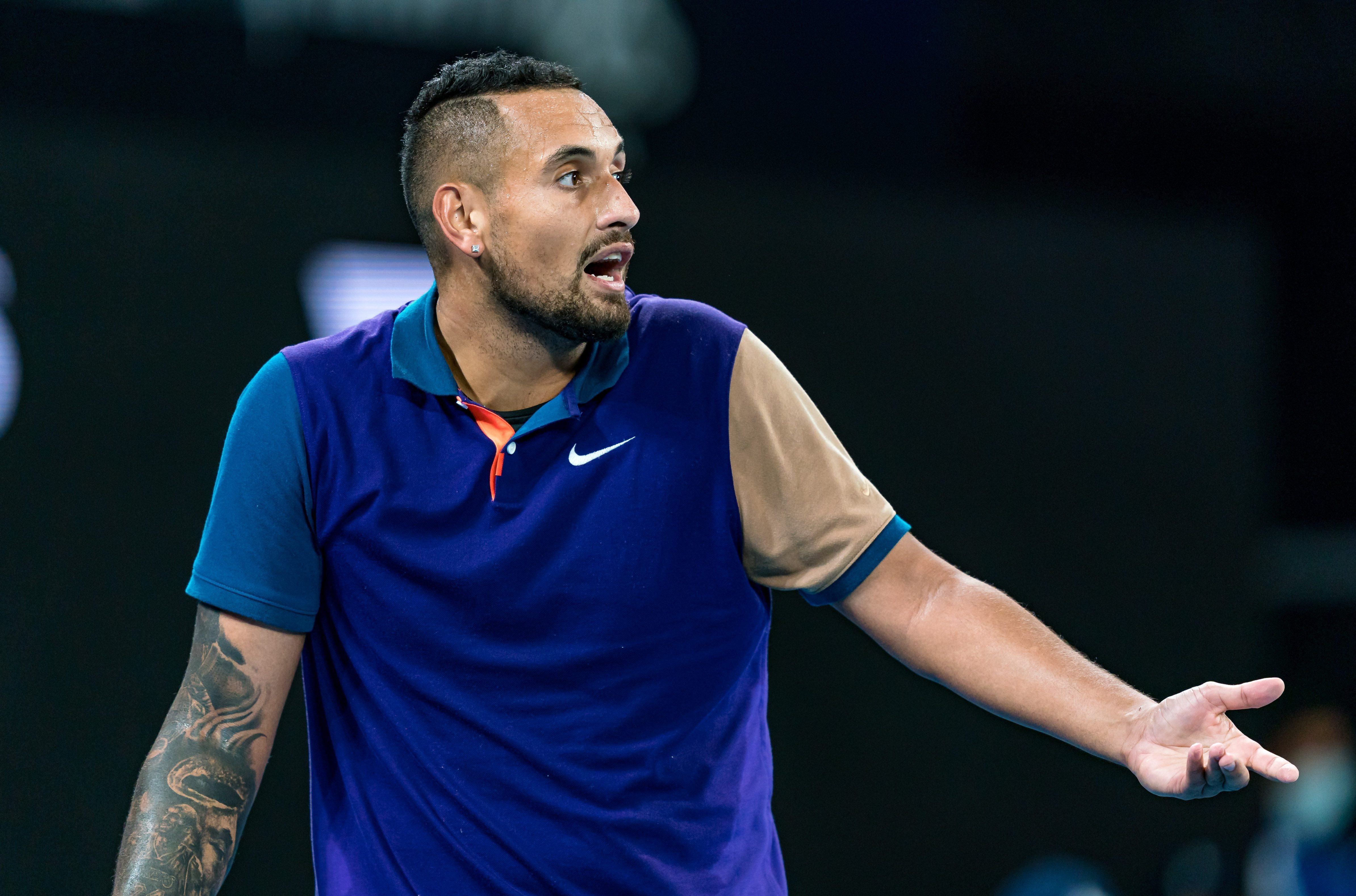 Nick Kyrgios was unhappy with his box but said he is just a ‘nutcase’ on court at timesCredit: Getty Images – Getty

The 25-year-old knocked out Portuguese Frederico Ferreira Silva 6-4 6-4 6-4 in the first round and will now play Frenchman Ugo Humbert, the no.29 seed.

Yet the old demons and characteristic mutterings resurfaced after just two games of the opening set.

After being broken and falling 2-0 down, Kyrgios said to himself: “Are you awake? You’re saying one thing for two games.”

During a marathon third game, Kyrgios could be heard shouting up to a member of his entourage: “Tell your girlfriend to get out of my box!”

It is unclear who the comment was directed at.

Some thought it was his brother Christos’s girlfriend but he denied that and refused to reveal the true identity of his target as the red mist descended.

Asked to clarify what happened, Kyrgios laughed: “I’m a nutcase when I’m on court.

“It was just heat-of-the-battle type stuff. It was just being out there, all those emotions again.

The crowd came to see a Nick Kyrgios tweener… 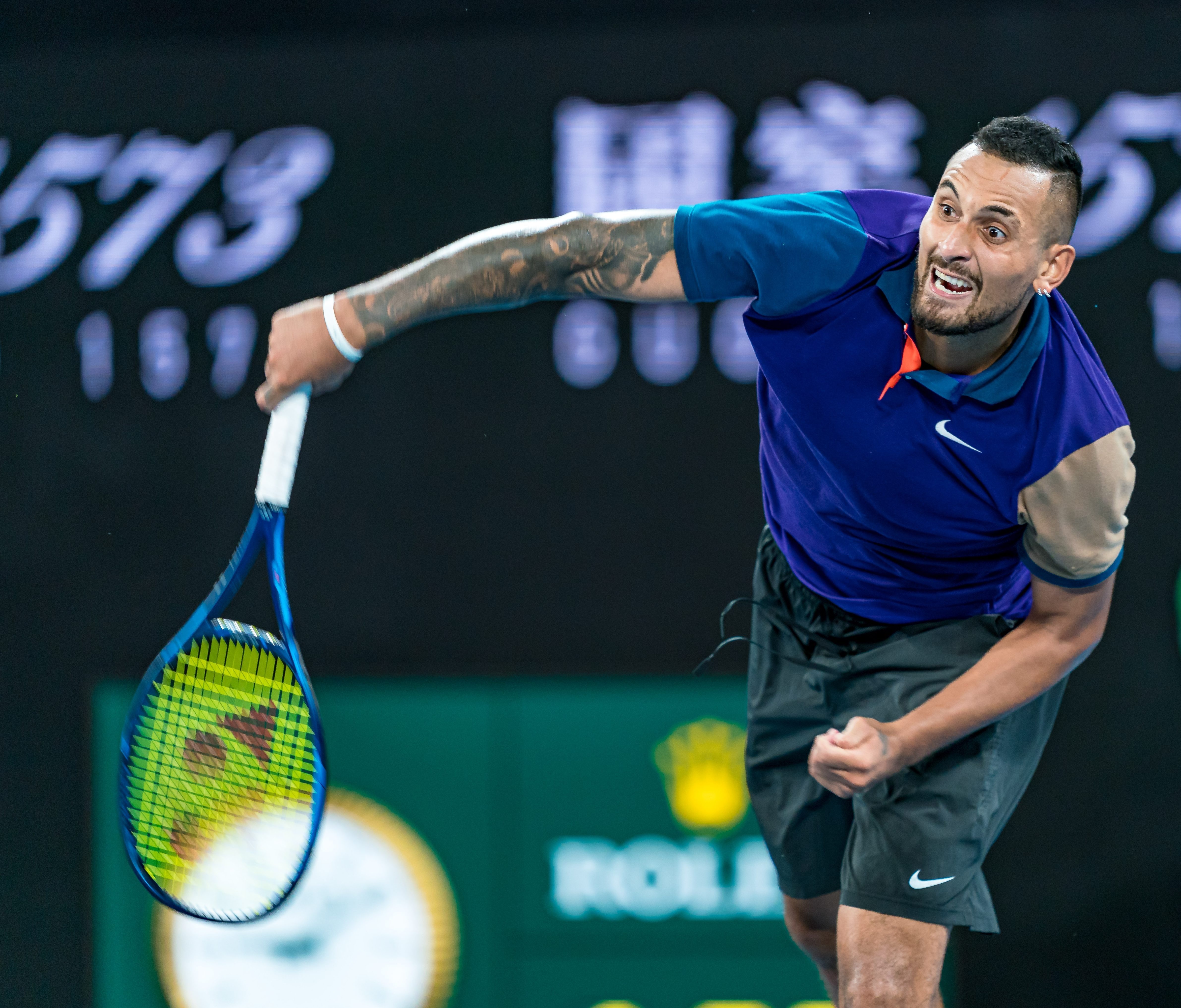 The Australian moved into the second round in Melbourne for the second successive yearCredit: Getty Images – Getty

“You outlet into people that you know have your back and you know that’s not gonna change.

“One person that, you know, a lot of people can kind of relate to just outbursts.

“You just need to verbalise it and lash out on someone sometimes. Then I calm down and started playing some decent tennis.”

Calm is not exactly the word to describe the relationship that exists between Kyrgios and the reigning men’s champion Djokovic.

On the eve of the Australian Open, Djokovic reignited his verbal feud with Kyrgios, saying: “Off the court, I don’t have much respect for him.”

Kyrgios has often used social media to attack the Serbian, the hostility increasing when Djokovic was caught on video dancing topless in a nightclub during his ill-fated Adria Tour.

Unfortunately someone that’s partying with his shirt off during a global pandemic, I don’t know if I can take any slack from that man. That’s as bad as it gets for me

Djokoic’s Eastern European tennis exhibition, which refused to acknowledge any form of social distancing, was abruptly cancelled when he, his wife and other players caught Covid-19.

Responding to the “no respect” comments, Kyrgios said: “I’m not quite sure how he can’t respect me off the court.

“I feel like I’ve gone about things extremely well, especially during the pandemic.

“I mean, driving around delivering food to people during the pandemic that didn’t or couldn’t get the supplies.

“I was extremely careful about what I was doing. I didn’t want to spread the virus to anyone.

“Now I’m actually trying to donate meal kits to people that need food. I have my foundation.

“He’s a very strange cat, Novak is. Heck of a tennis player.

“But unfortunately someone that’s partying with his shirt off during a global pandemic, I don’t know if I can take any slack from that man. That’s as bad as it gets for me.”