EMMA RADUCANU dropped her racket onto the court and looked absolutely astonished.

Swiss world no12 Belinda Bencic had smashed the ball into the net for one last time and the Brit teenager was in the US Open semi-finals after yet another stunning display in the Big Apple. 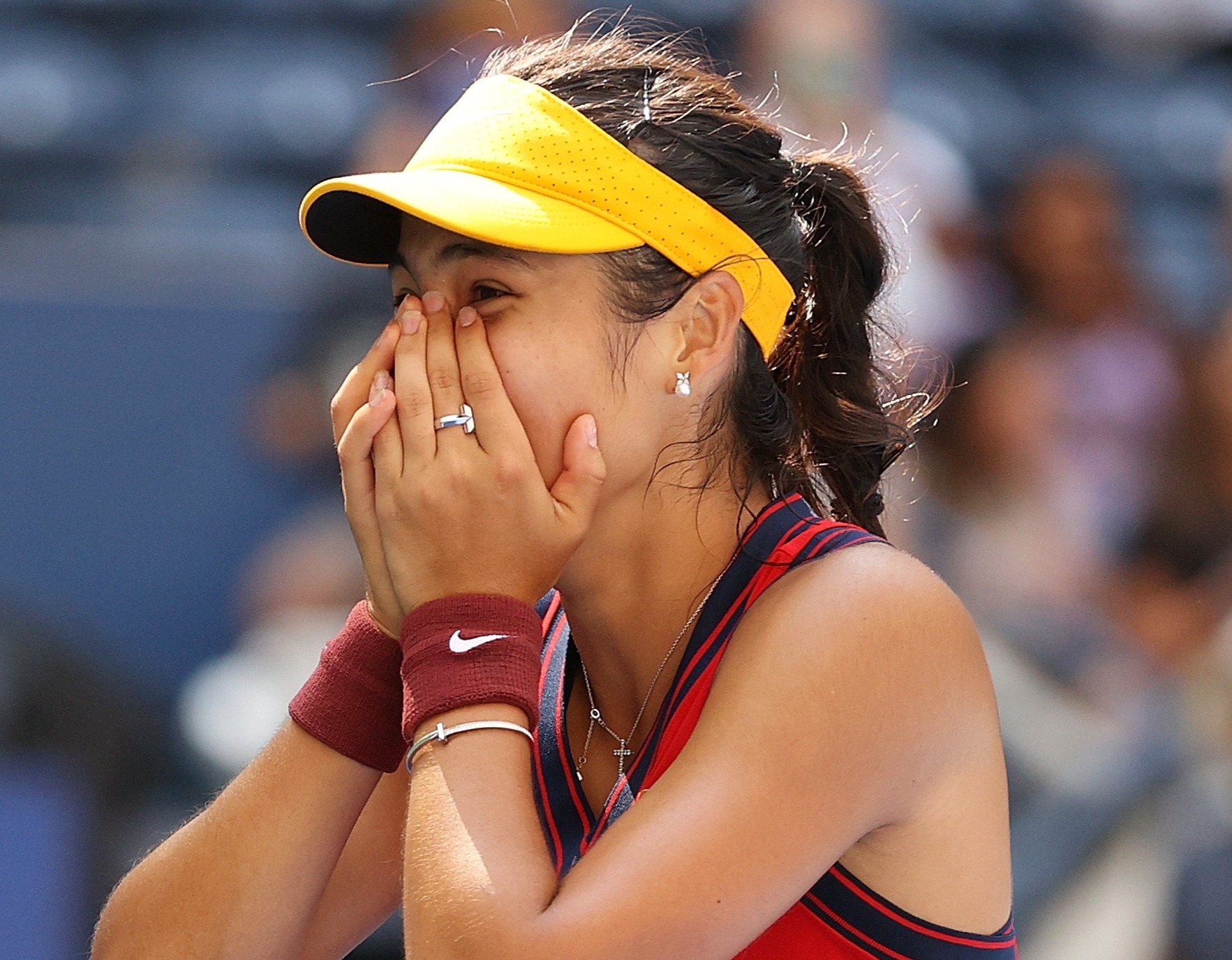 Raducanu put on a brilliant performance to reach her first ever Grand Slam semiCredit: Getty

The Kent star couldn’t believe what was happening. She wasn’t the only one.

In just her second Grand Slam appearance, Raducanu has not only come through qualifying but she now stands just one win away from Saturday’s final.

Bencic was supposed to be her toughest test yet, but the Brit recovered from her now standard shaky start to win 6-3 6-4 and set up a last four clash with either Karolina Pliskova or Greek Maria Sakkari – who were set to meet here on Wednesday night.

Raducanu said: “Of course, playing Belinda, she is such a great opponent and is in great form, she hits the ball so hard, I had to adjust and adapt and it was a really tough match. I am so happy to come through and thank you so much for all your support today.

“I have an absolutely amazing team, Will is keeping me in one piece, and I have a team back home who could not be here – I am sure they are watching, I hope!

“Thank you so much everyone, I wish you could be here with me but everything we have been working for has shown here.

“It was 0-30 in my last couple of service games so to hold was pretty big, it was one point at a time and trying to focus on what I can control – Belinda was going to fight to the end but I am really pleased to come through that.

“To have so many young players here doing so well shows how strong the next generation is – everyone is on their trajectory, so I am just here doing what I can control and it is my own journey.”

This was a massive step for Raducanu regardless of her brilliant performances here so far – and she passed it with flying colours.

Beating four top 50 players is something to be proud of but Bencic was touted as a different kettle of fish.

The Olympic champ is the world No 12 and although her major displays this year have been indifferent, her achievements in Tokyo – she won silver in the doubles – had set her up nicely for a tilt at glory in the Big Apple.

This was the first time in Raducanu’s short career she’s faced someone so highly ranked – and she dismantled her in quite stunning fashion.

What a run it’s been for a girl who only last month was sweating on A-level results rather than forehands and backhands.

Also remember because of the pandemic and a desire to finish her schooling, she barely played before Wimbledon earlier this summer.

Rival Lelyah Fernandez, the 19 year-old in the other semi-final, has been on the WTA tour for a while. Raducanu, meanwhile was ranked 361st in mid-June, as the level below the main tour was wiped out.

It clearly didn’t bother her as she now closes in on the top 50 in the world.

She’s the youngest Brit player to reach the last four of a Slam since Sue Barker at the French Open in 1975 and just the fifth woman in the Open era to get to this stage on her first appearance at a major.

The stat which really stands out, however, is that she’s just the fourth woman qualifier in history to reach the last four of one of the biggest tournaments on Earth. 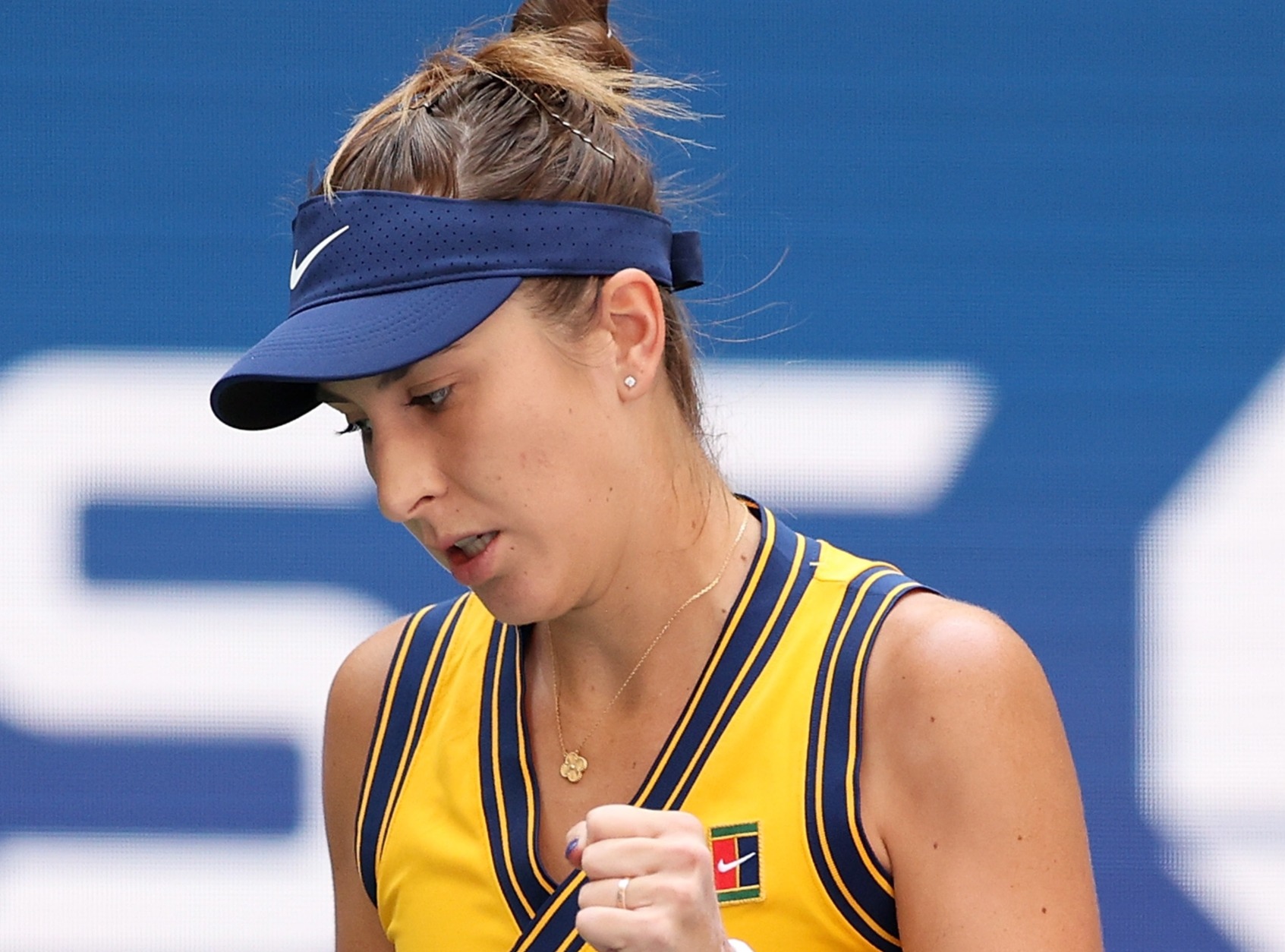 Bencic looked distraught as she crashed out of the tournamentCredit: Getty

Yes, she’s that good and to think she arrived in the last eight having not dropped a set and lost just 15 games –  the lowest total by any player in the first four rounds since Serena Williams in 2013.

Bencic also arrived at this point of the tournament having not lost a set either and she quickly took advantage of some nerves from the Brit and broke in the very first game.

The same happened in the previous round against American Shelby Rogers so this wasn’t time for panic stations.

The Swiss, who knows what it’s like to burst onto the scene as a teenage prospect, started confidently and was serving superbly but Raducanu found her feet and was able to get on the board for 2-1 in the first.

She was able to adjust to the speed coming off Bencic’s racket and a first break opportunity ended with the teenager shanking one off the frame and into the crowd.

But when the next chance came, Bencic netted and it was all square before a solid service game from Raducanu saw her edge ahead for the first time in what was becoming an increasingly equal contest. Her aggression on the Bencic serve was working a treat.

Suddenly it was Bencic who was a bag of nerves and a brilliant passing shot had Raducanu serving for the first set. From 3-1 down to 5-3 up in the blink of an eye and when the wobbling Swiss hit long, the first set was in the bag.

What a turnaround. Now to seal the deal.

Raducanu was far more solid at the start of the second compared to those opening exchanges and after another superb forehand winner set up the chance for a break, it was taken when Bencic double faulted for the fourth time.

The pressure on the Swiss was mounting and it was no surprise to see her smash her racket into the chair at the changeover. 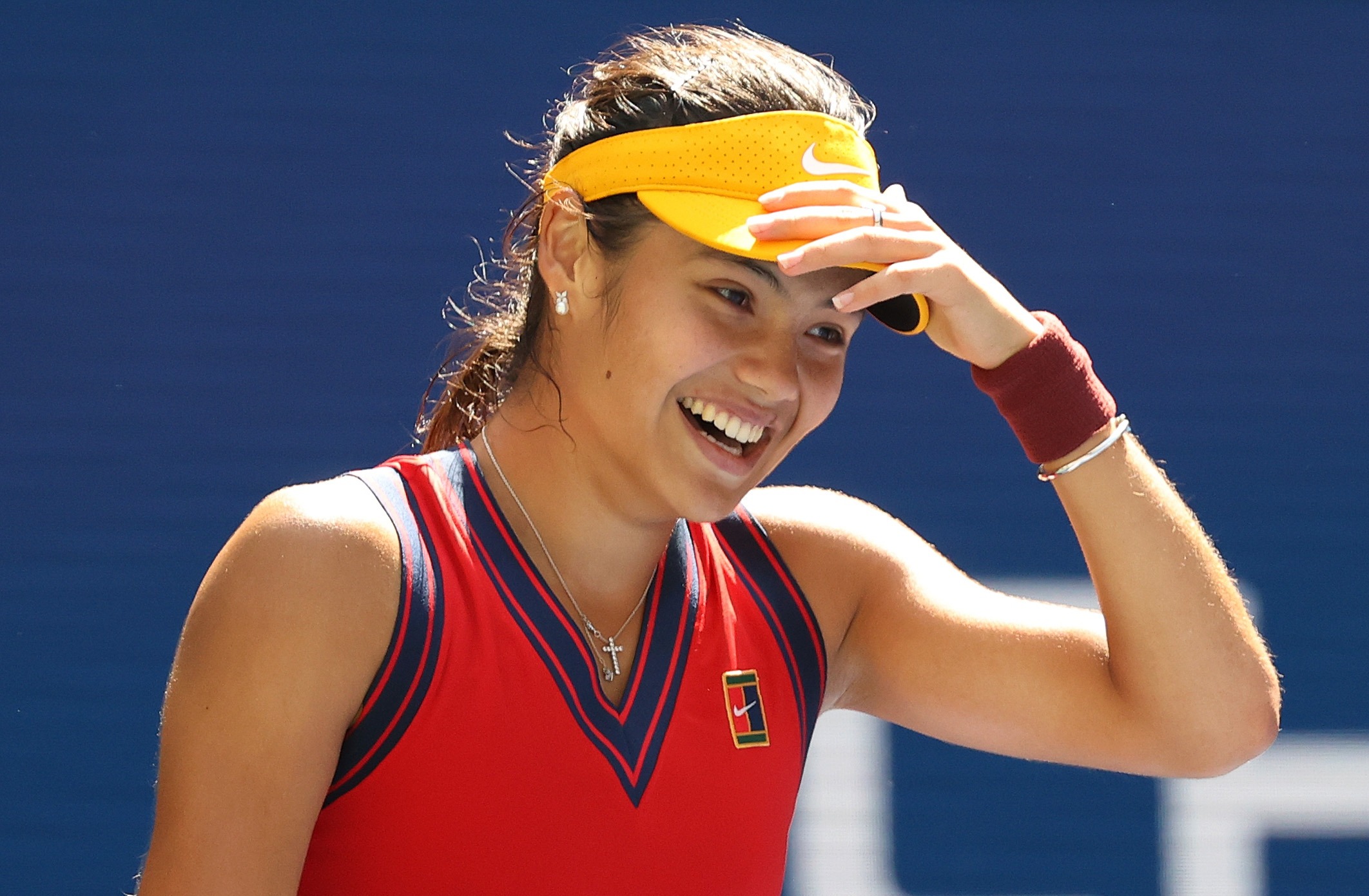 Raducanu is now the British No1 after her famous victoryCredit: Getty 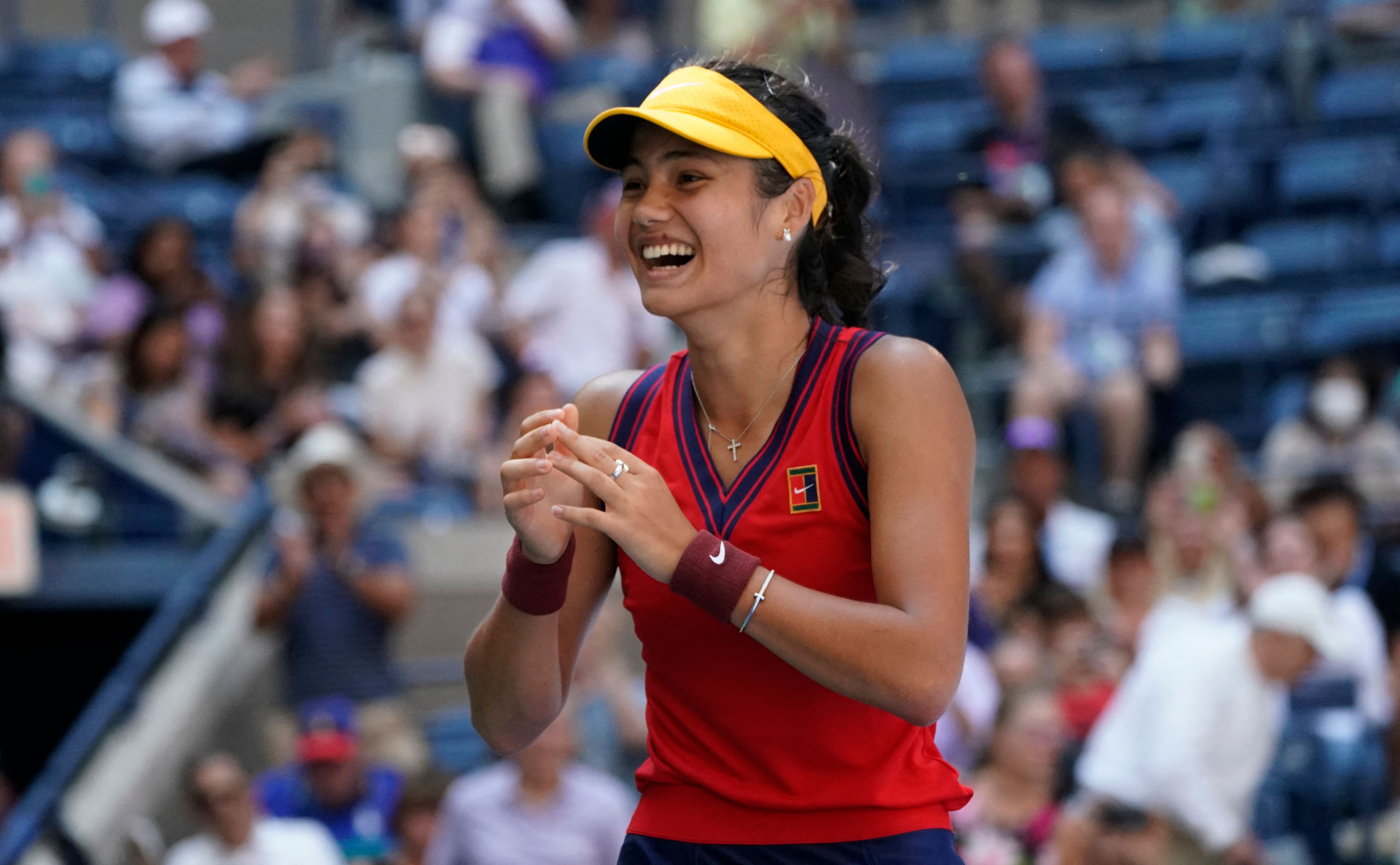 The teen has made history with an epic performance at the Arthur Ashe stadiumCredit: AFP

Raducanu, meanwhile, was skipping around the court without a care in the world. She was in complete control. It was her match to lose now.

A strong hold fired the Brit 5-3 ahead and within a game of continuing this most remarkable, stunning sporting fairytale.

Bencic held firm but now Raducanu had the chance to serve herself into the record books. Now it was her time to get the shakes. In a flash she was down 0-30. Yet you just cannot doubt this remarkable kid.

And when Bencic smashed into the net, it was over. For Raducanu, however, this is just the start of something very special indeed.

Celebs flooded online to praise her too.

“Emma Raducanu is the real deal. A tennis superstar in the making, so exciting to watch.”

Gary Lineker said: “What a performance. What a triumph. What a future.

“18 year old Emma Raducanu is through to the semifinals of the US Open. Stunning. Well played.”

Clare Balding rejoiced: “Wow wow wow. Emma Raducanu what a star you are. I watched with my lovely neighbours and have shouted myself hoarse.”

Gabby Logan added: “That was special, what a fantastic performance. She’s only gone and done it… into the semi finals of the US Open.”