Japan boasts a squad with exciting players that could cause problems for Spain and Germany and Costa Rica in Group E.

Japan has evolved in the last decades from a team that was basically formed by players active in their home country to an exporter of talent.

Having names in some of the biggest teams from Europe certainly makes Japan a different contender.

But this World Cup will be tough for them as Group E is no joke with Spain and Germany as favourites to progress to the Round of 16.

Japan is definitely strongest in the forward department in terms of depth.

At the same time, they’ve got plenty of decent options in midfield too.

With Itakura’s injury, they are slightly weaker at centre-back, while their starting full-backs are 32-year-old Sakai and 36-year-old Nagatomo.

Alongside captain Yoshida, aged 34, this makes for an experienced backline but also one that’s got a lot of mileage. 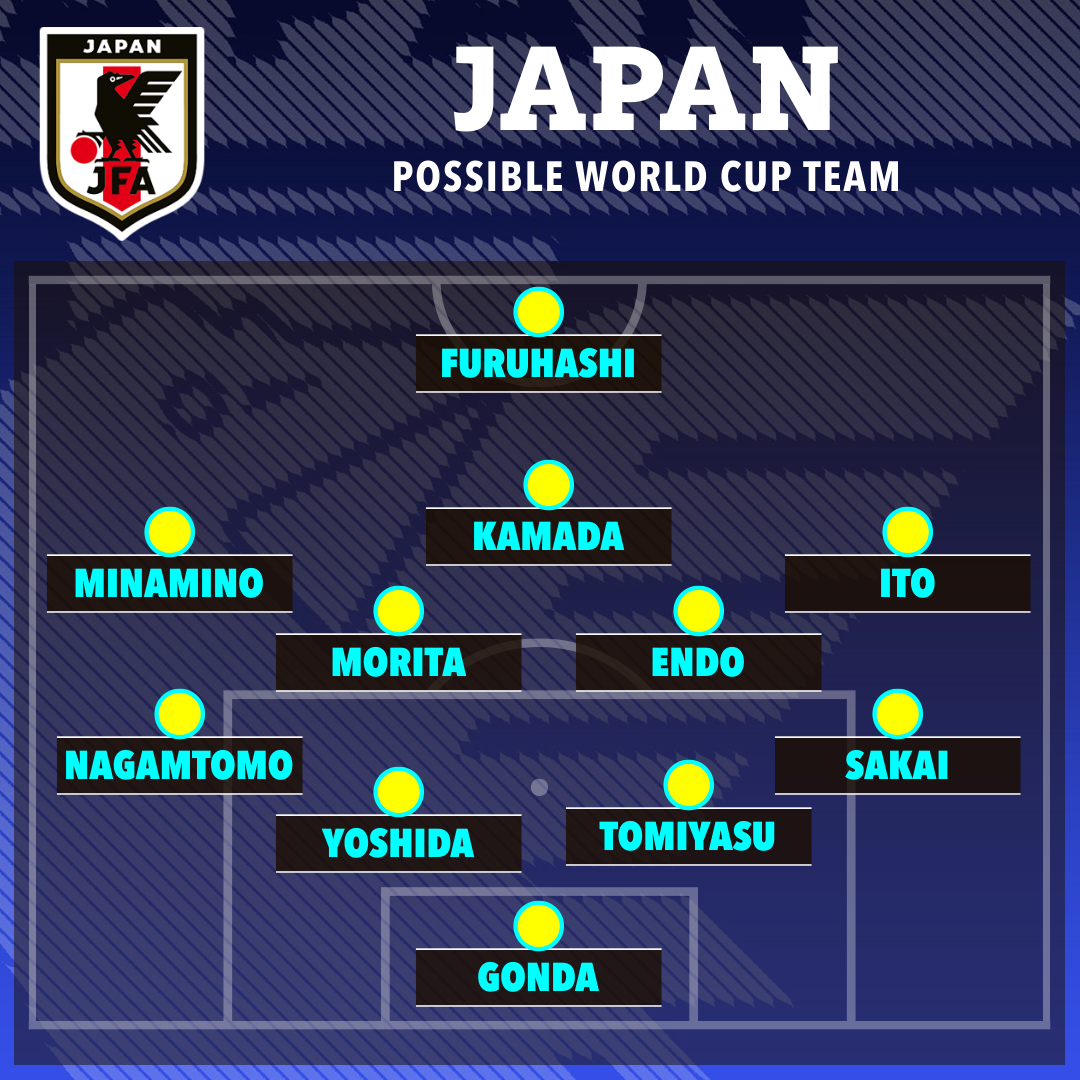 How Japan could play at the World Cup 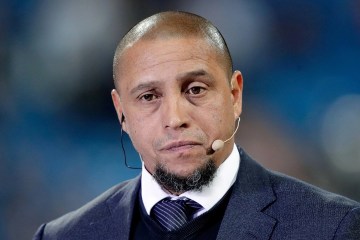 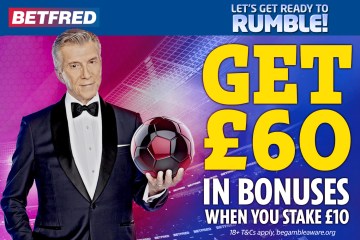 Japan has some interesting stats but lacks proper balance, like in terms of long passes per match compared with their upcoming opposition in the World Cup.

They thrive in transitions and if they can force opportunities to counter-attack against Spain and Germany, that’ll suit them and their playing style perfectly.

The figure below shows an example of Japan’s typical shape in the build-up phase. 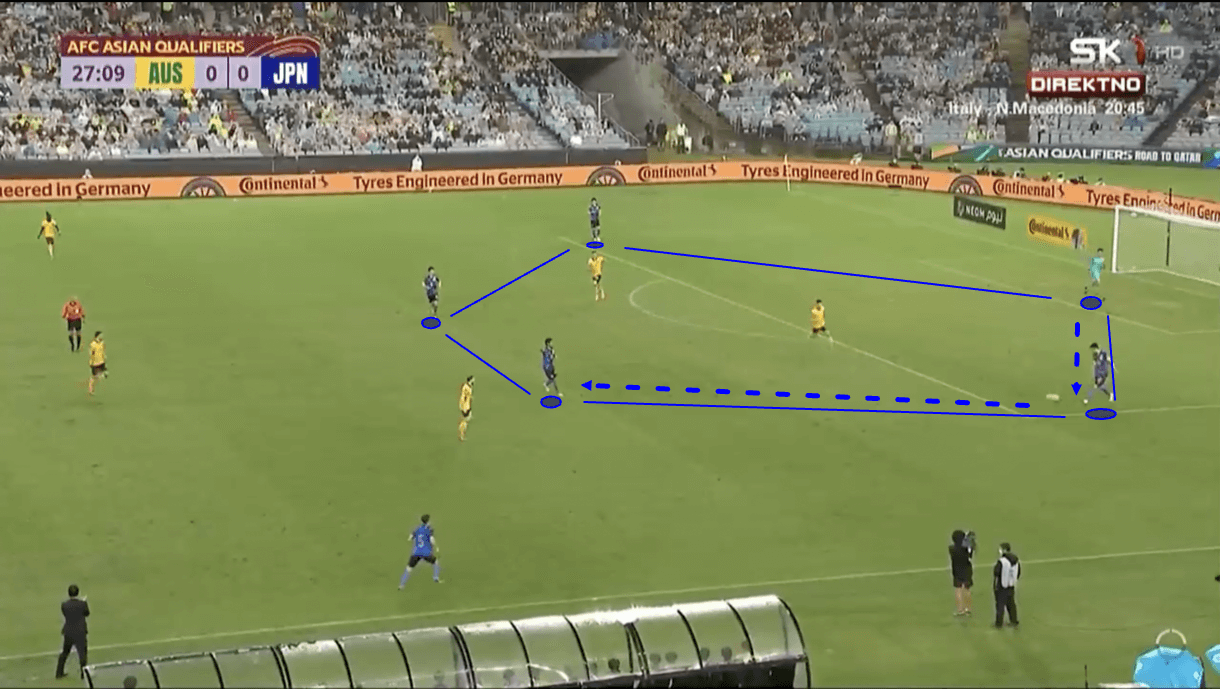 This is Japan’s typical shape in the build-up phase 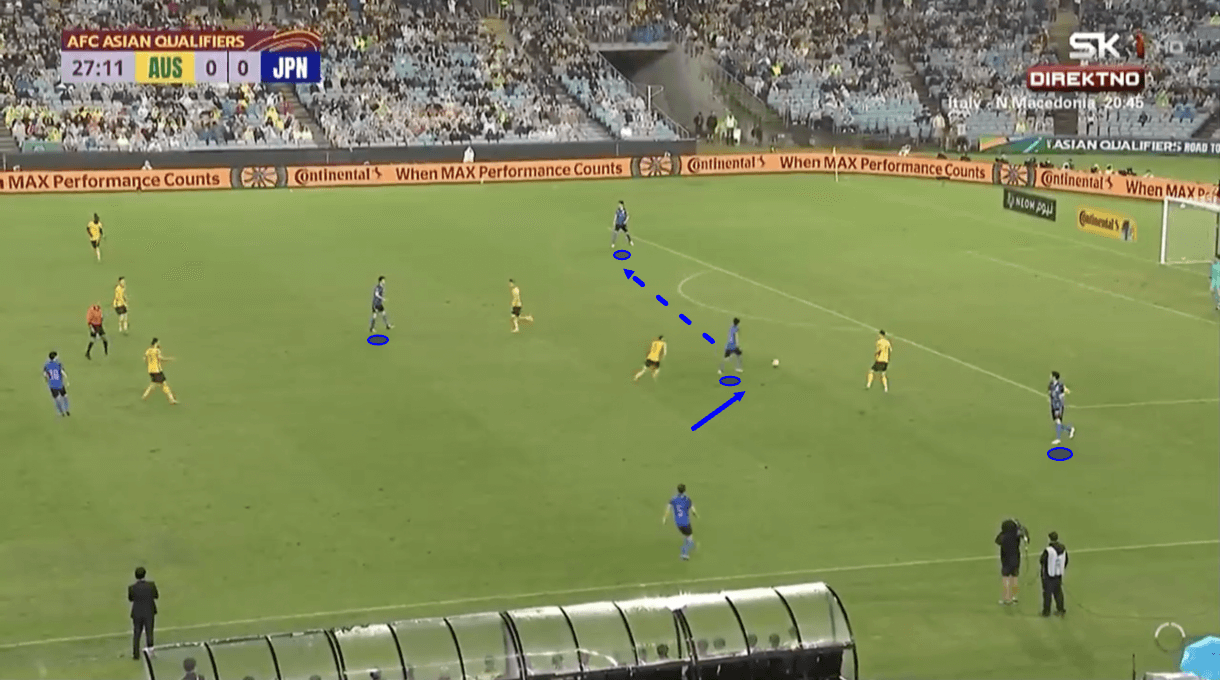 Japan’s defensive midfielder drops deep, while another plays higher up the pitch

During this phase and the ball progression phase, it’s common to see Japan’s holding midfield duo stagger (one drops deeper while the other sits higher) to give their teammates better passing options and make it more difficult for the opposition to mark them.

Japan are typically comfortable building out from the back via short passes.

They are extremely patient in the build-up and ball progression phases. 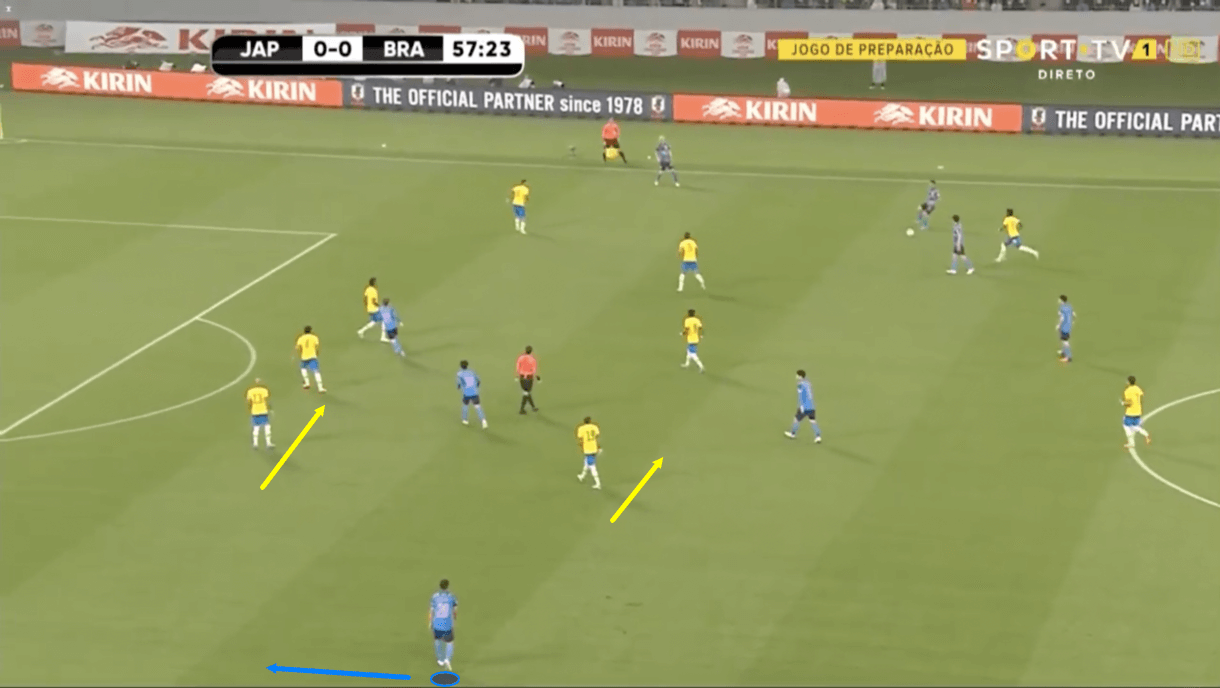 Japan has a tendency to overload one side of the pitch with all but one of their players positioned inside the opposition’s half.

Japan’s defensive skills have improved a lot in the last World Cups. That is a reflex of the development of football in Japan.

The figure above provides a couple of examples of how the Samurai Blue typically set up to defend in the high-block phase.

The first example shows how Japan’s 4-2-3-1 typically looks in this phase, with the front four typically orienting themselves more to the ball and the dangerous passing options near to their position in relation to where the ball is at that moment.

In the second example, we see how Japan’s deep midfielders defend in this phase a bit more.

These players will generally remain deeper focusing on defending in relation to their position. 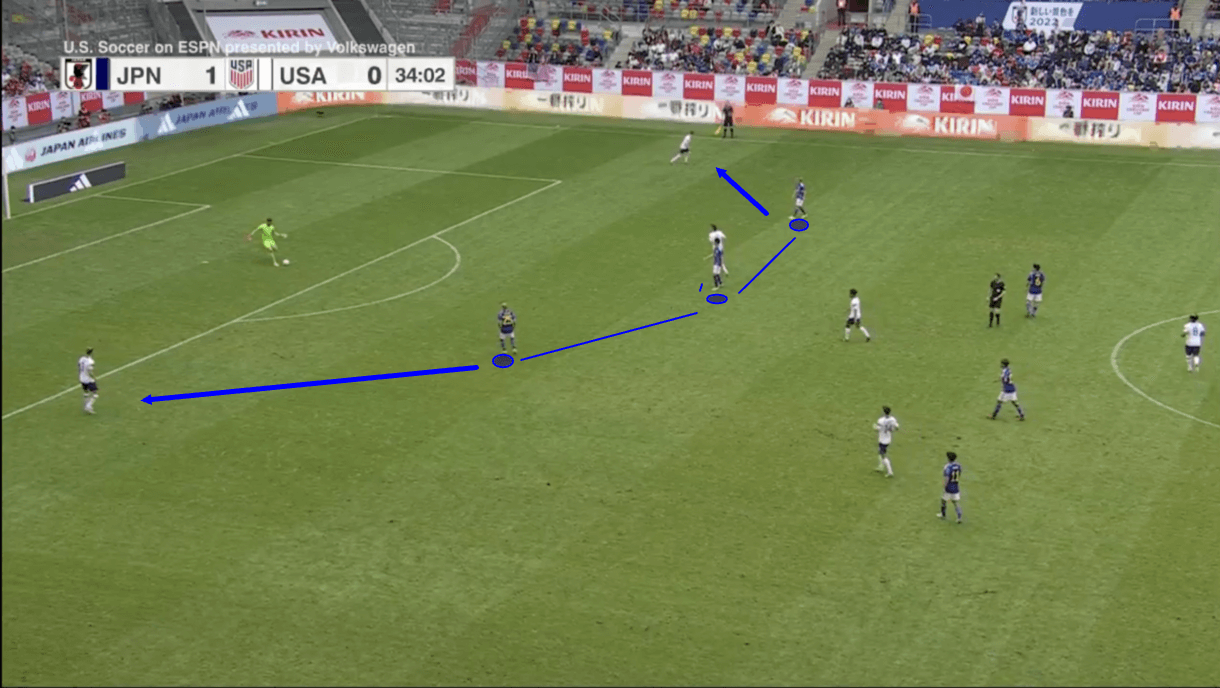 Japan’s midfielders will sit deep and focus on defending

Focusing solely on Japan’s forwards for a moment, they will sit narrow in the high-block phase. 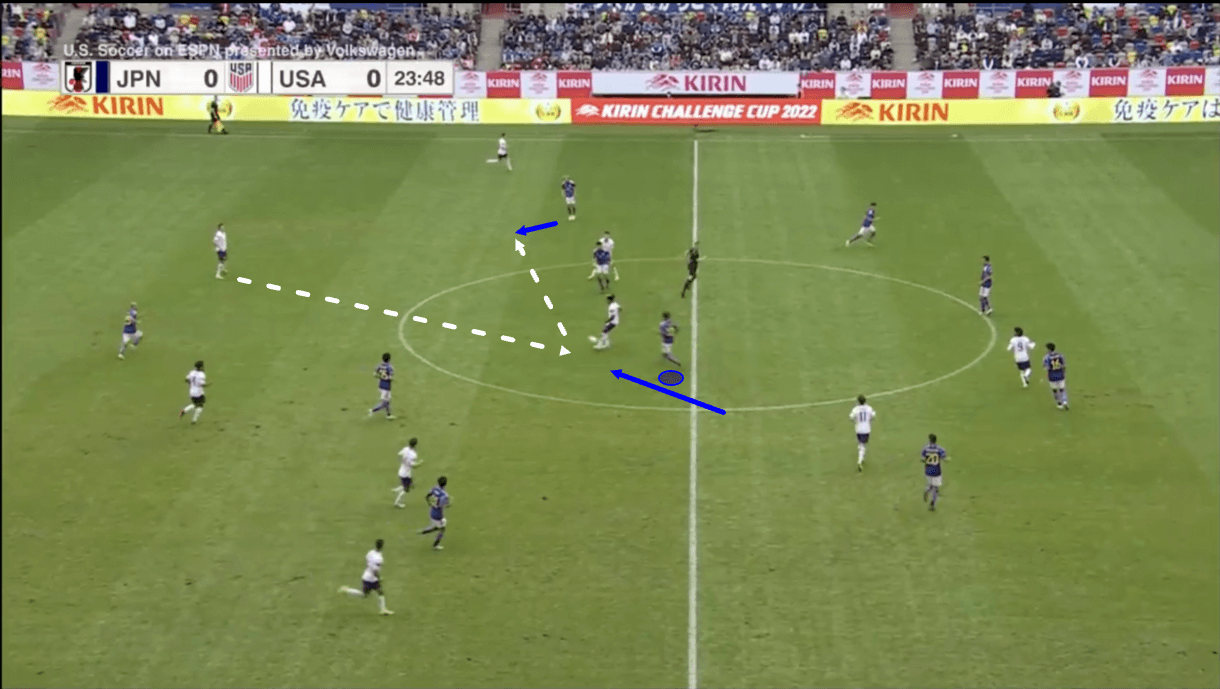 While Japan’s forward sit narrowly in a high-block

It’s common to see Japan’s midfielders applying aggressive pressure from behind to the opposition receivers. 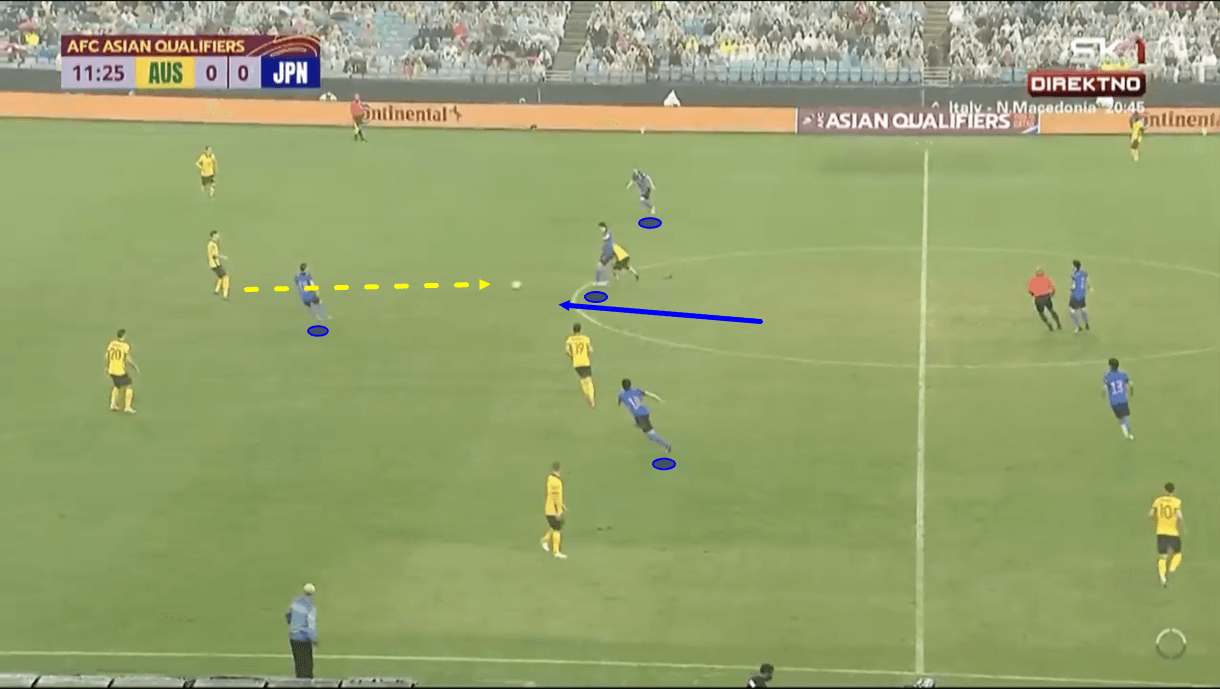 The midfield applies aggressive pressure to opposition receivers of the ball

If they foresee the incoming pass early enough, Japan midfielders can intercept the ball themselves. 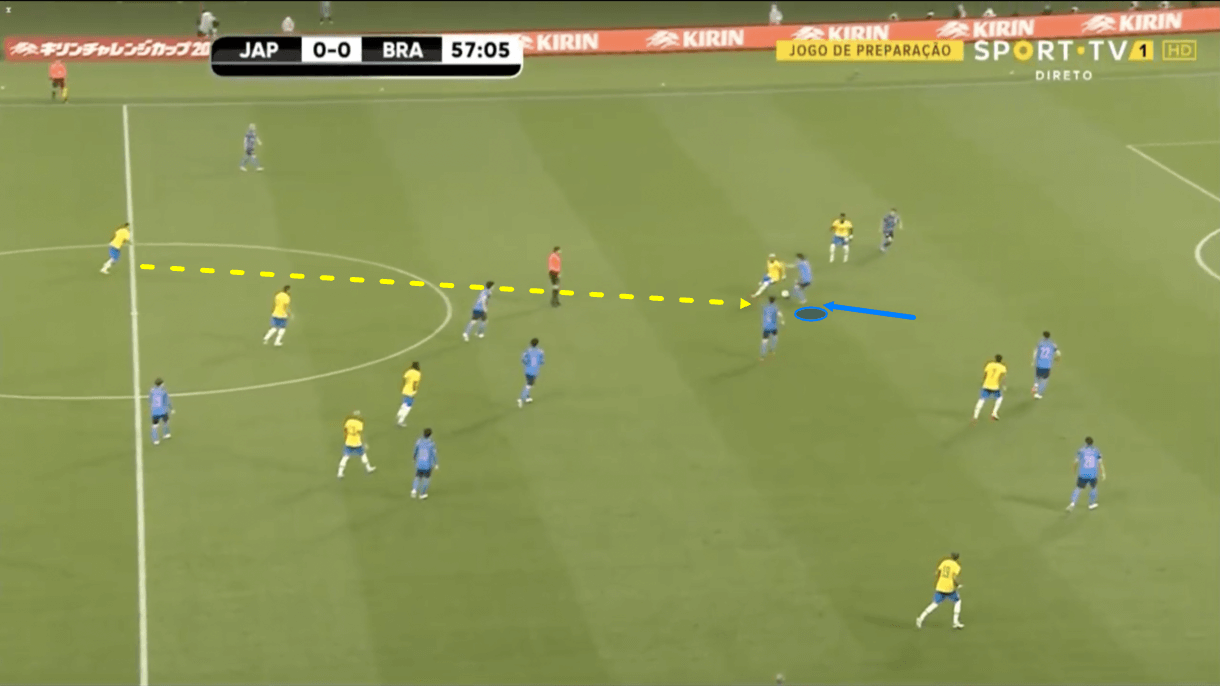 Often, this can lead to interceptions

It’s not just Japan’s midfielders who press like this, we also see their defenders jump out from the backline and press aggressively. 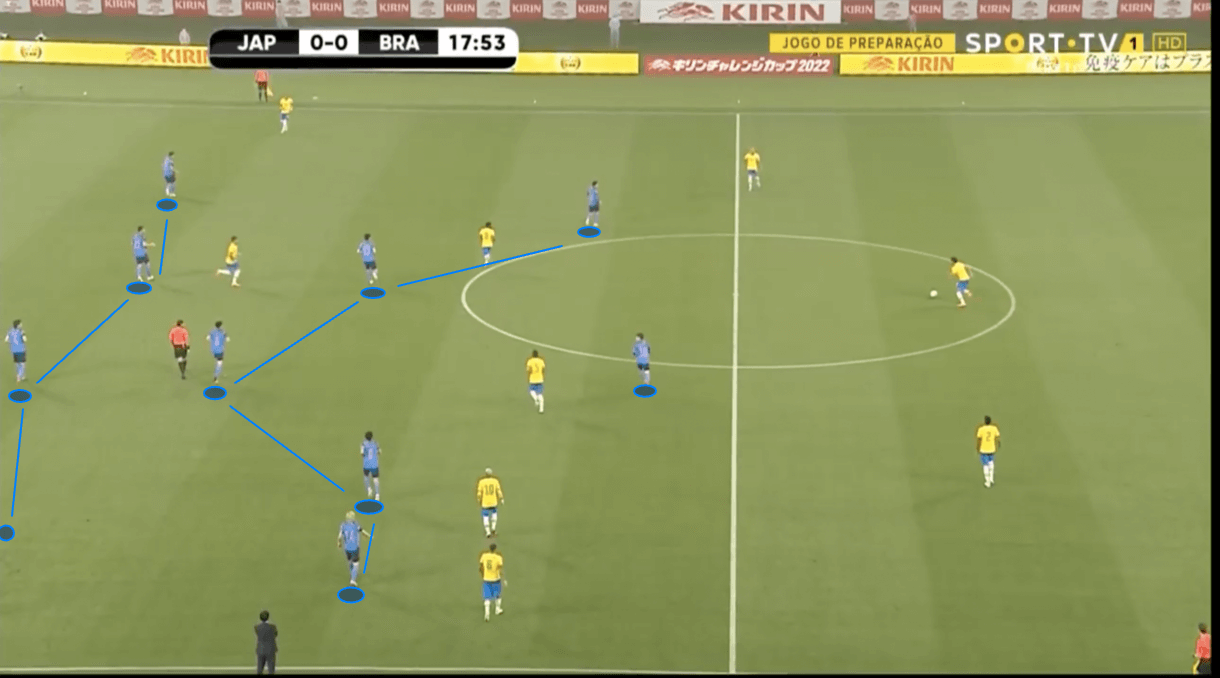 Their defensive shape resembles a 4-5-1 formatio

When defending deeper, as the opposition settle into a period of possession, it’s common to see Japan use something of a 4-5-1 shape, as seen above.

Below we can see Japan focusing on their counterpressing efforts. 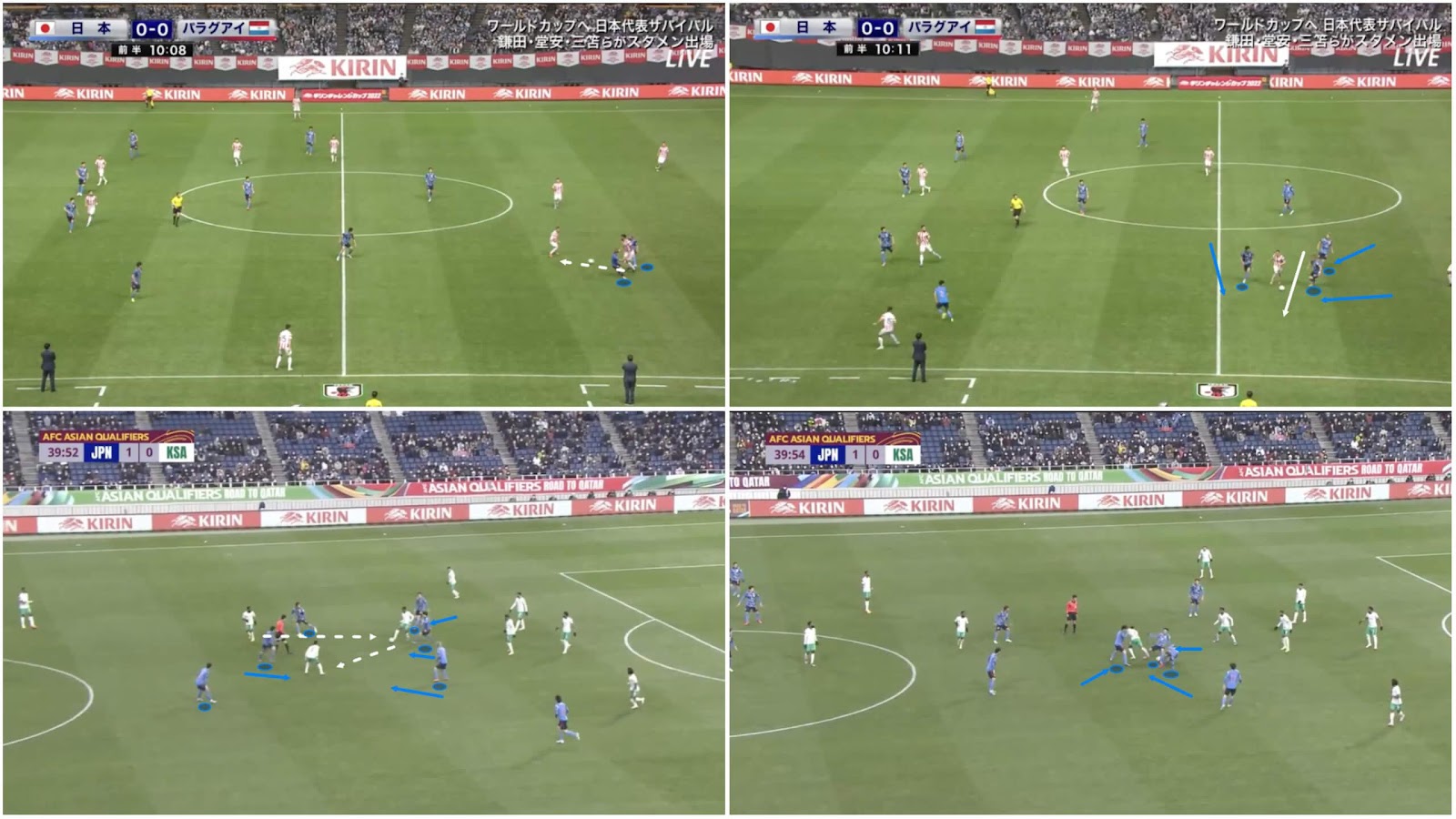 We see two examples of Japan’s counterpressing in this image.

What’s key for Japan’s counterpressing is that their centre-forward/wingers track back and continue applying pressure to the ball carrier even after they progress beyond their line.

This leads to the opposition ball carrier getting overwhelmed with energetic Japan shirts all around him, leading to the turnover.

Furuhashi, Maeda and Ueda are all performing well at club level but have not exactly replicated that at international level thus far.

Mitoma is a very different case in that he’s largely produced more at international level of late than he has at club level.

Ito was a revelation for Genk in Belgium and has started life in Ligue 1 with Reims positively, though in a different more central role than the right-winger role he perfected with Genk.

Endo and Morita have been a common sight at holding midfield for Japan during Moriyasu’s tenure, they perform the roles expected of them well and we’d expect to see the partnership feature in Qatar.

Reliability on the ball, press resistance, intelligent decision-making and good positioning without the ball will be crucial for this area.

Meanwhile, Kamada is a very well-rounded midfielder who can create opportunities from a slightly more advanced position. His bravery in possession and ability to break lines via his passing to set up dangerous goalscoring opportunities make him a very valuable option.

Meanwhile, Haraguchi will likely be the intended backup for Kamada (though Kubo could nudge him out for that role either) and, again, offers plenty of versatility to Moriyasu, so could even fill in for other areas if required, though that will be unlikely.

He lacks the passing quality of Kamada which could be an issue in terms of a starting place but, at the same time, offers better ball-carrying ability, so will be a useful option.

As for the defenders, our predicted back-four includes three very experienced options in Yuto Nagatomo, Maya Yoshida and Hiroko Sakai, while we’ve also got Arsenal’s Takehiro Tomiyasu in our starting XI at the right centre-back position, adding some youth to the backline.

Should Itakura remain out of action, we predict that Tomiyasu will be a very important member of this squad both for what he brings to the table in terms of profile and ability, as well as his positional versatility.

Japan’s defensive depth is an area of concern, which may be somewhat evident from our last defensive selection, Ayumu Seko, who’s never made an international appearance.

The World Cup is some place to potentially make your international debut, but Seko could be the best option of what’s available outside of the aforementioned players based on what the former J-League rookie of the year has shown with Grasshoppers of late.

We’ve gone for Kamada as Japan’s ‘key player’ for the tournament.

The main area to focus on with Kamada, as mentioned previously, is his passing.

He performs a relatively high number of forward passes, progressive passes and passes to the final third which makes him a key man for Japan and their preferred playing style.

If Moriyasu’s men can find Kamada in space in front of the opposition’s defensive line with runners ahead of him, particularly during a period of transition, that will spell trouble for the opposition as the playmaker possesses excellent ability to create chances from those situations.

Japan has evolved in the last World Cup and other international tournaments. However, Spain and Germany remain far more likely to progress to the Round of 16.

However, the Japanese still have more chances of making it to the eight finals compared with Costa Rica.

Time will tell if they have evolved enough to beat a European team on their quest to qualify to the knockout phase of the World Cup.

For even more detailed analysis of all 32 teams in the FIFA World Cup 2022, download your copy of the November Total Football Analysis magazine here