FORGET the seven wonders of the world, these stadiums have to be seen to be believed.

Although slightly whacky and weird, they prove football can really be played anywhere. 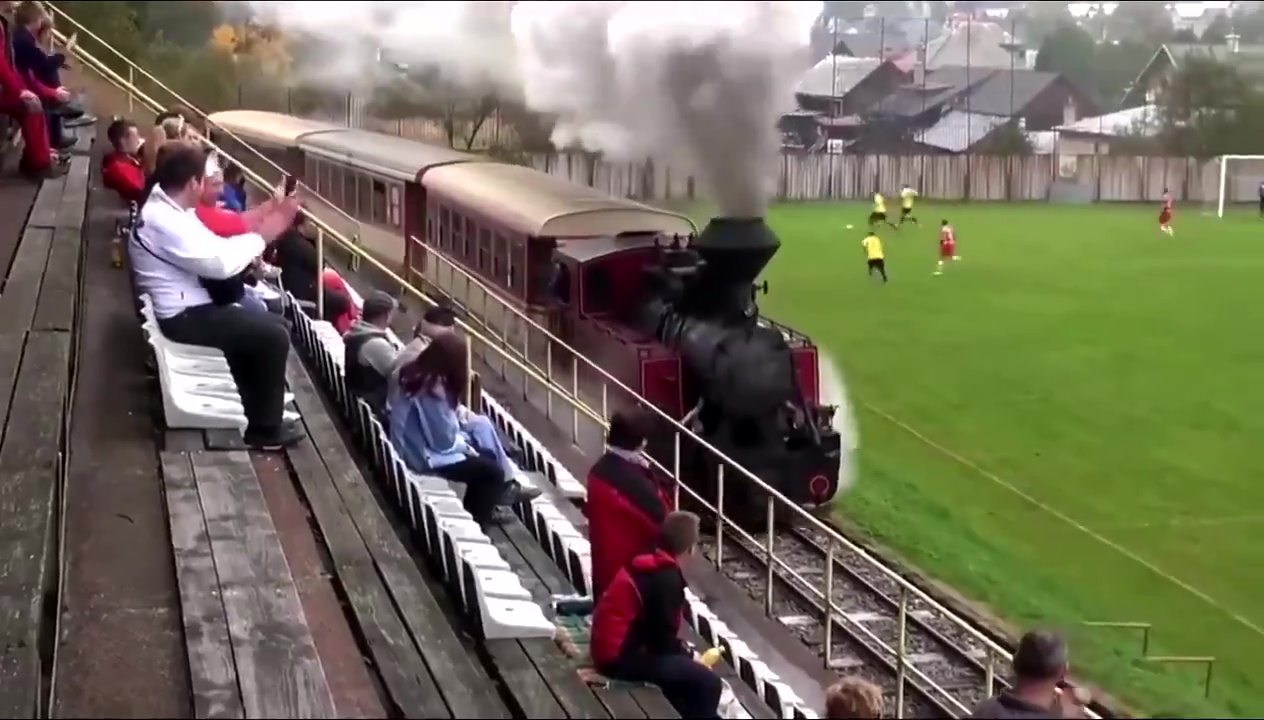 Even 12,000 feet above sea level in Bolivia or on a floating bay in Singapore!

And as Slovakian minnows Tartan Cierny Balog have proved – by having a steam train blocking spectators’ views as it passes past the stand – anything goes.

In La Paz, Bolivia the Estadio Hernando Siles is the home of football for the national team, as well as rivals Club Bolivar and The Strongest.

It’s also a notoriously difficult place for opposition because of its location – being 11,932 feet above sea level.

Therefore, the air is so thin you’ll literally find it impossible to catch your breath.

Famously, Lionel Messi vomited on the pitch during a World Cup qualifier between Bolivia and Argentina at the stadium in 2013 – suffering with altitude sickness.

In 2017, Neymar shared a picture on social media wearing an oxygen mask and saying it was “inhumane” to play football in such conditions. 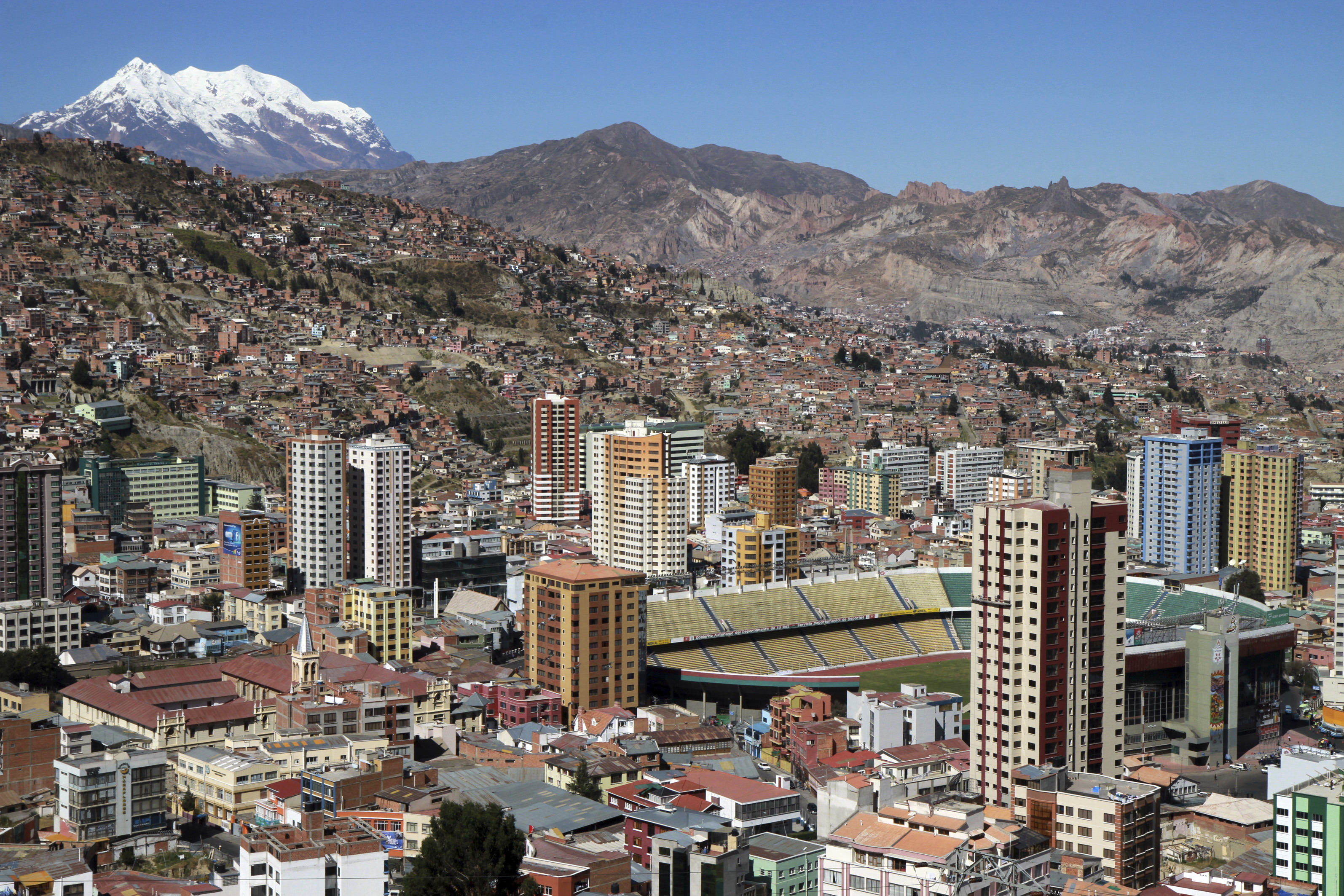 A quick glance at the home of FK Voždovac Belgrad, and it appears there’s nothing spectacular about this 5,200 venue.

That is until you realise it is on the roof of a shopping centre in Belgrade.

Built in 2012, underneath the stadium is a McDonald’s, KFC, as well as a supermarket.

And, incredibly enough, it complies with Uefa’s entry regulations for teams that qualify for the Europa League and Champions League. 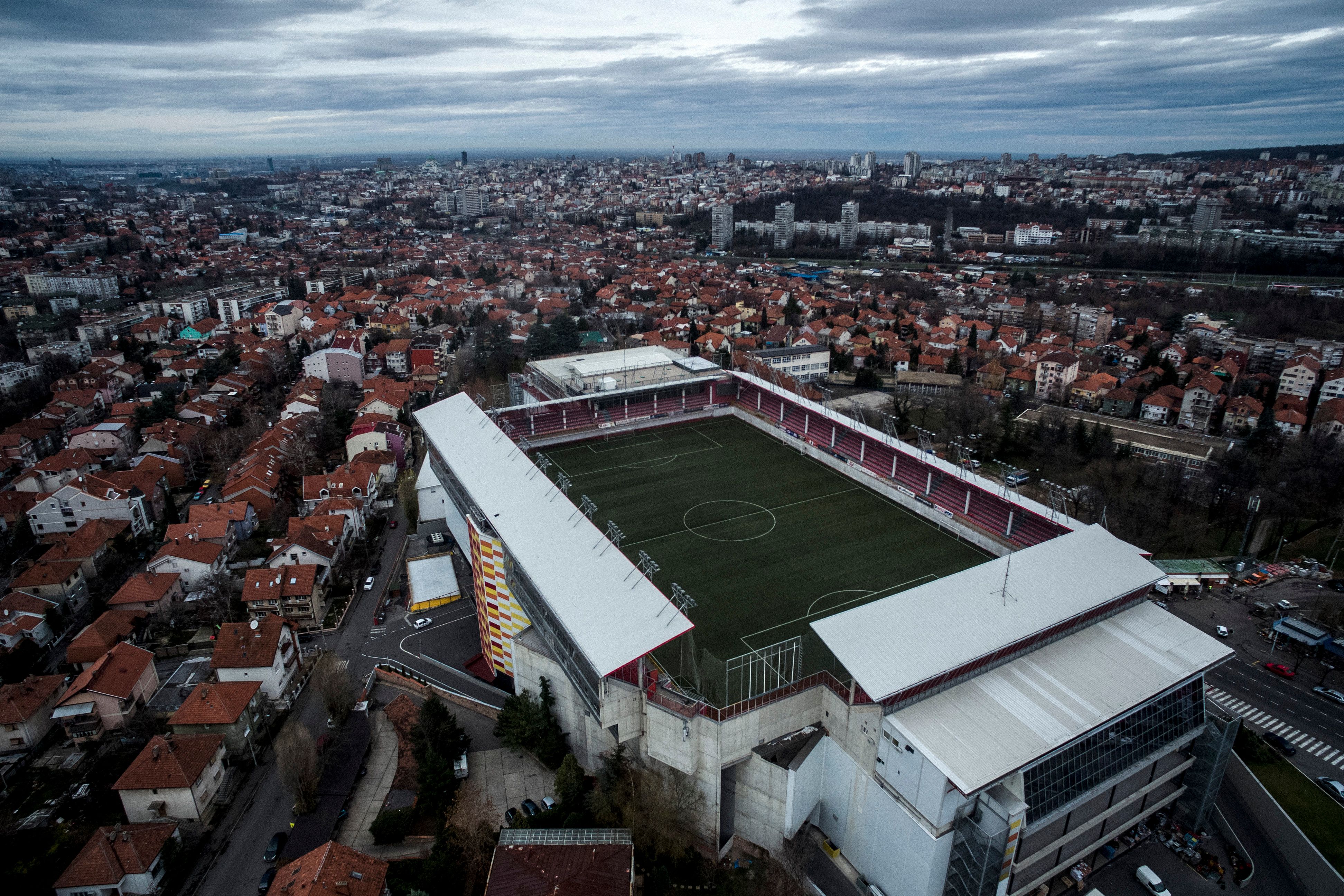 Stadion Vozdovac in Belgrade is on top of a shopping centreCredit: AFP – Getty

The home of Portuguese side Braga, it was carved out of the Monte Castro quarry ahead of Euro 2004. Basically, it’s on a cliff!

Arsenal found it a tricky place to go, losing 2-0 in the Champions League in 2011.

It is a stunning sight, and both stands are connected to each other by steel strings above the pitch. 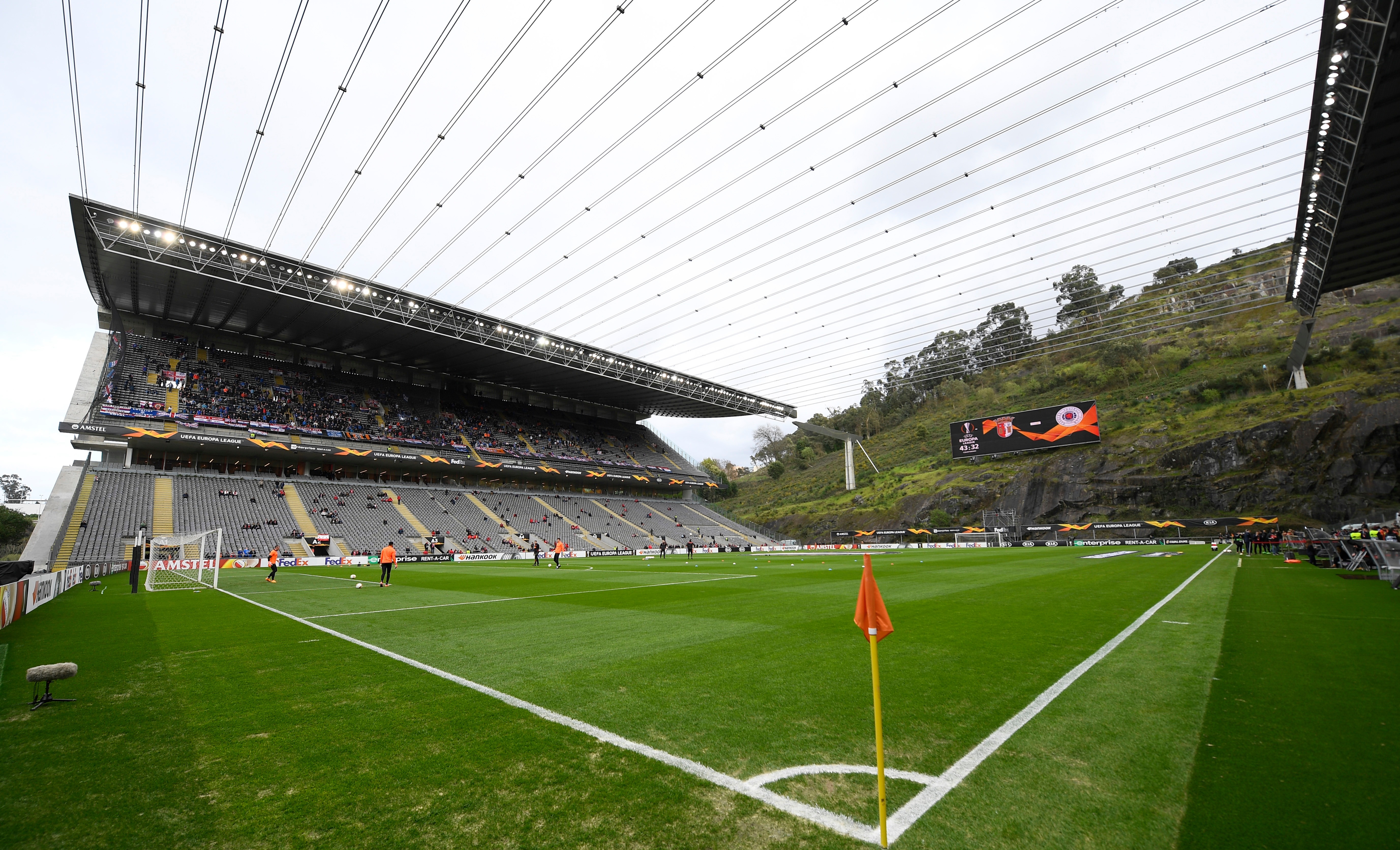 Portuguese side Braga’s home was carved out of the Monte Castro quarry ahead of Euro 2004Credit: Getty Images – Getty

Now this IS the highest place to play football in the world.

The home of part-timers FC Gspon, fans can enjoy the idyllic surroundings of the Swiss mountains, if the football isn’t of the quality you’d want.

But getting there is a bit of a mission.

Because it is to high to reach by car, you have to go to the nearby village of Stalden and get a cable car. 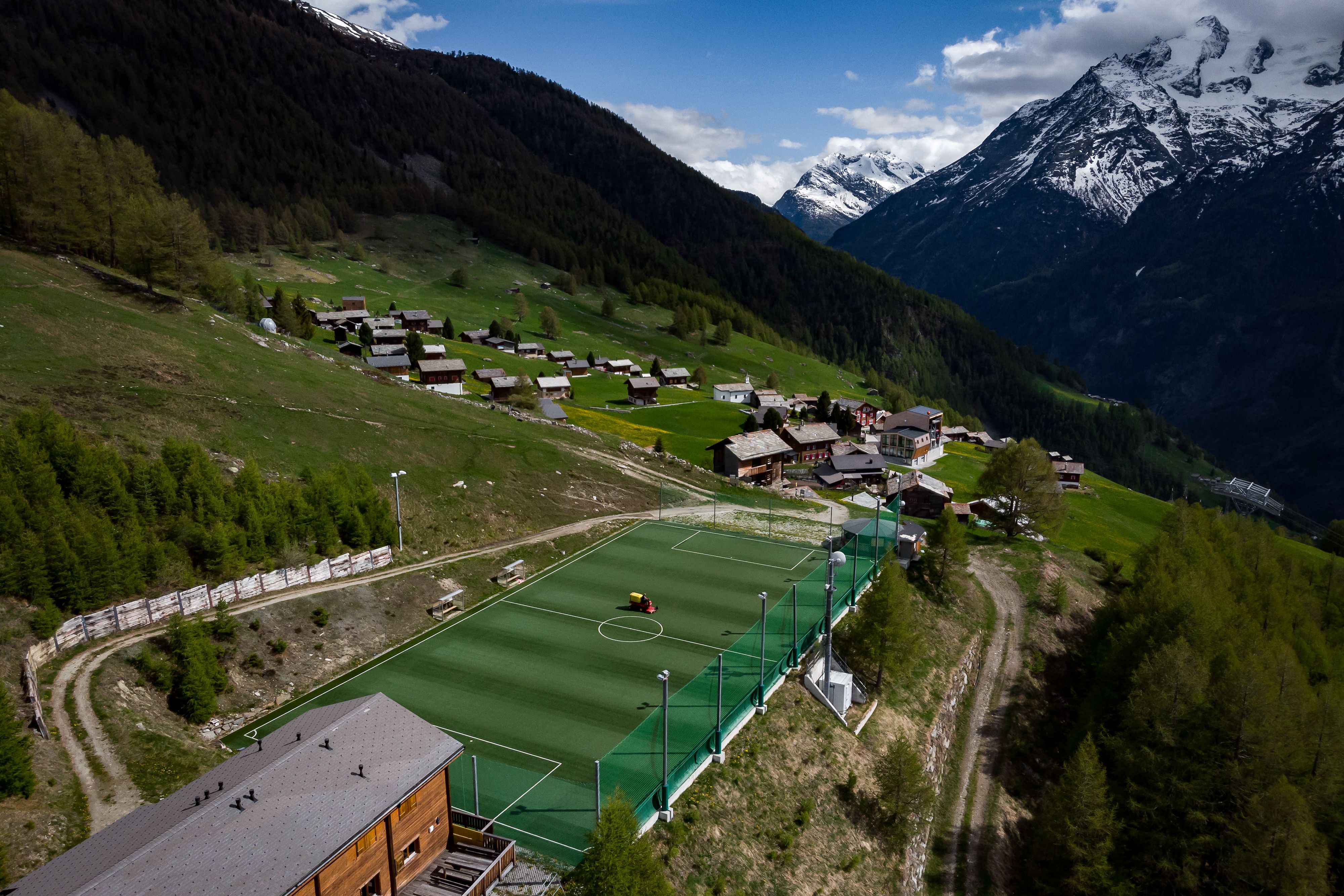 The Ottmar Hitzfeld Gspon Arena is the highest stadium in the worldCredit: AFP – Getty 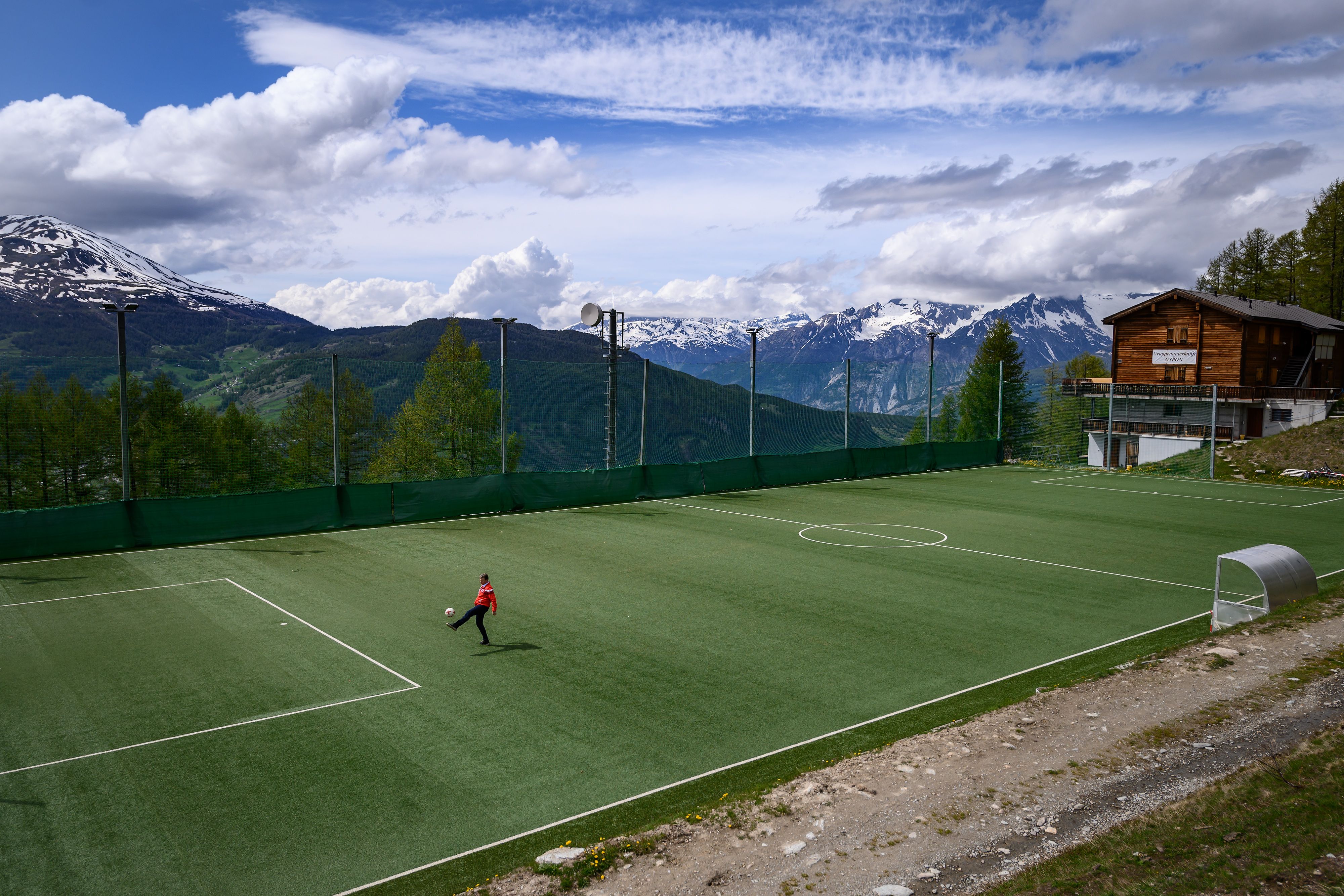 Croatia is a beautiful country, full of history, with an excellent international side.

They are unique 15 century fortresses, with the tower of St. Marco behind one goal and Kamerlengo Castle behind the other.

HNK Trogir have been fan-owned, but play at non-league level. Clearly, their home isn’t quite the fortress it looks! 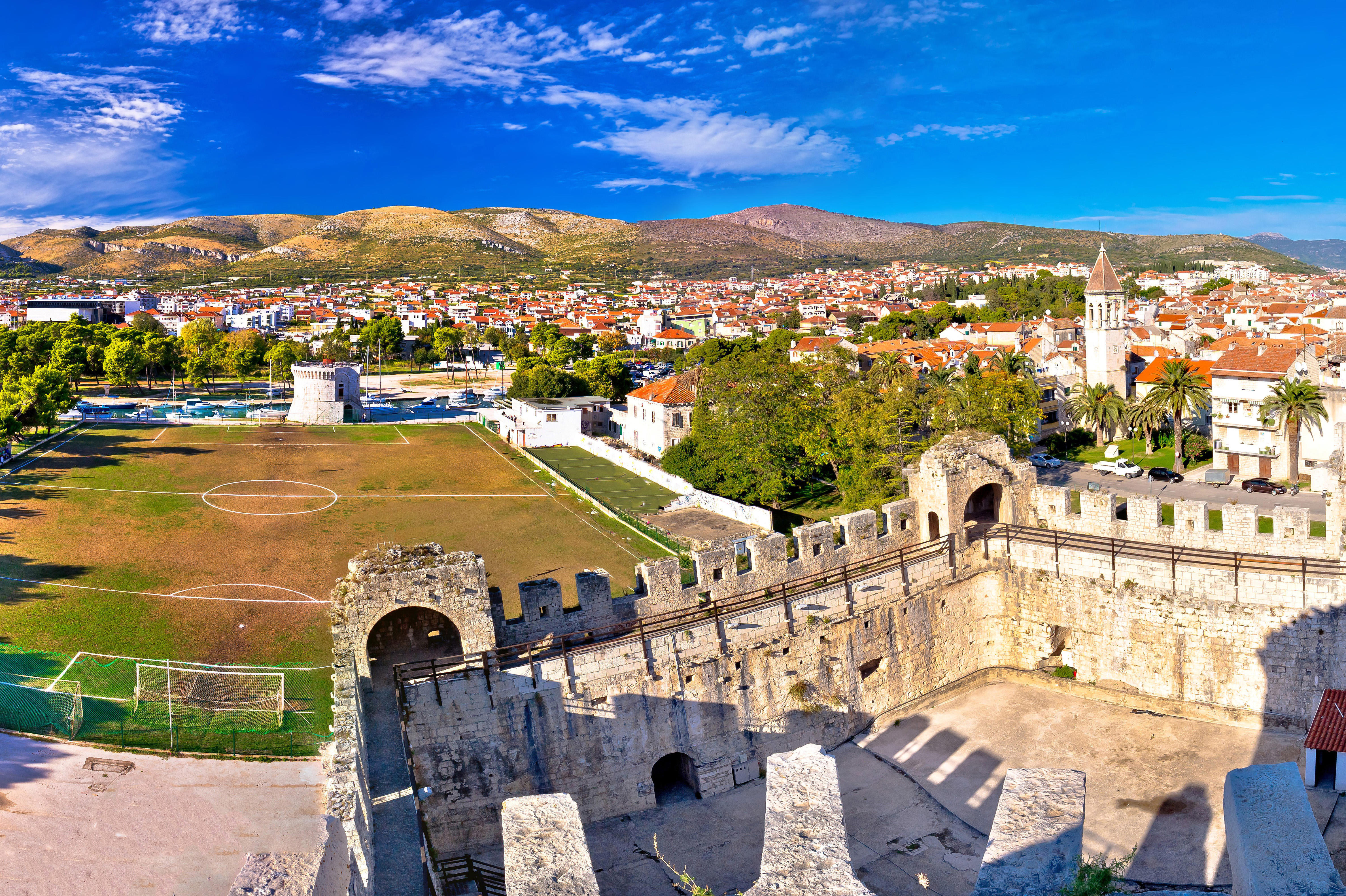 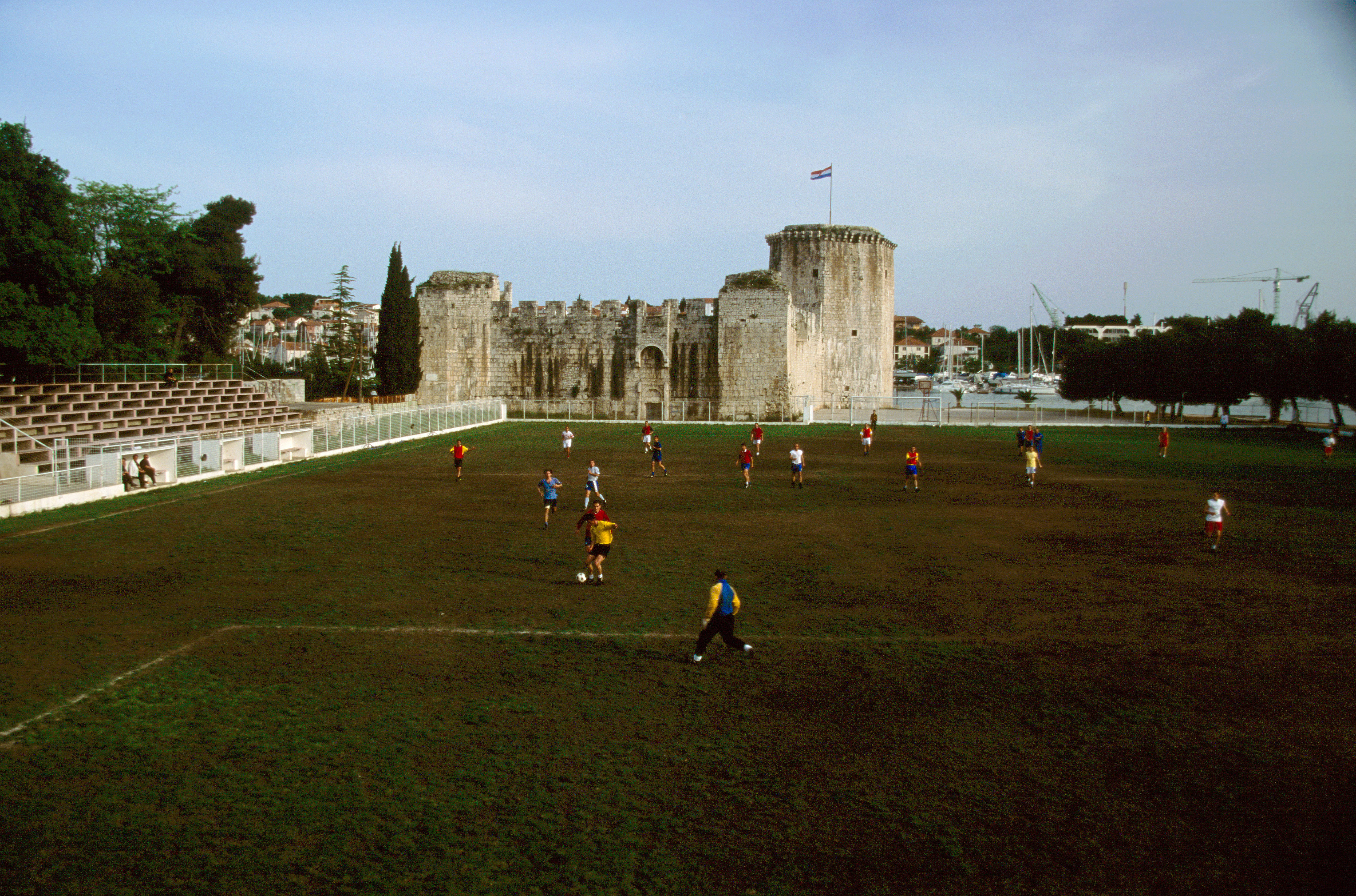 The tower of St. Marco is behind one goal and Kamerlengo Castle behind the otherCredit: Alamy

Found in Totfir, an island in the Faroe Islands with a population of around 800 folk, the Svangaskarð strangely has a capacity for 6,000 spectators.

It used to be the home of the national team, where a famous win was recorded against Malta in 1998, but they’ve since moved to a stadium in Tórsvøllur.

This one, though, is surrounded by green hills and offers view of a stunning blue lake. 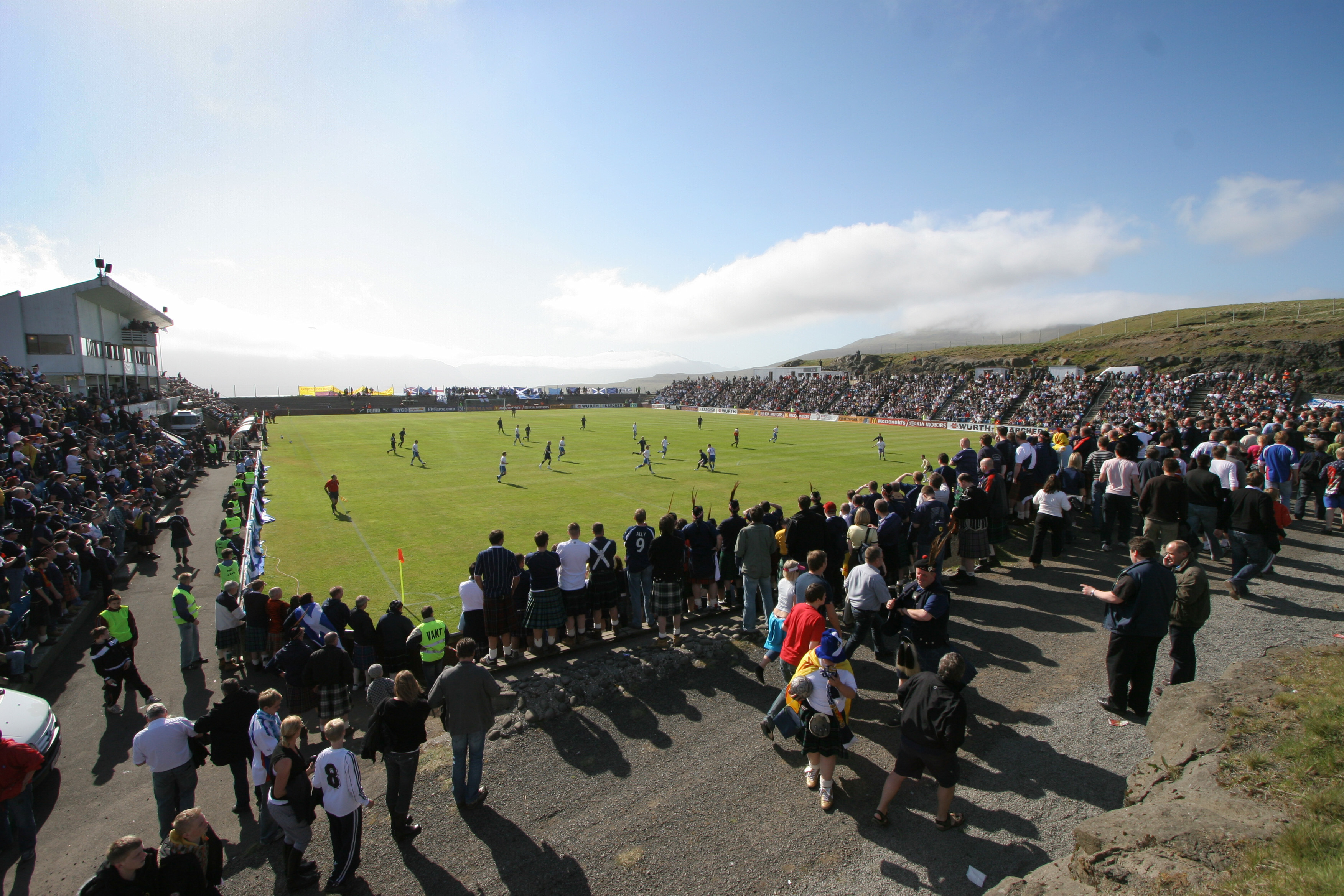 The Svangaskarð used to be the home of the Faroe Islands national teamCredit: Getty Images – Getty 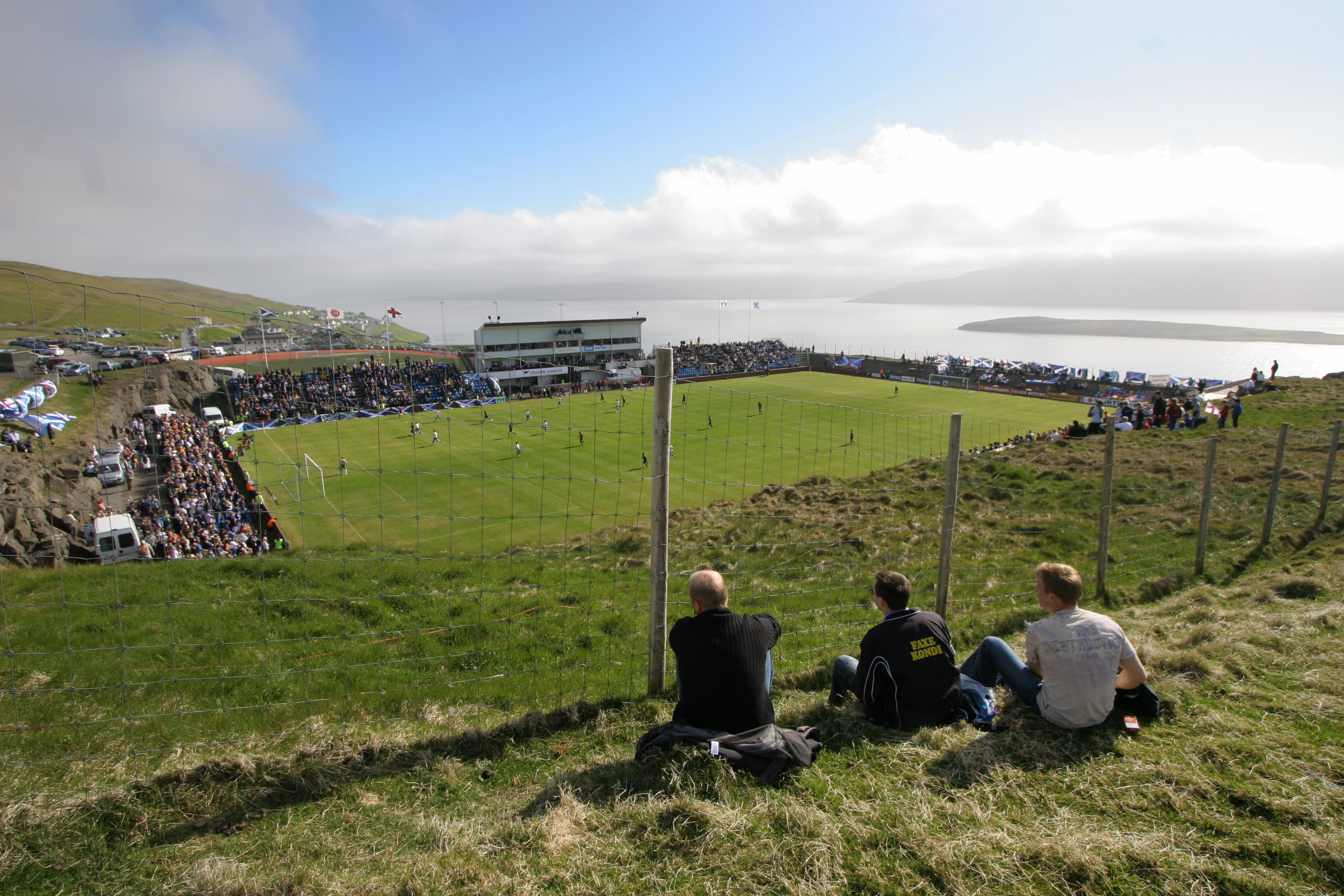 It is surrounded by green hills and blue lakesCredit: Getty Images – Getty

With its location near the Cerra de la Silla mountain, there were concerns the stadium would be harmful to the local wildlife.

In 2017, an image taken from the top tier was posted on Twitter and went viral.

If you’re losing, you’d definitely have a mountain to climb here. 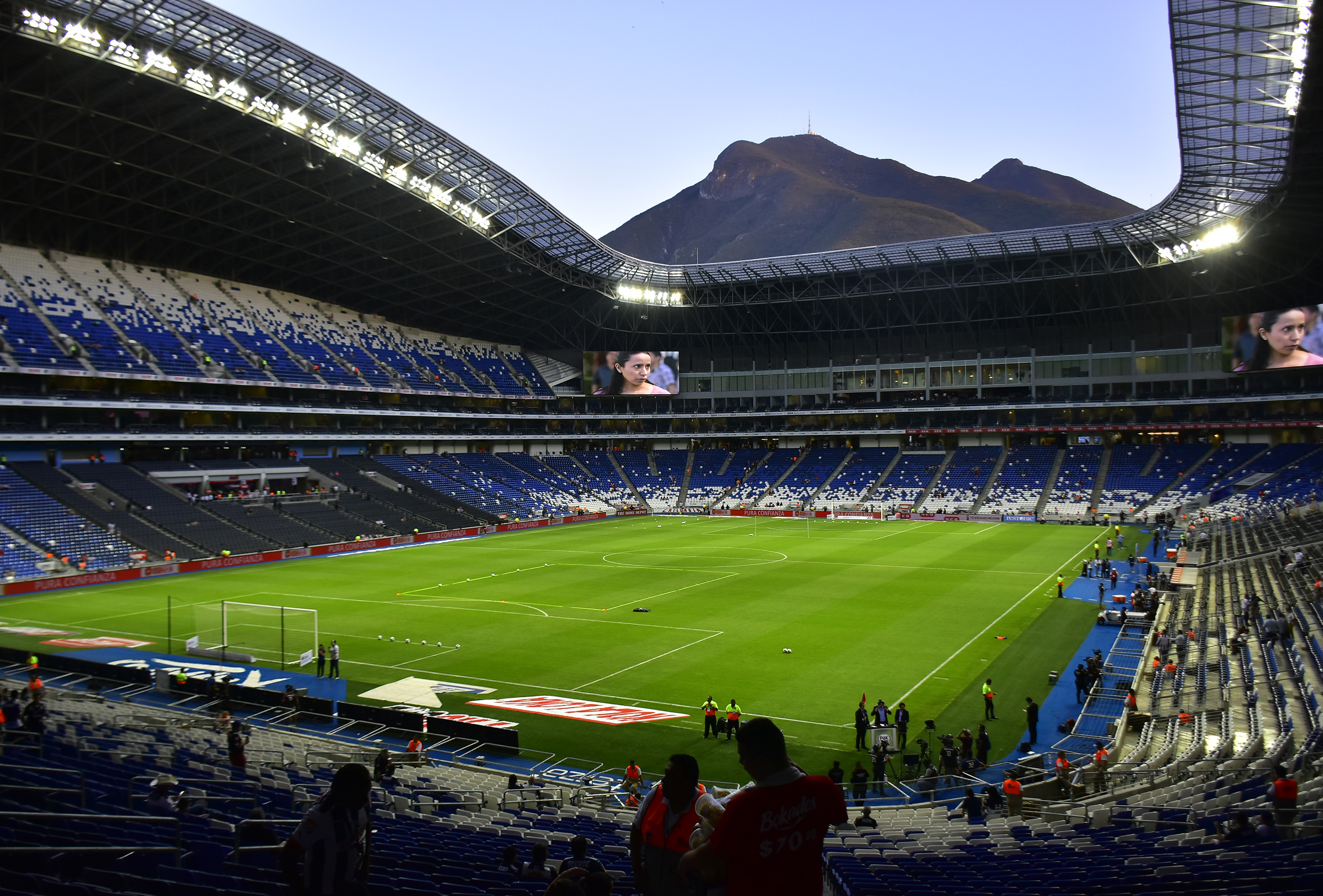 C.F. Monterrey’s home was opened in 2015 and is near the Cerra de la Silla mountainCredit: Getty Images – Getty 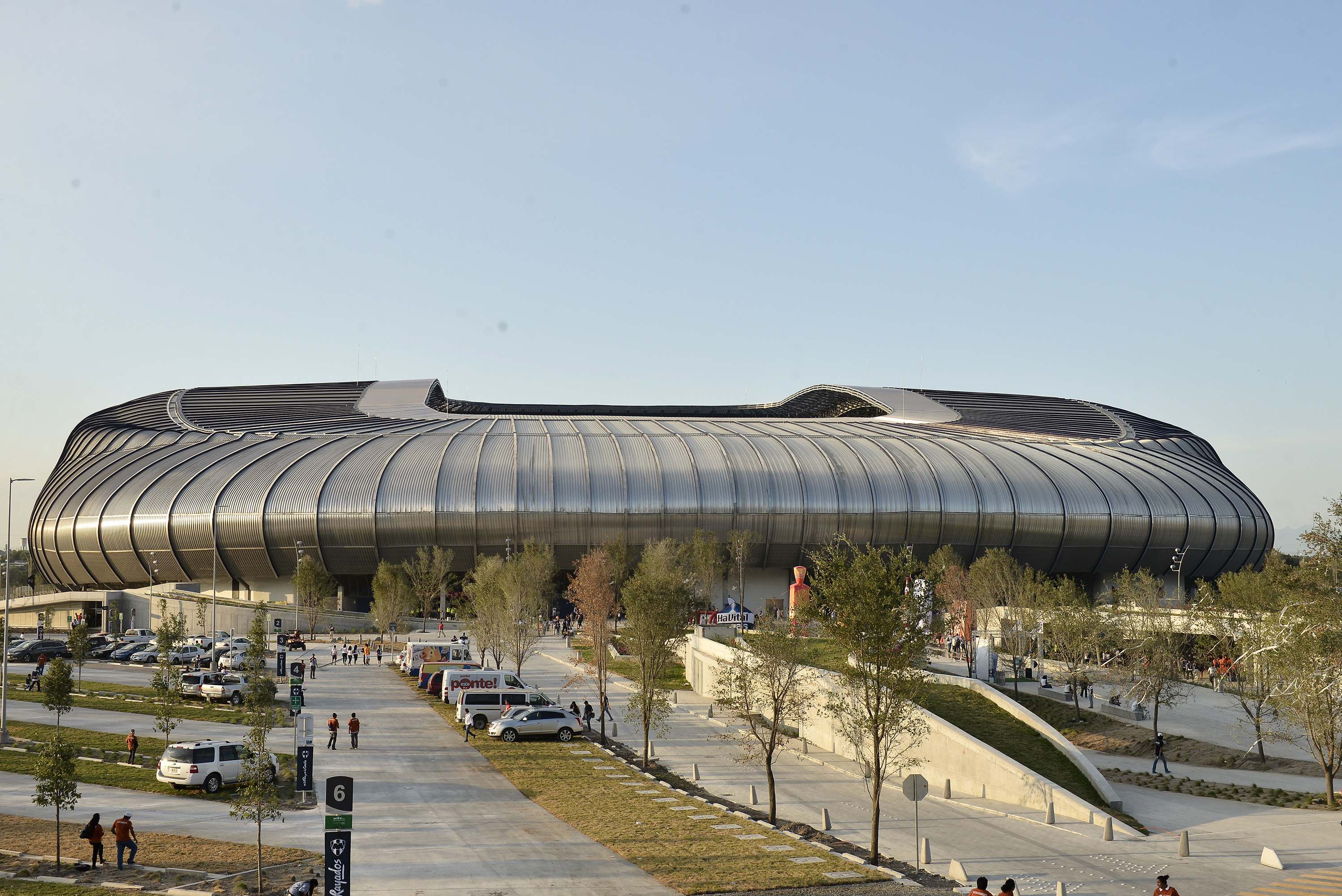 There were concerns the stadium would affect local wildlifeCredit: Getty Images – Getty

Back to Croatia we go for another eye-opening arena.

The Gospin Dolac in Imotski appears to be quite normal, until we tell you behind the stand there’s a 1,640 foot drop to a lagoon, where you will find the Blue Lake.

It’s the perfect place to kick the ball in the dying minutes, if you’re trying to waste a bit of time. 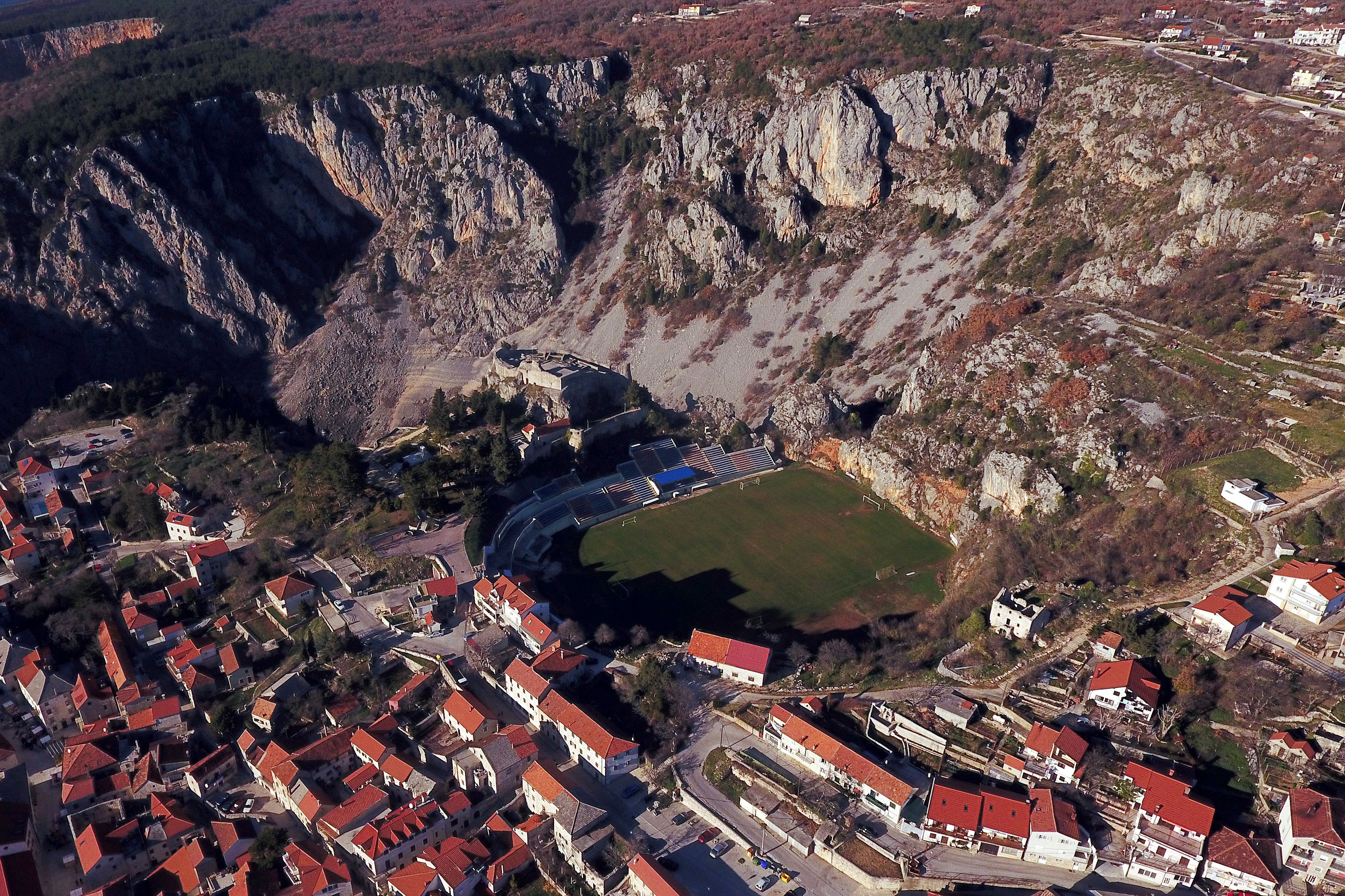 At the Gospin Dolac stadium there’s a 1,640 drop behind a goal that leads to a lagoonCredit: AFP – Getty

In Singapore they like to do things a bit differently, including this pitch on specially made floating platform in Marina Bay.

It was opened in 2007, and is officially the largest floating stage – which is why pop concerts have regularly been played at the 30,000 capacity venue.

However, the Singapore national team haven’t yet taken up the opportunity to play here.

In fact, nothing above Sunday League football has taken place at The Float. 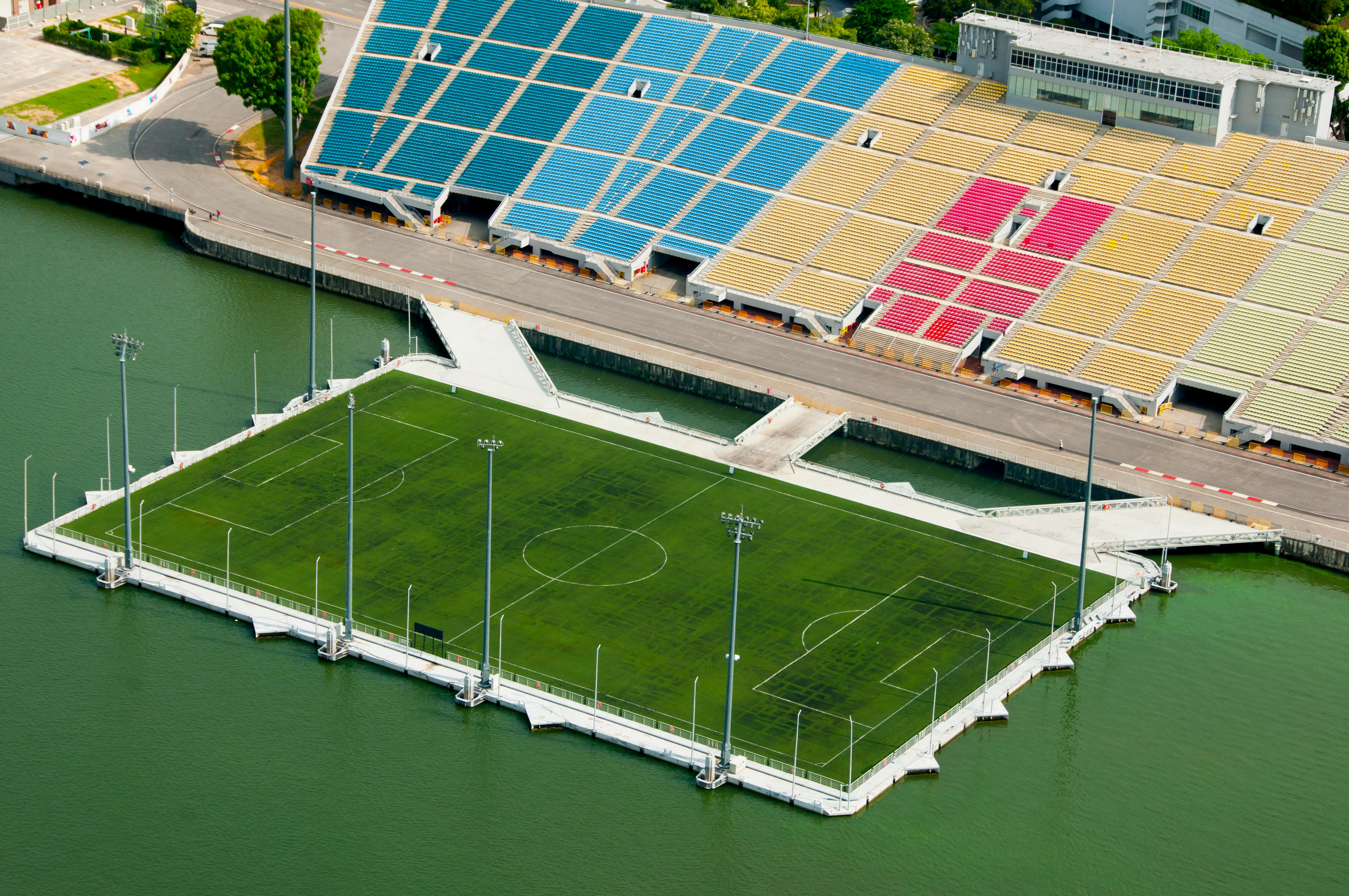 The [email protected] bay in Singapore is a sight to beholdCredit: Alamy 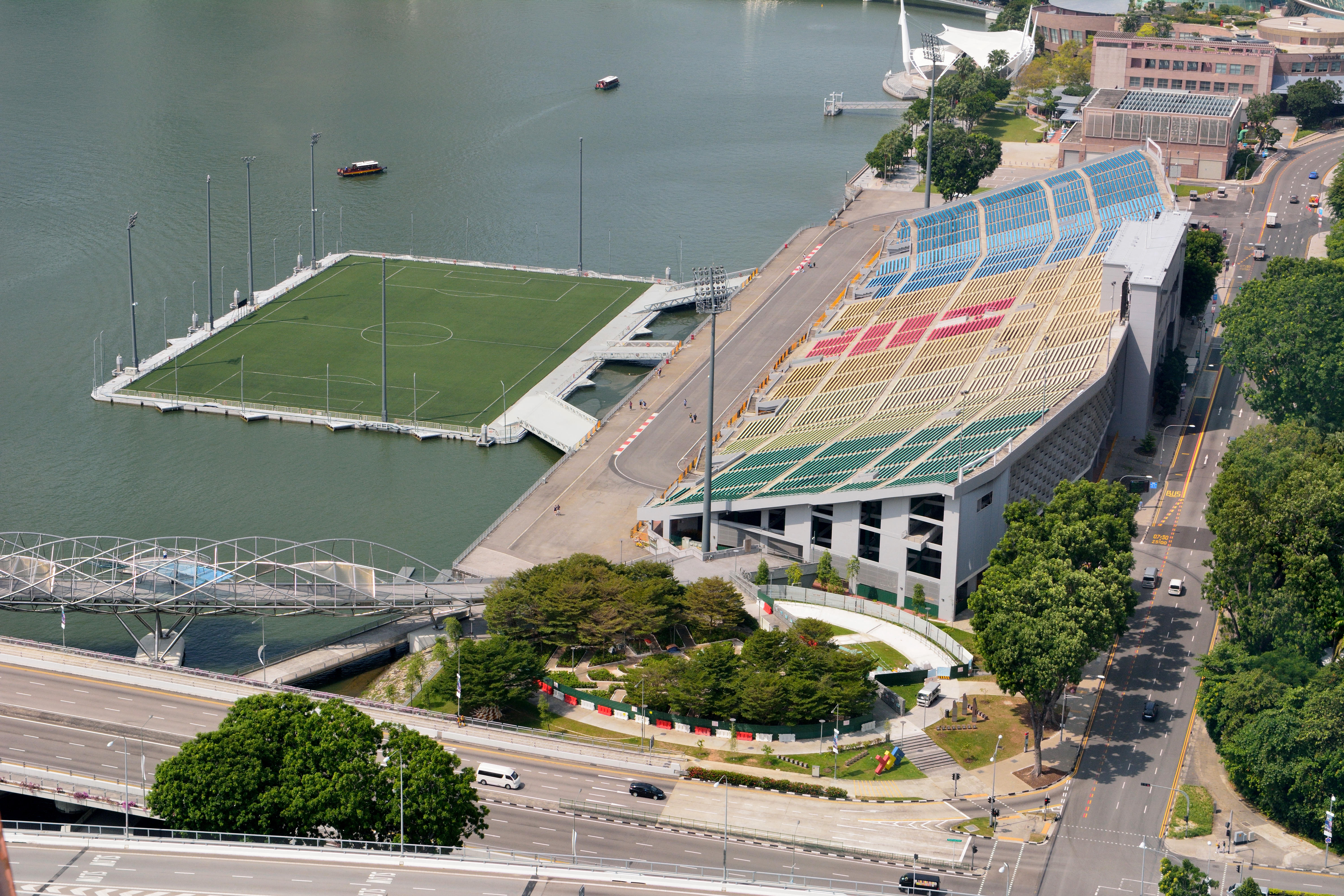 Incredibly, the football pitch is built on a floating stage in Marina BayCredit: Alamy

The fifth largest sports stadium in South Africa, the Mmabatho Stadium in Mahikeng was snubbed for selection for the 2010 World Cup, despite its 59,000 capacity.

It might be because the bizarre stands are built at strange angles that don’t even face the pitch!

Currently, the North West University uses it as a training ground.

On occasion, there’s the odd exhibition match taking place – but there is no permanent tenant.

The Mmabatho Stadium, featuring stands that points away from the pitch, was snubbed for selection for the 2010 World Cup 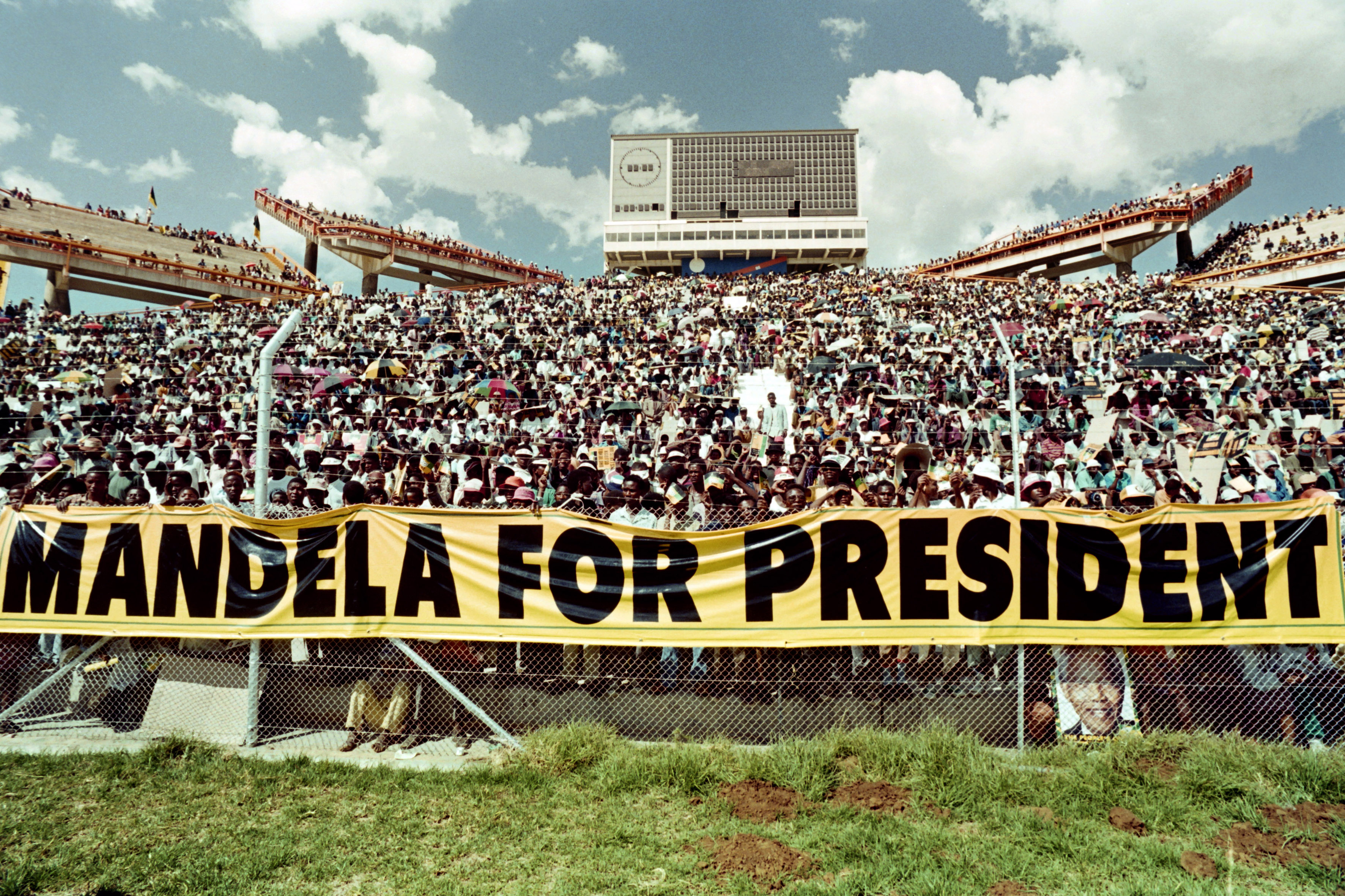 The Mmabatho Stadium in South Africa has stands pointing out at odd anglesCredit: AFP – Getty