WAYNE ROONEY has promised he will manage Derby in League One next season if they are relegated.

The Rams will drop from the Championship if they lose to Sheffield Wednesday at Pride Park. 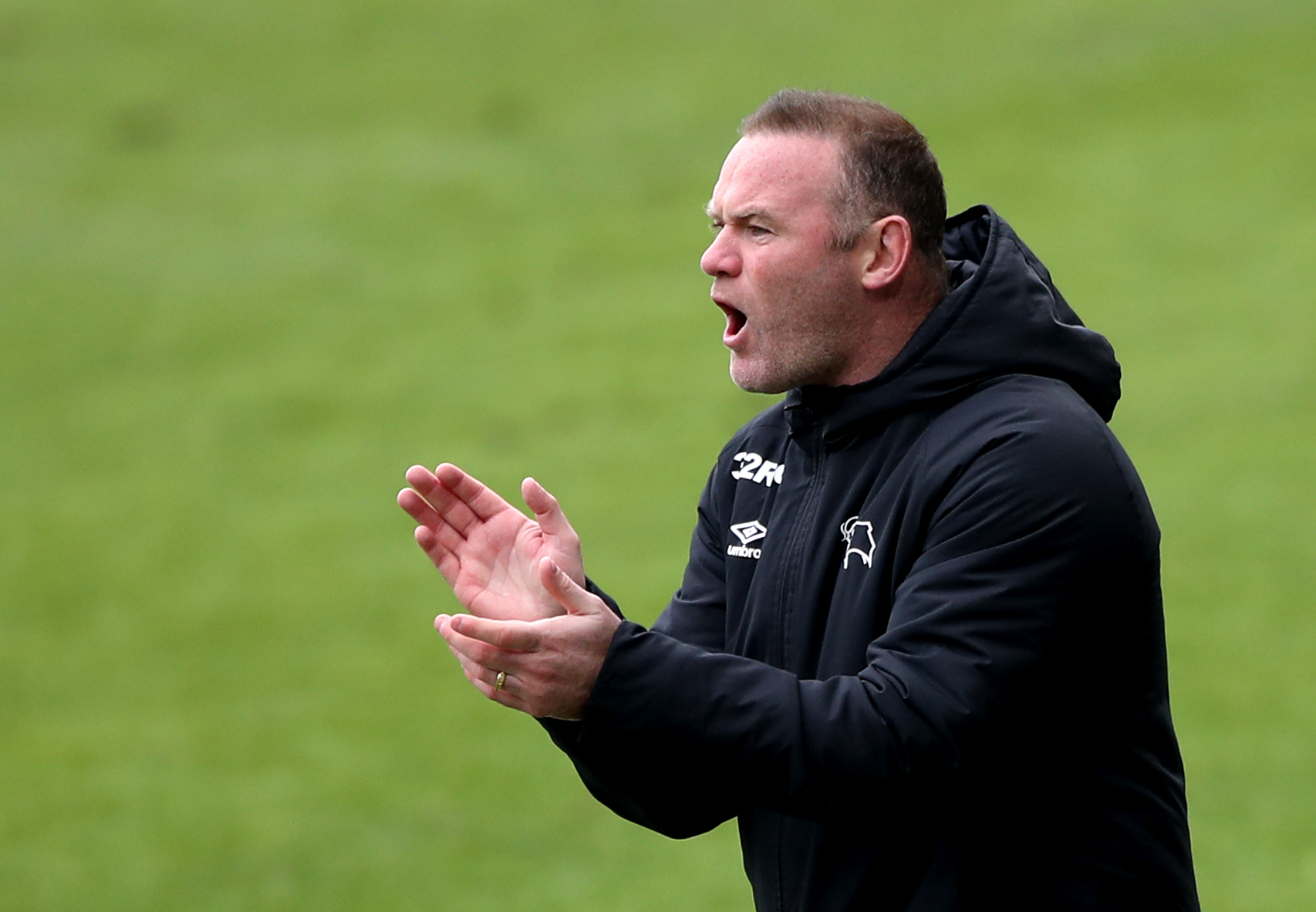 Wayne Rooney will stay with Derby County if they are relegated to League OneCredit: PA

And if Rotherham win at Cardiff, even a draw will not be enough.

Asked by SunSport if he will definitely remain in charge in English football’s third tier, Rooney said: “Yes, 100 per cent. My focus and commitment is to Derby County.

“They’ve given me this opportunity to be a manager and I’m committed whatever the outcome is.

“I’m never one to walk away from a challenge. I want to push this club forward.”

Of course, whether the club would want him to remain next season remains to be seen.

So far he has won 10 of his 35 games and lost 18 since taking over from sacked Phillip Cocu in November.

Taking charge with the Rams bottom of the table, he managed to haul them eight points clear of danger – but one win from the last 14 leaves them just two points clear today.

Rooney has stubbornly refused to dust off his boots since deciding to retire in November. 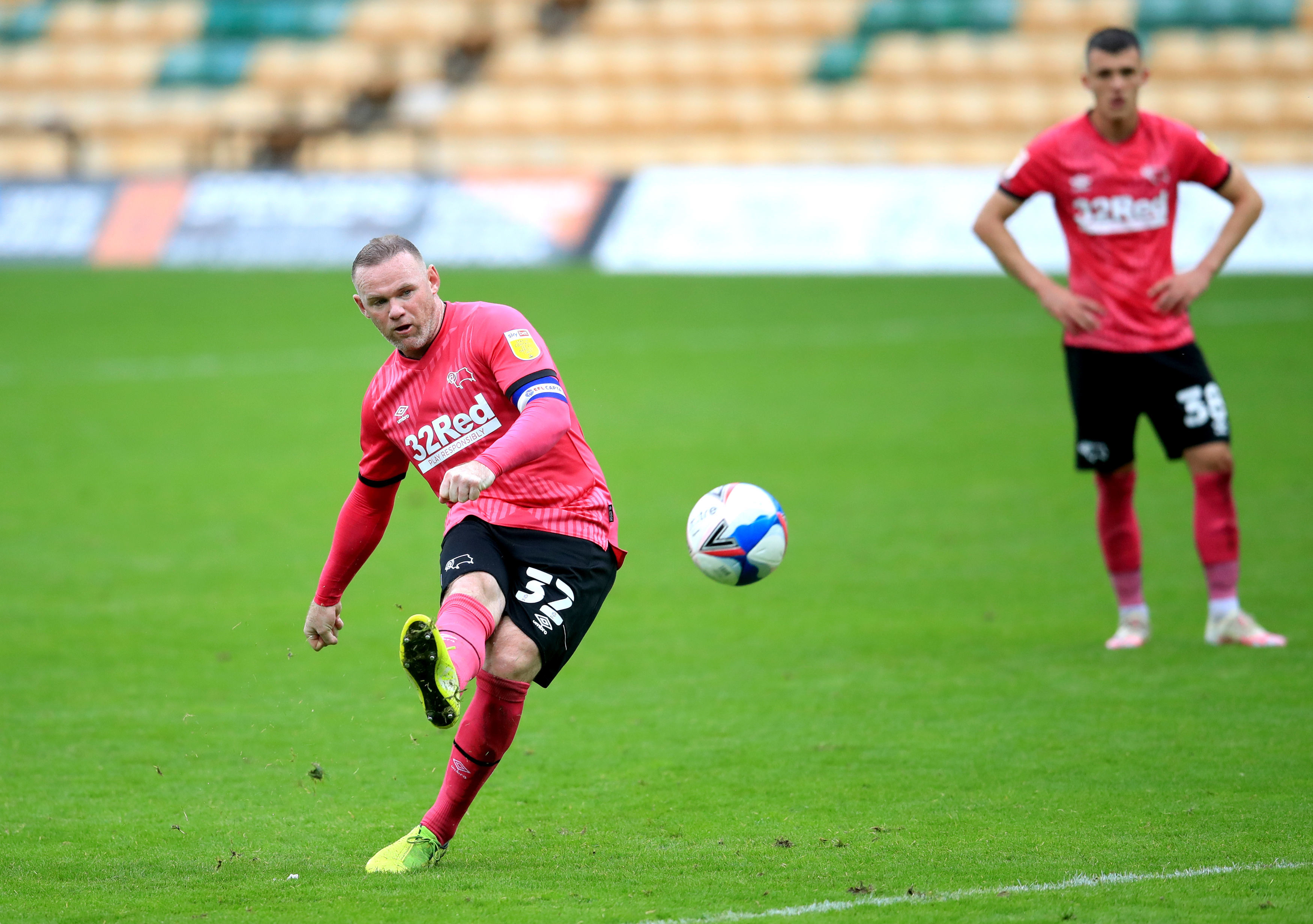 The former England captain said he is fnished with playing – and is tired of answering questions about itCredit: PA

And he said: “My time as a player has gone. I’m fed up with answering questions about it.

“I’m manager of this club and must manage these players to get a result tomorrow.

“I won’t be playing football ever again. I want that put to bed now.

“I wasn’t exactly scoring many goals. I scored a free-kick and played midfield.

“I don’t think I would’ve added much to the team since. The time was right to stop playing and focus on my job.”

Rooney is every bit as excited about this lunchtime’s cruncher as he was in Moscow ahead of Manchester United’s 2008 Champions League triumph.

And he revealed that he was intending to spend last night doing exactly the same as he was against that famous victory over Chelsea on penalties.

He said: “I laid in my bed in Moscow watching Sister Act. This evening, I’ll lay in my bed and watch a different movie.”

Rooney has been building this game up as a cup final.

Given he won seven cup finals during his playing career – the Champions League, Europa League, World Club Championship, an FA Cup and three League Cups – he knows a thing or two about being successful in them.

And he said: “We’re in a position where we have a cup final. The previous 45 games don’t mean anything.

“If we win, we get our rewards. If we lose, we’re in a difficult place.

“I’ve told the players ‘If you can’t get up for a cup final, then you can leave the building now. You won’t be considered for the match.’

“But every player wants to play.

However, the Rams have no momentum going into the game – having lost their last six games.

Wayne Rooney has retired from playing after an illustrious 19-year career.

But Rooney said: “Birmingham won the League Cup against Arsenal in 2011 but their form was dreadful in the Premier League.

“They got themselves into the cup final and won it.

“There is pressure – but you must embrace it.”

Derby’s slump has been down to poor defending and shocking game management – something Rooney acknowledges.

With various permutations surrounding both Rotherham’s trip to Cardiff and the do-or-die cruncher at Pride Park, Rooney admits there may be a scenario where his team must consider what is happening in South Wales.

He said: “We’re going for a win but of course towards the end of the game if Cardiff are 2-0 or 3-0 up and we know a draw is enough, then we’ll look at where we are in our game and take whatever action we need to.

“But, from the first whistle, we’re going to try to get three points.”
Rooney has never been in a situation like this before – having not been involved in a relegation fight during his successful playing career.

And asked what he has learned from his experience in the unforgiving lower reaches of the Championship, the England legend said: “You learn what players become leaders, the players that have shown character.

“I have to say the players – even though we haven’t got the results we’ve wanted – have given absolutely everything.

“I’ve spoken to different people who have been in this situation. My assistant manager Liam Rosenior for example has been relegated before.

“Everyone has told me about splits in the dressing room, players not liking each other and arguing. And that has ended up in them getting relegated.

“With this group of players, as individuals and a team, they’ve been 100 per cent committed, which is fantastic to see despite the situation we’re in.”

England legends who flopped as managers

WAYNE ROONEY is in danger of joining these Three Lions heroes who failed to make an impression in management.

BOBBY MOORE (Southend): Only man to captain England to World Cup glory, the West Ham hero managed the Shrimpers and in his time there the club were relegated from the old Third Division and then finished fifth bottom in the Fourth Division, narrowly avoiding having to apply for re-election to the Football League.

BOBBY CHARLTON (Preston): Took charge of the Lancashire club and signed his ex-Manchester United and 1966 World Cup-winning team-mate Nobby Stiles as player coach. But North End were relegated from the Second Division after finishing third from bottom in 1974. Despite Sir Bobby dusting off his boots the following season, he failed to get the club promoted and finally quit after a disagreement over John Bird’s transfer to Newcastle.

PAUL GASCOIGNE (Kettering): Gazza was appointed by the Northamptonshire club who played in Conference North in October 2005 – but his tenure lasted just 39 days with owner Imraan Ladak claiming the legendary midfielder drank every day he worked. He won three, lost three and drew two of his eight games in charge.

ALAN SHEARER (Newcastle): Record Premier League scorer took the reins of his beloved Geordies for the final eight games of the 2008-09 season while Joe Kinnear recovered from heart surgery. But his spell in charge was a disaster, ending in relegation to the Championship after only managing one win, two draws and five losses.

GARY NEVILLE (Valencia): His time in Spain was a disaster after his surprise appointment in December 2015 and was sacked after less than four months in charge. During his time at Valencia , he won just three of their 16 La Liga games and were just six points clear of relegation when they fired him. They also crashed out in the group stages of the Champions League, got stuffed 7-0 by Barcelona, did not keep a single clean sheet and the ex-Manchester United ace was hated by the fans.