THIS is the shocking moment a brawl erupts between Rangers and Hearts supporters after the Scottish Cup Final.

Dramatic footage shows a large group of football fans fighting outside of a coach after supporters stopped at a service station.

Some of the group can be seen throwing kicks and punchesCredit: Twitter/Mickh1916 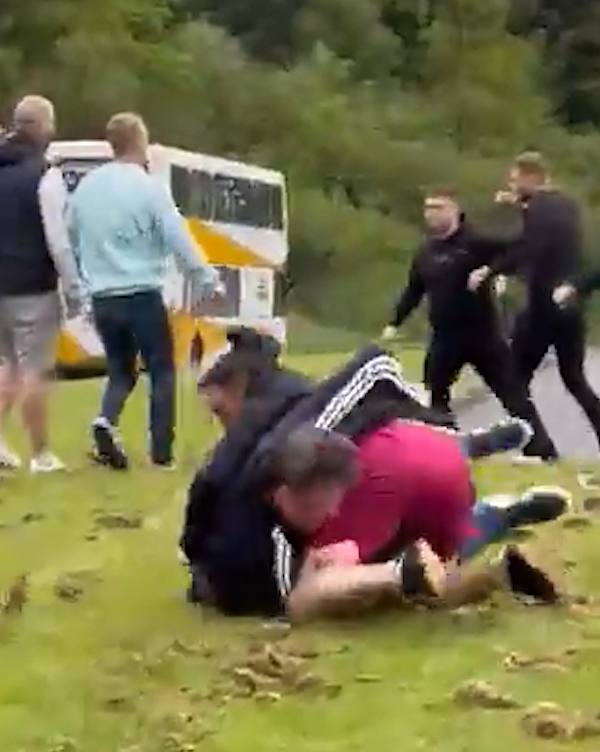 Supporters pulled each other to the ground in the scuffleCredit: Twitter/Mickh1916 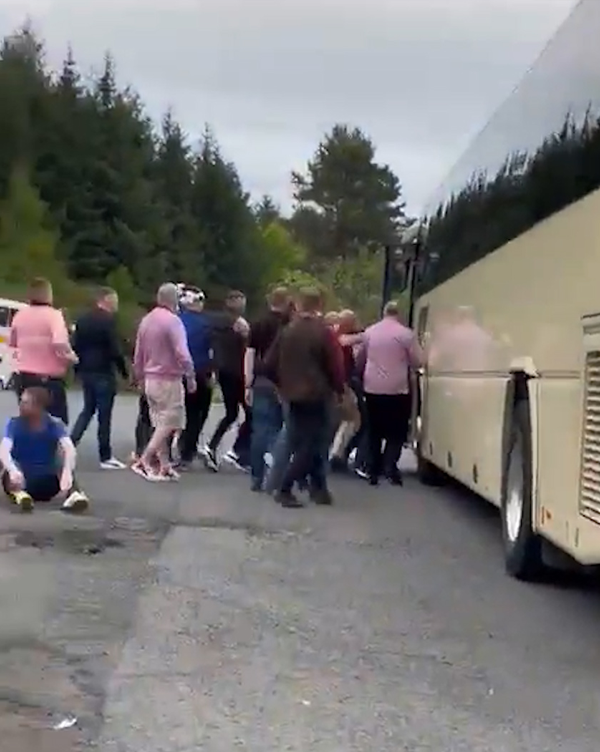 Fans clashed at entrance to the bus

During the violent footage, rival fans are filmed hurling punches and kicks at each other amid the chaotic scenes.

Two other fans can be seen rolling around the grass as they trade blows during the rammy.

A number of missiles, including bottles, are thrown throughout the clip, while fans also targeted the bus.

Later in the video, a large crowd – who appear to be wearing Hearts colours – confront other fans at the entrance to the bus and more violent exchanges take place.

The incident is believed to have taken place at Harthill Services on the M8, between Lanarkshire and West Lothian.

It’s understood the bus – operated by Dunbar-based firm Eve Coaches – was transporting fans from the Prestonpans Rangers Supporters Club back from the game at Hampden.

Cops confirmed they are aware of the footage circulating on social media but said they had not received any reports relating to the incident.

A Police Scotland spokesperson said: “Police are aware of footage circulating but have received no reports of the incident.

Most read in Scottish Premiership

“If anyone has any information surrounding this, please come forward and speak to police.”

It comes after Rangers won 2-0 at Hampden to secure the Scottish Cup trophy.

Goals from Ryan Jack and Scott Wright in extra time ensured the Light Blues did not end the season without a piece of silverware.

Elsewhere, in a separate incident, we told how a brawl erupted in Glasgow city centre after Rangers lost the Europa League Final.

Footage appears to show Gers fans fighting each other in a brutal attack after their team lost 5-4 in penalties against Eintracht Frankfurt in Seville.

A video posted online shows a large group of football fans wearing Rangers jerseys pulling and hauling at one another as they spill out onto the road.

Some of the group start kicking at one another as one woman was pulled to the ground.

I survived the last US monkeypox outbreak