RAPHINHA may have scored the opening goal in Leeds’ 2-1 win over Norwich at Carrow Road – but he might have some apologising to do to boss Marcelo Bielsa.

The 24-year-old wiped out the crouching Bielsa as he stretched to try and keep the ball in play in front of the dugout.

Leeds star Raphinha ran to try and keep the ball in play but his momentum meant he couldn’t stopCredit: Sky Sports 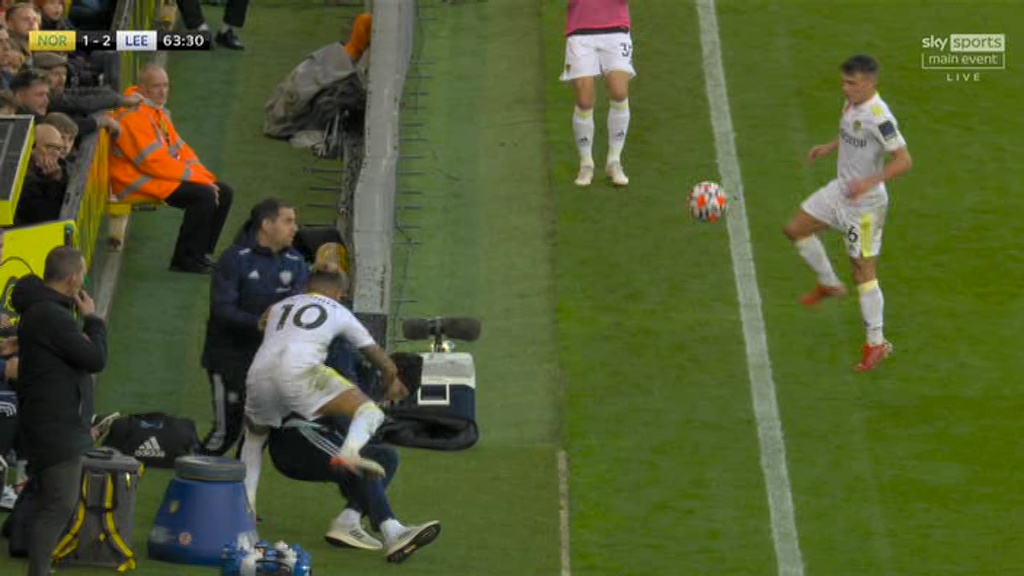 The Brazilian flew straight into his manager BielsaCredit: Sky Sports 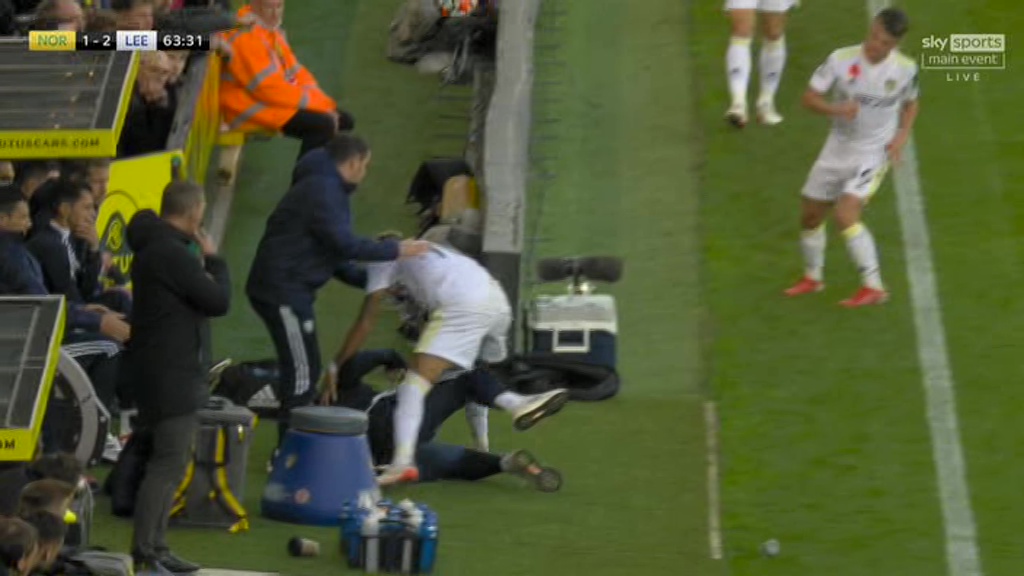 Bielsa was floored by the collisionCredit: Sky Sports 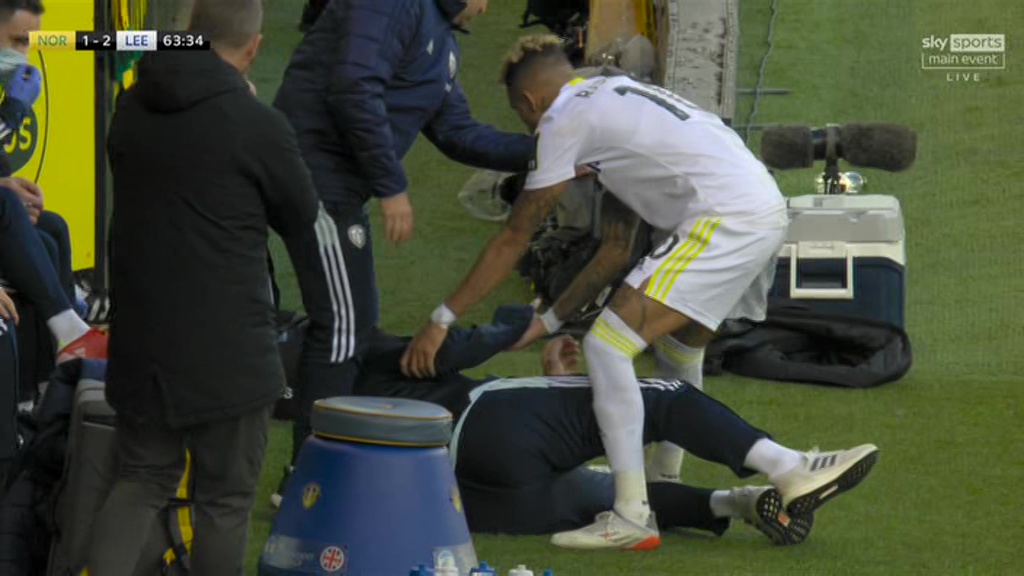 He was crouching on the floor instead of sitting on his usual pitchside bucket.Credit: Sky Sports 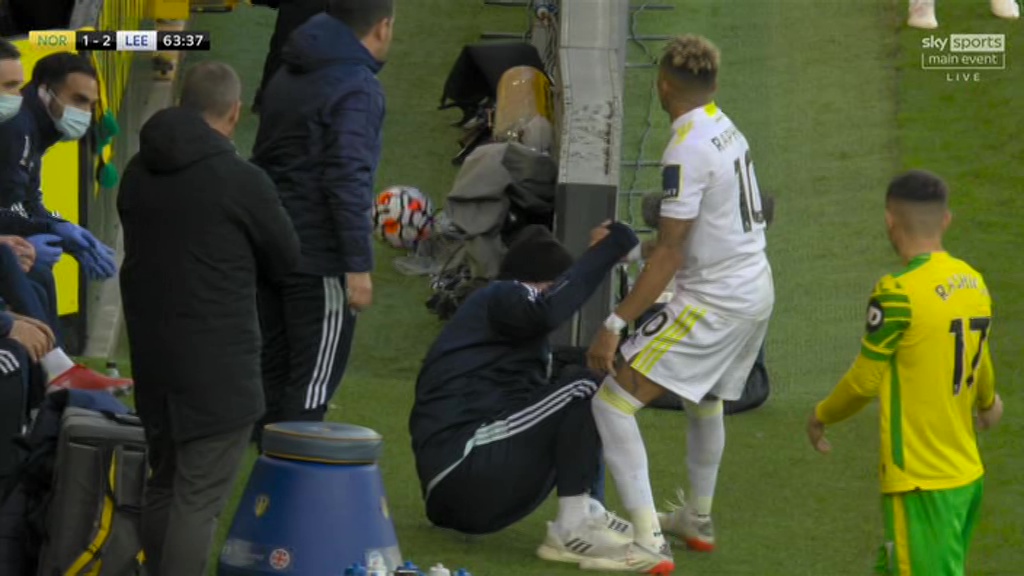 But the Leeds man helped his boss back to his feet after a moment of panicCredit: Sky Sports

With Leeds leading 2-1, after three goals in a frantic five minutes, Raphinha jumped to try and nod a bouncing ball into the path of Dan James.

But not only did he fail to keep the ball in play – he ended up clattering into Bielsa, 66, as the Argentinian manger watched on from the touchline.

But with no lasting damage done the Leeds boss is unlikely to mind after Raphinha scooped the man of the match award.

And fans loved it too, with one writing on Twitter: “Still can’t work out what’s better, those 3 points or the look of sheer terror on Raphinha’s face as he bodyslammed Bielsa to the floor.”

And after a poor run of recent results another fan joked: “Even Raphinha’s had enough of Bielsa.”

The Brazilian winger has been in stellar form this season despite Leeds’ poor form, scoring four goals in nine Premier League games so far.

His performances have been the shining light in what has been a terrible start to the campaign for the Whites.

Victory against bottom of the table Norwich is just their second win in ten league games for the Elland Road outfit in their second season back in the top flight.

It leaves Bielsa’s side just one place above the relegation zone, although he will be hopeful that the win can kickstart a good run of form.

And he largely has wide-man Raphinha to thank for the precious three away points.

Man of the match Raphinha managed 65 touches at Carrow Road – including seven in the Norwich box.

He also created two chances for his team-mates and managed three efforts on target.

His goal wasn’t bad either.

The three-cap Brazil man gathered the ball on the right hand side before cutting inside on to his stronger left inside the area.

He faked to shoot – leaving Andrew Omobamidele on his backside – before flashing past Tim Krul from 12 yards out.

Raphinha joined Leeds in a £19million deal from Rennes a year ago, scoring six times and providing nine assists in his debut Premier League season.

His impressive form led to a Brazil call-up, where he has scored twice in three appearances.

It’s led to speculation regarding his future at Elland Road, with European giants Liverpool and PSG both rumoured to be keen on a move for the playmaker.

Raphinha Belloli shows off his moves in training with Leeds