PEP GUARDIOLA was left shocked after he was told Fernandinho would be leaving Man City – by a JOURNALIST.

The club captain – who turns 37 next month – has been used sparingly by the Spaniard in the last couple of seasons.

“Sorry?! Oh…I didn’t know that!” 🤯#MCFC boss Pep Guardiola did NOT know that Fernandinho plans to leave the club at the end of the season 👀 pic.twitter.com/h5TLGqcxdn

Fernandinho has been with City since 2013Credit: Getty

He has started only four matches in the current calendar year – and only one of those was in the Prem.

And today he revealed he will go back to his homeland this summer in a bid to play some regular football before he hangs up his boots.

The news came as a surprise to Guardiola – as City were hoping he would still be with them next season in some capacity.

Upon being told, he replied: “Sorry!?” 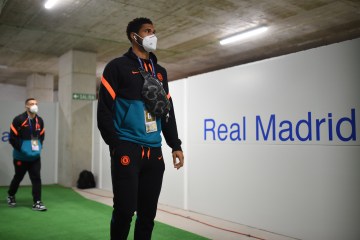 After hearing the news again, Guardiola said: “Oh, I didn’t know it.

“Fernandinho is so important to me.”

The Man City boss then joked: “I will say [to Fernandinho} Simon [the journalist] told me – is it true?”

When Ferdandinho was asked if he might stay and complete a decade at the Etihad, he said: “I don’t think so.

“I want to play. I will go back to Brazil. I decided with my family, which is the most important thing for me.”

Fernandinho has since explained on Twitter he simply answered “spontaneously” and it wasn’t a deliberate slight not informing the club first.

He said: “I was 100 per cent honest and spontaneous in answering that question at today’s press conference. But anyone who knows me also knows that my greatest honesty is with Man City and my duties as team captain.

“My focus is 100 per cent on winning all the titles we are playing for and I will only talk about my future at the end of the season. Let’s keep pushing!”

But unlike those others, he still has one more chance to lift the Champions League before he leaves.

He said: “It’s been a while. It’s important to win any titles. Of course the Champions League is the most prestigious competition we are in and we will try to do it again.

Guardiola said he planned to speak to the veteran midfielder in the summer to determine his plans.

The midfielder’s contract expires at the end of the season – and it looks like his ninth season as a City player will be his last.

Guardiola said: “I said at the end of the season we will talk. Maybe it is a family decision, maybe he wants more minutes. I would love to be with him again next season.”

But if his mind is made up, Pep says they will be playing for their captain as they look to book a semi-final place by finishing off Atletico Madrid on Tuesday.

Ahead of Wednesday’s second leg, in which they lead the tie 1-0, he said: “We are going to play for him and give him the best farewell moment, reaching again the semi-final of the Champions League and try to go through again.

“I understand the players want to play, it is completely understandable. Not just because he is 36

“I understand he wants to go back to Brazil, with the father mother there and I am pretty sure the club is going to help him do what he wants.”