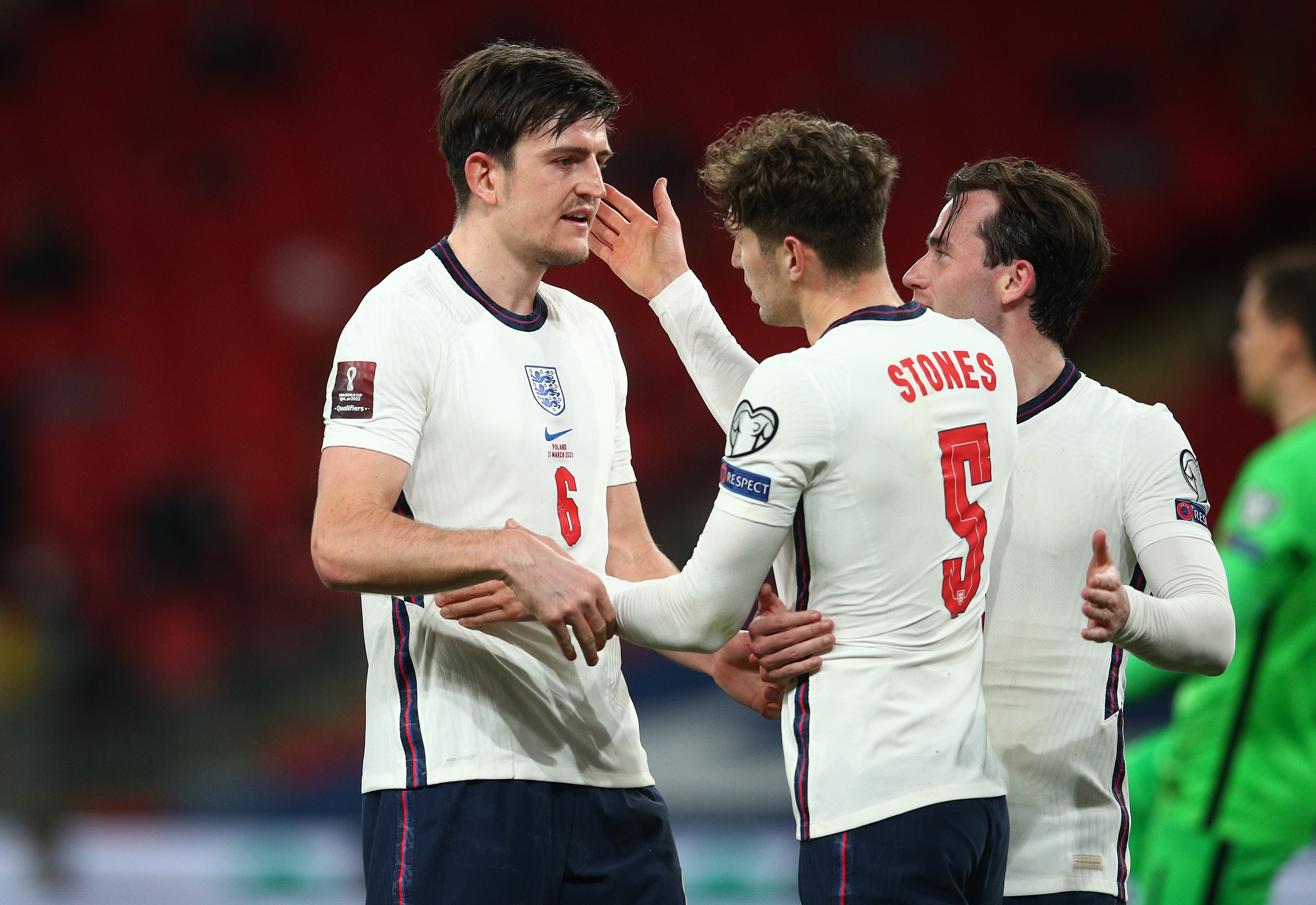 Harry Maguire celebrated with centre-back partner John Stones, who provided an assist to make up for the blunder that gave Poland their equaliserCredit: Getty

It was Maguire’s first international goal since the 2018 World Cup finals and the Manchester United skipper made a beeline for Stones after scoring.

He said: “Defenders can always make mistakes and sometimes we are at fault for goals and John has obviously had a little blip tonight.

“I said to him ‘keep going and we’ll get the win’ and he made up for it with a great header at the back post for my goal.

“John has been brilliant this year and I’m sure he’ll not make a mistake like that again. It was a big performance from him to react like and come back with the assist.”

England boss Gareth Southgate was equally forgiving of Man City man Stones’ dreadful lapse of concentration in possession on the edge of his own penalty area.

He said: “John has been having a really good season but he knows he’s made a mistake tonight.

“The pass to him didn’t help the situation and brought a bit more pressure on him and he could have folded after a minute like that.

“But he didn’t do that. He’s managed to compose himself for the rest of the game and it was important that he played a part in our winning goal. 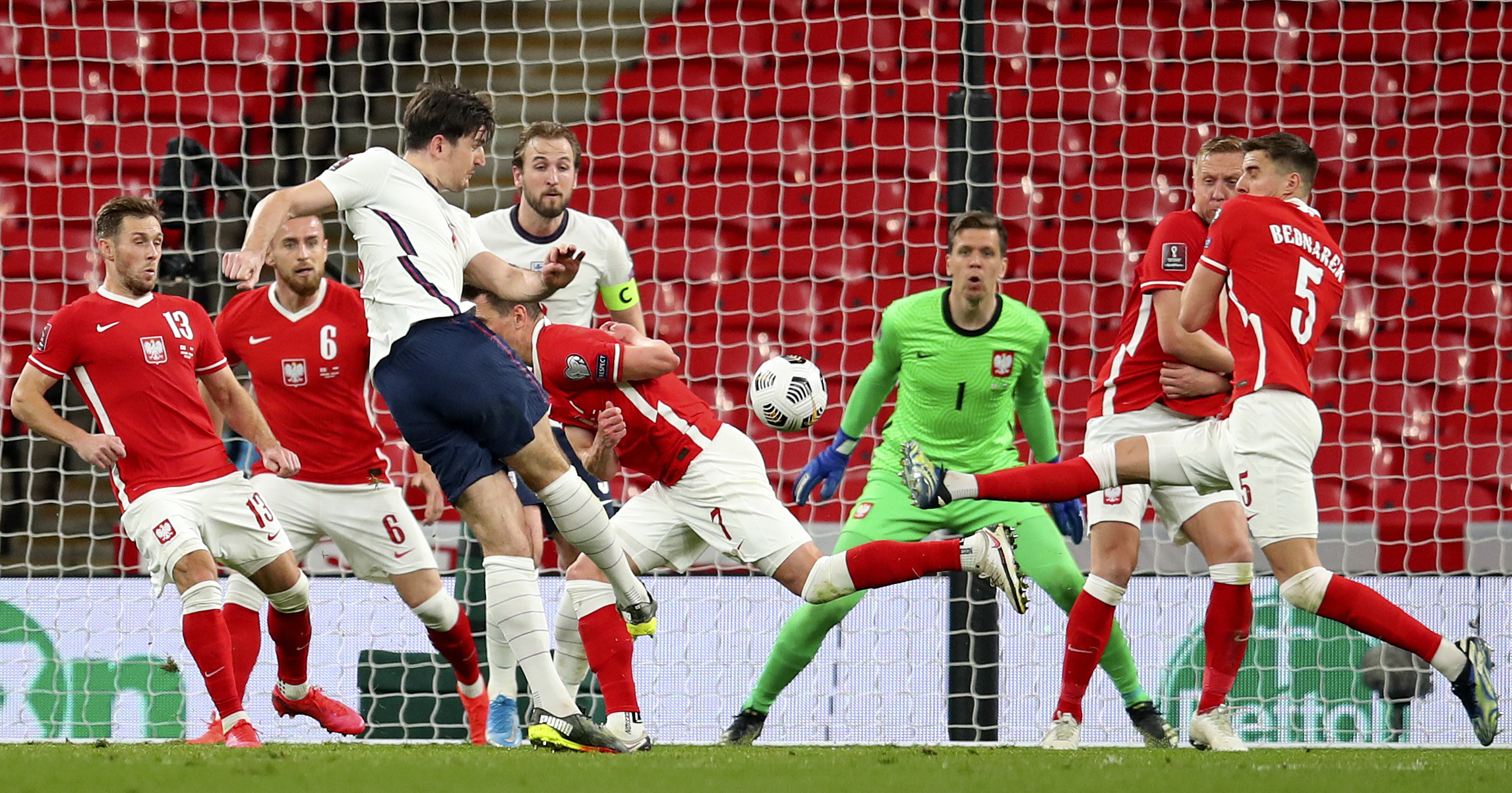 Maguire thumped home late on to ensure England made it three wins from threeCredit: AP

“We started well tonight and got the early goal but to concede like that can hit the team. But they stuck at it and recovered their composure.

“We had a lot of players missing tonight and I think slight fatigue started to tell in the end, but the players stuck at it and they deserved the win.

“The group has been fantastic to work with this week. Nothing that has happened has surprised me and I’m really pleased with the collective approach and how we’ve supported each other.

“In 14 matches we’ve conceded five goals and two were penalties and another was a free-kick.

“And we’ve achieved our objective of nine points which a lot of big countries haven’t been able to do.”

Southgate also revealed that Uefa are considering the possibility of allowing larger squads at this summer European Championship finals to cope with the effects of Covid.

He said: “There are discussions of perhaps extended numbers in the squad but I’m not sure I’m behind that because there is a skill to picking 23.

“You have to make good decisions and that can be lost if you get an extended group.”

Maguire added: “It’s a great feeling to score but more important was the big three points which puts us in a great position in our group.

“We’re playing for the World Cup, the biggest competition in football, so it’s never going to be plain sailing and controlling every game for 90 minutes.

“But we’ve seen some big nations have already dropped points and we have a lot of injured players coming back who will make us stronger and give us a better opportunity to go to the Euros and win the trophy.

“I’ve already played at the World Cup and I went to watch the Euros in France as part of the crowd when I saw the atmosphere and the passion of the fans so it would be an amazing achievement to be selected for the finals this summer.”