Football’s coming home – and away. After a year and a half of TV games with piped fan noise and the only swearing from the suddenly audible players, the frisson of real away travel is here. Soon will come the excitement of seeing the floodlights of a strange town as you arrive on the train and the despairing chants when your side go 6-0 down with 20 minutes left of: “You’re nothing special, we lose every week!”

Old rituals will have to be remembered. The dress code for an away day is always difficult. Colours under a concealing jacket, perhaps? A long coat marks you out as a soft southerner, a furry parka or cap as an Essex Man. Something blander to blend in is best. Big pockets are useful to conceal anything intellectual such as books. Accessories are important, too. My pal Big Joe once took a copy of Granta and an umbrella to Sunderland, making me wonder if we’d ever get out alive.

Train journeys always seem to involve strangely optimistic fans drinking at unfathomable hours. Then comes the expectant rush at the ticket barrier. Upon arrival there is the ceaseless search for alien chip shops and greasy spoons and then an attempt to find where they sell the programmes and a pub that might serve away fans. Getting past the stewards can present several problems. One friend had his four mini‑yogurts confiscated by a steward at Manchester City. Yet he also liked to shave on the train up north and managed to get into another northern enclave carrying a packet of disposable razors. Another pal had his copy of the Saturday Guardian confiscated at Stoke because it was deemed a fire risk.

Away tickets are difficult to get hold of following West Ham and I’ve often had to pass myself off as a home fan, having obtained a seat through friendly rival fans. This can necessitate strange actions, such as pretending to be a senior citizen at Chelsea and having to be nice about Frank Lampard, or north of Watford never speaking in case they detect your accent. It’s also rather difficult when you almost leap out of your seat after a beautiful curler from Michail Antonio and then have to pretend you are simply applauding the home goalkeeper’s fine parry.

At least in the designated away section you can enjoy chanting without censorship. Humiliating defeats still create moments of surreal humour. A 4-0 West Ham loss at Charlton was memorable for a rousing and lengthy chorus from the away end of: “Oh Christian Dailly, you are the love of my life!” – the next line is probably best not repeated. 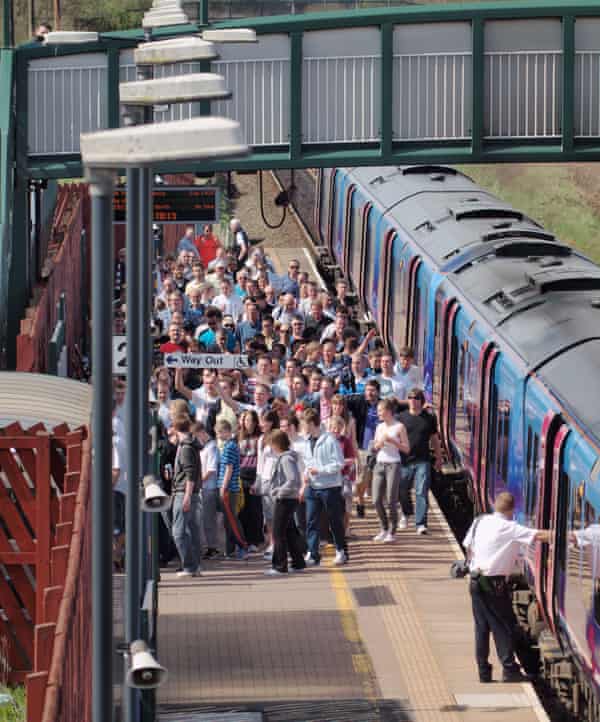 Certain grounds can evoke a Proustian rush of frying burger smells and other memories. Seeing the lyrics of Elton John’s Your Song on the stand at Watford takes me right back to black vinyl and being 13. Old Trafford evokes Hammers’ fans singing “My name is Ludek Miklosko, I come from near Moscow!” at a tram station after a draw in the FA Cup. Sitting up in the gods at Newcastle still reminds me of an all-you-can eat Chinese lunch and sitting with a posh anthropologist friend who compared both home and away fans to pike-wielding yeomen about to fight in the Hundred Years war.

Away days can give great highs and massive lows. There was nothing better than standing outside the Emirates singing: “Last win at Highbury, first win at Emirates!” in the Great Escape season of 2007. Conversely a 3-2 defeat at Wigan after being 2-0 up ensured West Ham were relegated in 2011. To round it off a plane flew above the stadium with the banner: “Avram Grant: Millwall Legend.” Grant was sacked on the way home and it was the footballing equivalent of Joy Division’s Atmosphere, or perhaps Love Will Tear Us Apart.

But it is, as they say, a day out. Soon away fans will be back, Covid passes permitting. We’ll be listening to the angriest men in the world on car radio phone-ins, returning on delayed trains that have invariably run out of beer and sandwiches, and staggering off the train wanting a compensatory pint in the Doric Arch at Euston only to find it’s shut. Can your team do it on a cold night in Brentford or Burnley? We’re about to find out.

Pete May is a West Ham season-ticket holder, author of Goodbye to Boleyn and blogs at hammersintheheart.blogspot.co.uk

Strictly 2021: Tilly Ramsay defended against critics asking who she is

I Am Legend vaccine conspiracy slammed by scriptwriter