“Whatever happens, we’ll give it absolutely everything.” That was the message in a tweet posted from Tottenham’s official account before their game against Manchester City, and there was no need to be Sherlock Holmes to figure out what it was getting at. The elephant in the room, the transfer saga of the summer – the England captain who may or may not have gone on strike.

As it turned out the “whatever happens” was what most people expected – Harry Kane being left out of Spurs’ matchday squad. Nuno Espírito Santo, before his first game in charge, put it down to a lack of fitness on the striker’s part, given he had taken part in only two training sessions following an extended (strike-related) holiday and a period of quarantine.

But he knew what everyone else did – Kane was as much mentally as he was physically incapable of facing the team for whom he truly wants to play.

The uncertainty surrounding Kane’s future is a cloud that will not pass over Spurs, certainly not while the transfer window remains open. But in a new era comes a chance for new heroes to emerge, or indeed existing ones to take on greater prominence, and in that regard it is worth going back to that pre-game tweet. Because underneath the message of defiance was an illustration containing three players – Hugo Lloris, Pierre-Emile Højbjerg and Son Heung-min – all important figures for Tottenham and, in the case of the latter, someone who, should Kane join City, would arguably become their most vital.

Because in an instant Son would become Spurs’ most potent, proven attacker and someone the supporters can fully buy into, given his show of commitment to the club via the four-year contract extension he signed last month. “I’m so happy to be here,” the South Korean said at the time and it was clear he meant it.

It is six years since Tottenham signed Son from Bayer Leverkusen for £22m, a figure which back then felt somewhat excessive but which now looks a steal. The 29-year-old was a revelation during Mauricio Pochettino’s time in charge and continued to excel even during the toxic tenure of José Mourinho. Indeed last season was his best in terms of goals and assists – 22 and 17 respectively, with only three players having been involved in more Premier League goals since February 2020: Mohamed Salah, Kane and Bruno Fernandes.

Quite simply Son is a superstar and the early indications are that Nuno plans to build his attack around him should he lose Kane. The Portuguese deployed the player as a central striker in a 4-3-3 formation during pre‑season and, having seen him score three times, repeated the trick against City. And boy, did it work. 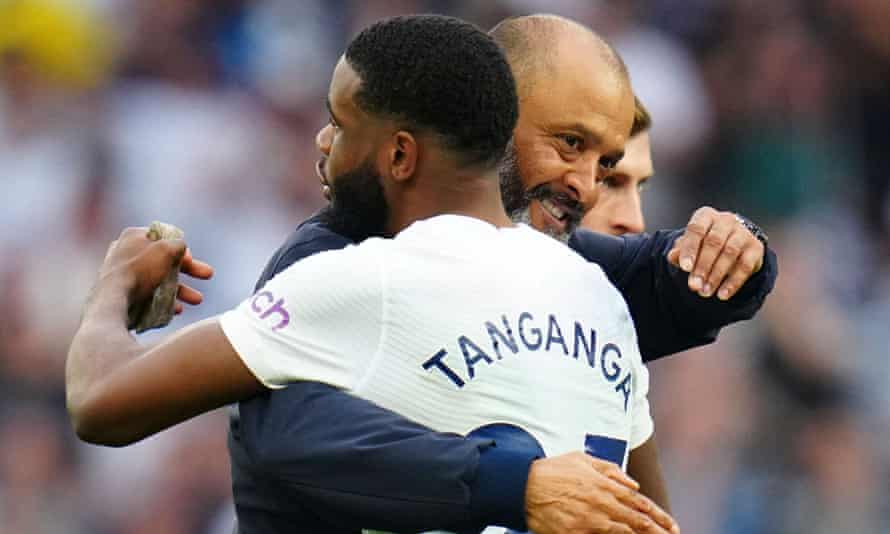 Another goal and it was one for which the Tottenham Hotspur Stadium erupted on a day that the return of spectators swept into this part of north London. Up against Nathan Aké on the left-hand edge of City’s area on 55 minutes, Son performed a couple of step-overs before drifting inside the defender and sending a sweeping shot into the far corner of the net. It was a stunning finish and reward for the team’s display of togetherness, aggression and intent following an opening 20 minutes in which City threatened to blow them apart.

The nature of the goal was also notable, coming as it did via a counter-attack involving Lucas Moura and Steven Bergwijn, the wide men in Spurs’ three-man attack and who, it is clear, have the responsibility of providing the team with thrust, especially on the break. They were at it throughout, regularly getting Tottenham up the pitch and, in the process, providing Son with the platform to provide the killer touch. It came together magnificently with what proved the winning goal.

For all that, there were times, in the first half especially, when the attack malfunctioned, often due to a tentativeness from Son to truly hurt City or from his inability to compete in the air, and in those moments there was no getting away from the feeling that Spurs really could have done with having you-know-who in their starting XI. But then Son scored, threatened to do so a couple of times afterwards through his combination of quick and clever movement and ultimately showed he can be Spurs’ central man in more ways than one.

His was a striking display among many others in white, with no one impressing more for the hosts than Japhet Tanganga. The 22-year-old was excellent at right‑back, all but muscling Raheem Sterling out of the contest and rightly earning a standing ovation on his substitution on 83 minutes.

The fans were on their feet again at the final whistle and, while for them there remains the dread of losing Kane, who was reportedly in attendance, there was enough here for them to believe all will be OK under Nuno – a team willing to fight and thrive for the new manager and as part of which the Son will continue to shine.